HomeThe Shuffle10 Tips To Kick Off Your College Football Bet

10 Tips To Kick Off Your College Football Bet 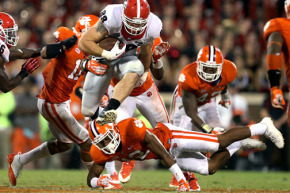 As you plan your wagers for the season, here are 10 tips that should leave you “bettor” off:

What is their fourth-quarter composure? Do they pour it on a vanquished foe or ease up when the game is won? Stay focused—you will find some games that reveal a strong angle and maybe the chance to double a bet.

Especially for a favored team in a mismatch. If you take the over, you’d like the best team’s defense to at least be a little suspect.

A college team was once favored by more than 70 points!

Alabama has wavered between a 25- and 30-point favorite for its season-opener against Louisville. Key variable: How Louisville quarterback Lamar Jackson going pro, with the Baltimore Ravens, affects this line. Key second variable: The game is at a neutral site in Florida. Edge to the dog, but how much?

5. The lines are designed to figuratively produce a tie game.

Alabama scored more than 40 points four times, over 50 twice and even had a 66-point game last year. Yet the national champs were 6-7-1 against the spread. The blowout is already incorporated into the line. Your question is whether or not it will go higher.

Some inferior squads will quit in the second half of games in which they are over-matched. Know if a team you like fits that bill.

7. Best games of the opening week.

Tenth-ranked Auburn takes on sixth-ranked Washington on September 1. Auburn is the only team to beat Alabama last year. Notre Dame and Michigan State, number 11 and 14, respectively, go at it…but…

8. Rankings in the first week or two are misleading.

How can you be in the top 10? You haven’t played. This is a great misdirection play, a chance to go against a bogus nationally ranked team.

A points-above expectation index revealed that the teams that elevated their game most in front of their home fans are Louisiana Tech, Kansas State, Colorado, Arizona State and Marshall. They go about a field goal better than normal stats would point to. Alabama and Wisconsin don’t make that list, but do improve dramatically when they play a tough team at home.

If people knew everything about betting, they wouldn’t tell you. Track injuries and weather. When you get a hunch, bet a bunch.