The upside is too obvious to pass up, with Tiger in familiar territory, and McIlroy and DeChambeau angling for an edge. Read on for details about this weekend’s action from TPC Park in San Francisco.

This par 70 course measures 7,251 yards, features Bentgrass greens, seven par 4 holes that are 460-plus yards, a par 5 over 600 and a par 3 over 250. Tight fairways and doglegs will make life difficult for inaccurate golfers off the tee, but large greens should allow expert putters the opportunity to shine.

Woods has won an event at this course in the past, and has four PGA Championships to his name. Since this course has comparisons to Torrey Pines and Woods has an immaculate course history there, this is certainly an odds boost to take advantage of, especially since he should be very fresh after playing in one previous tournament over the last six months.

Woods finished 40th at the Memorial Tournament in his last outing, but his history at this course can’t be ignored. He won a 2005 World Golf Championship there and dominated the 2009 Presidents Cup when he went 5-0-0 with partner Steve Stricker.

“This is what I’ve been gearing up for,” Woods told ESPN this week. ”We’ve got a lot of big events starting from here, so looking forward to it. This is going to be a fun test for all of us. The rough is up. The fairways are much more narrow.” He went on to explain that he recently made some changes to his game, saying he’s “very enthusiastic about some of the changes I’ve made and so that’s been positive.”

That’s all I needed to hear. Bet on Woods to bring it this week.

Reading the fine print and going through the signup process on new sportsbooks is never fun. But when you can literally get free money by taking advantage of exclusive risk-free offers, it’s worth it. Sign up with BetQL today. 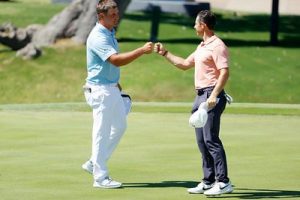 With these odds, you’re not only betting on two guys with immense talent, but who have golf games that suit this course well. Due to DeChambeau’s ability to out-drive the entire field based not only on length but also in accuracy, he should be in contention this week.

McIlroy also expressed comfort in returning to Harding Park. “It’s nice going back to venues you’ve enjoyed and had success on, it gives you good energy. Some of the best players seem to have success on the same tracks; Tiger [Woods] has won half of his PGA Tour events on five courses. You are going to get places that just fit you better than others,” McIlroy told the U.K. Guardian.

Although Rory has certainly not lived up to his standards since the PGA Tour season resumed, he’s bound to break out at some point. McIlroy hasn’t won a major since 2014, so he’s certainly due for a big win. Could this be the week?

It would not be a huge surprise if either of these golfers ended up winning the entire tournament, let alone finishing in the Top 10. While golf results have a lot of variability, expect these guys to be extra focused since their legacies are ultimately in play.