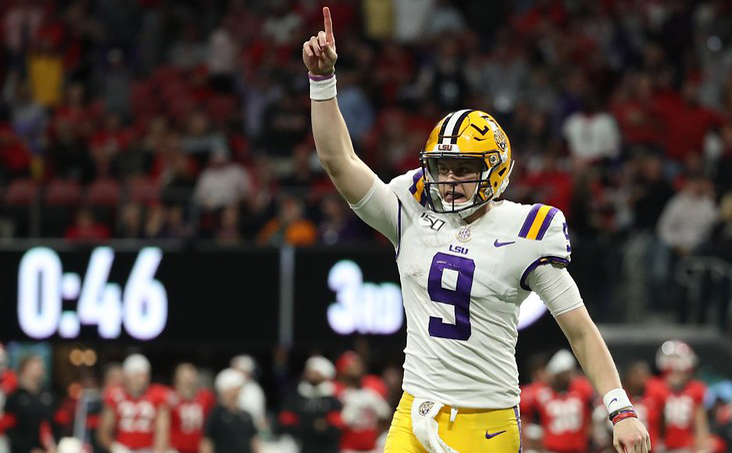 Every college football player dreams of making the NFL Draft Top 5. Who’ll be lucky enough to make the grade this Thursday? We call ’em right here.

Burrow’s hot streak didn’t end there, however, as the newly labeled “Tiger King” is all but a lock to go first overall in this Thursday’s draft to the Cincinnati Bengals. Going from big cat team to big cat team, Burrow’s sure to hang onto this nickname.

Let’s move on to some other early first-round picks.

Sign up to play at BetMGM.com, and choose your NFL Draft picks for a chance to win $2,000. Think you have a good idea of what will happen? Opt into this free contest!

As mentioned above, LSU QB Joe Burrow seems likely to become Cincy’s savior and kickstart the Bengals’ rebuild with some young weapons around him on offense. Whatever the house is, go right ahead and bet on Burrow being top man this year.

This one isn’t up in the air either. Barring unexpected developments, you can all but book Ohio State DE Chase Young to come off the board at #2. Young spent about half the season as the consensus #1 pick before a suspension and the Joe Burrow breakout knocked him down a spot in the projections. The rising star edge rusher seems a sure bet to become a Pro Bowler or at least a regular starter and contributor. Take a chance on Young to be the #2 pick.

This one seems pretty settled as well. Chase Young’s defensive counterpart at Ohio State, CB Jeff Okudah, seems ready to step right into the league and put receivers on an island. Okudah was an absolute lockdown corner all year for the Buckeyes, and figures to do the same for Detroit, which just traded away its #1 CB Darius Slay to Philly.

Create your player account at BorgataOnline.com, and your first deposit will be matched 100% up to $600! You’ll also get $20 on the house, just to get you started!

And in the final surefire pick, New York appears locked in on Clemson LB Isaiah Simmons. In most other drafts, Simmons would be a big-time contender to go first overall. He played almost every defensive position for Clemson this season at an elite level and could honestly have gone Top 5 at a number of positions had he declared differently. Simmons is one of my favorite players in this draft. He’ll add tremendous versatility to the young Giants defense, which needs a leader to build around. Simmons couldn’t be a better candidate for the Big Apple.

This is where the draft really starts to get interesting. Miami will be the main character of the show this year, featuring 14 draft picks, five of which fall in the first two rounds. They’re widely expected to take the second QB off the board with this #5 pick, but which candidate they’ll choose remains to be seen. This seems to be a toss-up between Alabama QB Tua Tagovailoa and Oregon QB Justin Herbert. ESPN’s Mel Kiper reports that, although Miami originally targeted Tagovailoa, Herbert is now tops on their radar. Herbert was projected as top QB in last year’s draft, but decided to stay another year at Oregon to improve his draft stock. He may or may not have been successful, but the 6-foot-6-inch gunslinger figures to be a strong QB in the NFL.

Whatever QB Miami leaves on the board won’t have to wait too long, as the Chargers will most likely scoop that player up here at #6. After watching longtime franchise QB Philip Rivers jump ship to Indianapolis, the Chargers suddenly need a QB for the first time in more than a decade. Unless they trade the pick, they’ll most likely be getting a very talented one with the sixth. As of now, that player figures to be Tagovailoa, who’s won a national championship and was considered one of the best players in college football throughout his time as a starter. Utah State signal caller Jordan Love also has an outside shot to be the third QB selected, but it’s more than likely he’ll have to wait to become the fourth.

Early WR Talent
This draft features one of the best wide-receiver classes in recent history. That class includes clear-cut top three prospects in Alabama WRs Jerry Jeudy and Henry Ruggs III as well as Oklahoma WR CeeDee Lamb. It’s unclear where these three will be selected and in what order, but expect them to all be off the board by the early 20s. There’s a second tier of strong WRs that all figure to go in the first two rounds. They include LSU WR Justin Jefferson, Arizona State WR Brandon Aiyuk, Baylor WR Denzel Mims, and Penn State WR KJ Hamler. These players are all expected to contribute to their NFL teams right away. They all offer unique skillsets that their teams will be thrilled to add.

As the Tampa Bay Buccaneers begin the Tom Brady era, they head into their first draft building around the QB. It’s widely believed that they’ll look to protect him with offensive line help early in the draft, and with six other picks throughout the draft, it’ll be interesting to see how they decide to complement the future Hall of Famer.

THANK GOD for this NFL Draft. In arguably the worst and darkest time in sports history, this event offers sports fans some relief. We finally have something to look forward to besides the Michael Jordan documentary. Enjoy the return of sports, even if it’s only a draft, and continue to stay safe from Covid-19.