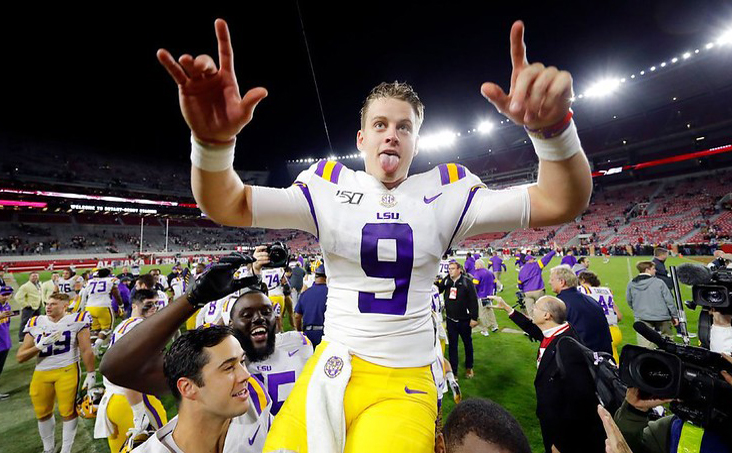 Now that all seven rounds of the NFL Draft are complete, which teams took in the best haul? And what do these additions mean for each roster? Justin Epifanio breaks it down, as we all wait for real games and real sports betting to resume.

The NFL Draft was must-watch TV. For three glorious nights. U.S. sports fans had something to watch and bet on, and there was no shortage of excitement surrounding this year’s moves. Let’s take a look.

The Giants decided to go offensive tackle at #4, selecting Georgia’s Andrew Thomas and allowing their projected pick Clemson LB Isaiah Simmons to slide all the way to Arizona at #8.

Back-to-back QBs did indeed go at #5 and #6, as Miami took Alabama QB Tua Tagovailoa and the Chargers went with Oregon QB Justin Herbert.

Rounding out the Top 10, Carolina addressed a need at DT with Auburn’s Derrick Brown at pick #7. The Jaguars went secondary with pick #9, as they took Florida CB CJ Henderson. And the Browns shored up their O-line with the 10th pick as they selected Alabama OT Jedrick Willis Jr.

It took until #12 for this year’s highly touted WR class to begin coming off the board. But once the Las Vegas Raiders took Alabama WR Henry Ruggs (l.) with that 12th pick, the receivers began to fly off the board.

Denver took Ruggs’ college teammate Jerry Jeudy three picks later, and would go on to pair him with Penn State WR KJ Hamler in the next round.

Many people considered Oklahoma WR CeeDee Lamb to be the best in this class and potentially a franchise-altering player, which is why it was unexpected to see him slide all the way to pick #17. But Dallas made no mistake, selecting the uber-athletic deep threat to pair with star WR Amari Cooper. This served as a win-win for the Cowboys, as they also kept Lamb away from division rival Philadelphia, who were likely hoping the young pass catcher would fall to them at #21.

The Eagles still decided to go WR though, as they took TCU speedster Jalen Reagor over LSU slot man Justin Jefferson, who fell all the way to #22 and the Vikings.

And finally, the sixth and final receiver selected in Thursday’s first round was Arizona State’s Brandon Aiyuk, who can now call San Francisco home. This position continued to come off the board at a high rate throughout the evening, which came as a surprise to none.

With this draft, it was believed that three QBs would be taken in the Top 6 (as they did). After that, Utah State’s Jordan Love (l.) figured to go in the late 1st/early 2nd round. And once these four QBs were gone, it would be a huge question mark as to where the remaining QBs would fall.

Well, after the Top 3, indeed there was a wait before the fourth would go. But finally, at pick #26, the Packers decided to trade up and grab an eventual heir to their aging franchise QB Aaron Rodgers. They took Love, and many people took to social media to express their disbelief as Green Bay finally began to turn the page on the Rodgers era.

If these people thought they couldn’t believe the Green Bay QB pick, they were in for quite a shock the next day, as the next QB didn’t go until pick #53 in the second round. This is when the Eagles, led by 27-year old franchise QB Carson Wentz, decided to take star Alabama Crimson Tide-turned-Oklahoma Sooner QB Jalen Hurts.

Hurts is a proven winner and competitor, and is a well-documented great teammate, all traits that will fit in perfectly in the City of Brotherly Love. So while the pick appeared confusing at first, the Eagles will be thrilled to have a strong backup QB for years to come, especially after the team’s recent reliance on that position.

While Hurts went a little higher in the draft than people expected, two big-name QBs saw the opposite effects on their respective draft stocks. Washington QB Jacob Eason and Georgia QB Jake Fromm were both projected as 2nd or 3rd round picks, but would have to watch as Hurts was the only QB to go in round two, and no more would come off the board in the third.

With pretty much every team either set at QB or having already drafted their new guy, Eason and Fromm found themselves in a pretty frustrating spot. But Eason ended up getting the call from Indianapolis in the fourth round, as did Fromm from Buffalo in the fifth.

Fingers Crossed for A Full Season
So, the draft is done. NFL teams have their rosters filled out for the most part. Now all we can do is stay inside and hope the season happens, preferably on time. Let’s pray the next major sporting event that we’re talking about isn’t the NBA Draft and we can see a game or two in the near future.

How to Play Baccarat