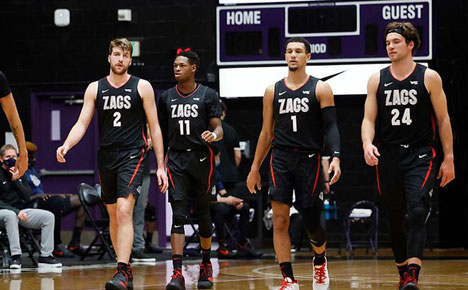 Most NCAA teams have played two or three games by now. Yes, it’s early in the season, but it’s never too soon to predict this year’s Final Four based on the action so far.

Contenders’ odds are lower now than they will be for a long time, if not all year. So check these Final Four picks, and get in some futures bets now.

Despite losing three starters to the NBA after losing the national championship game, the Gonzaga Bulldogs have retained their spot as title favorites this season.

The Zags have a solid group of returners, filling up four starting spots. Joining that group is the Class of 2021’s No. 1 recruit, Chet Holmgren, who’s quickly becoming a stat-sheet stuffer.

A couple more highly-touted recruits, guards Hunter Sallis and Nolan Hickman, will be the Bulldogs’ most important bench players, and are ready to contribute in their freshman seasons.

A combination of top young talent and experienced returning players should take Gonzaga far in this year’s tournament. While upsets are always possible, this team looks as upset-proof as any.

Are you ready to hit the court? Join Unibet Sportsbook today. Once you add funds, your first cash bet is insured up to $500 if you don’t hit a winner. 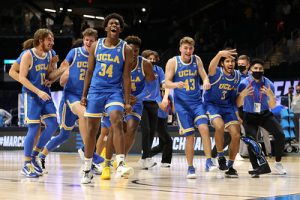 The UCLA Bruins made a surprise appearance at the Final Four last year; an 11-seed in 2020, they made the play-in round, then rattled off five straight wins to advance to the Final Four. There they faced off against the title favorites, the aforementioned Gonzaga Bulldogs, and took them right to the final buzzer. Gonzaga needed a half-court buzzer-beater from star guard Jalen Suggs to knock off 2021’s Cinderellas and advance to the title game.

This season, UCLA is loaded, and likely to make another deep run. And this time, no one will be surprised. Four upperclassmen with draft prospects have already led the team to a big early season victory over the #4 Villanova Wildcats. Look for plenty more big wins from this group—some of them next March.

Hoop dreams come true at PlaySugarHouse. Sign up to wager today, and your first deposit will be matched, dollar for dollar, up to $250. 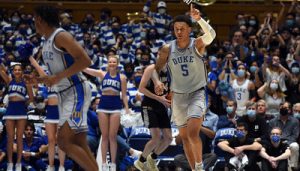 Duke Blue Devils freshmen Paolo Banchero and Trevor Keels are right at home on the NCAA court. Along with junior Wendell Moore, they have been outstanding so far this season, propelling Duke to a 4-0 start, including an opening night win over another impressive young squad, the #10 Kentucky Wildcats.

Similar to Gonzaga (if to a lesser degree), Duke has a nice balance of returners and freshmen talent. And that combination usually means a trip to the Final Four. All year, look for Banchero to make his case against Gonzaga’s Holmgren for top pick in the upcoming NBA Draft. It’s safe to predict plenty of fireworks from the Blue Devils this season. 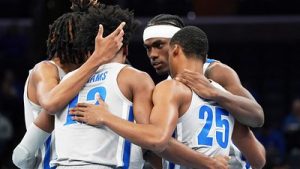 The Memphis Tigers are a very young team with a ton of potential. Two freshmen—forward Emoni Bates and center Jalen Duren—are the team’s best players. Both would be candidates to go Top 5 in the upcoming NBA Draft if Bates were old enough (re-classified from a high school senior to a college freshman).

The Tigers’ returning players will support these “Diaper Dandies,” with Tyler Harris, kid brother of Philadelphia 76er Tobias Harris, coming off the bench. If these freshmen hit their stride and stay consistent throughout the season, and if they get supporting contributions from the returners, the team is as strong a candidate to make a Final Four run as anyone.

Swish! Get up to $500 in Bet Credits when you create a new player account at Bet365! Sign up and get in those NCAA futures.

As is usually the case in college basketball—aside from the green and yellow Baylor Bears winning the national championship game last year—it’s a good year for blue teams. These four squads are all loaded with tons of potential. Bet your Final Four futures now, before the odds drop. Enjoy the season and good luck.

Justin Epifanio has a handle on sports and sports betting. Read him every week at iGamingPlayer.