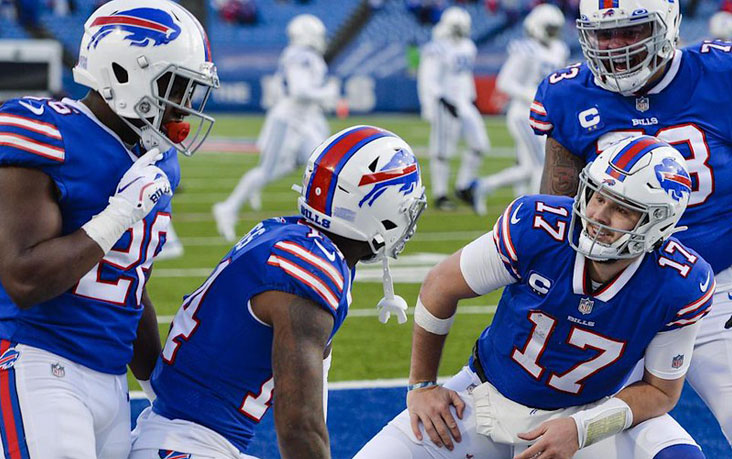 Seven weeks down. Eleven to go. NFL division races are taking shape. Which teams will finish on top and make the postseason?

With a third of the 2021-22 NFL season behind us (read our past coverage here), it’s getting clear which teams will be competing for a division title and playoff spot. Let’s see who’s in line for a division championship and a spot in the postseason.

The Buffalo Bills were up 9-0 in Q1 of the AFC Championship game a season ago. They had a real chance to make it to the Super Bowl. And while they were unable to hold on, they look like legitimate contenders to do so this time around. QB Josh Allen is again looking like an MVP, and he’s leading one of the NFL’s most effective offenses. This team will definitely win the division, but if the defense can go from average to at least good, Buffalo may be the AFC’s last team standing.

Take the Bills to win the AFC East at BetAmerica. Bet $50 and Get $50 on your first sports wager. Just create your new-player account, make a deposit, and get the same amount to double your play.

The NFL’s best rushing offense is led by a quarterback, not a running back. The Baltimore Ravens’ Lamar Jackson has been on a mission since his top two running backs went down for the year in preseason. Jackson’s been effective both on the ground and in the air, and his offense is nicely complemented by the always-solid Ravens defense. The Cincinnati Bengals and Cleveland Browns aren’t going to make it easy, but the Ravens know how to make it to the playoffs, and should be able to get it done again this season.

Whether you’re rooting for the Ravens, the Bengals or the Browns, get a 20% NFL Parlay Profit Boost at BetRivers! Log in any Sunday to cash in on this big deal.

Only one man seems to matter in this division, year in and year out: Derrick Henry. The Tennessee Titans running back is making a serious case to become the first RB/non-QB to win MVP since Adrian Peterson in 2012. This is the best the Tennessee offense has looked in a while, and the defense has been getting the job done. There shouldn’t be much resistance from the Titans’ division foes this season. Expect an easy division title for Tennessee this year.

After a rough start to the new campaign, Pat Mahomes & Co. have to find a way to turn it around—and fast. The L.A. Chargers are looking like a strong bet to beat out the KC Chiefs in the division this year, but the Las Vegas Raiders are sitting in first place! I don’t expect Vegas to hang around much longer, but Justin Herbert and the Chargers will give the Chiefs a run, right down to the end. Both LA and KC are playoff teams this year, but for now I’ll keep a slight edge with the team that’s made the last two Super Bowls, and won one of them.

Every year, the Dallas Cowboys have a star-studded offense. It gives everybody false hope, then leads to disappointment when the defense can’t keep up the pace. This year, the Cowboys’ defense has actually been good, however, led by Trevon Diggs and his current pace of one interception a game. Dak Prescott has the offense looking as efficient as ever, so the Cowboys might actually make some noise in the playoffs this year. Like Tennessee’s situation, Dallas doesn’t have much competition for the division title. For once, the NFC East race should be pretty drama-free.

Get a Risk-Free Bet on Cowboys-Vikings at PointsBet! If your first bet on Dallas vs. Minnesota loses on October 31, you’ll get a free bet refund up to $20 in free bets!

Another runaway race, Aaron Rodgers and the ‘Last Dance’ Green Bay Packers are already off to a three-game lead in the division. With no promise of a reunion next season, this team is hungry to finally plunge into the Super Bowl that they’ve been on the brink of for years now. This should be a landslide victory for Green Bay.

Tom Brady just will not be denied, ever. He may still be winning Super Bowls when he is 70. Yet again, he and the Tampa Bay Buccaneers find themselves sitting atop their division, comfortably and confidently. Arguably still the NFL’s best roster from when they lifted the Lombardi Trophy earlier this year, the Bucs may just repeat as champions of the NFL. With the first step being a division title, I don’t see anything standing in Tampa’s way this season.

Despite sitting behind the NFL’s final undefeated team, the Arizona Cardinals, in the division standings the L.A. Rams still have arguably the most well-rounded roster in the league. They are effective on all levels of defense, to go with a very effective offense led by newly acquired QB Matt Stafford. The time may just be right to take a flier for the Rams to win the Super Bowl (+850). For now, I like L.A. to overtake Arizona and win the division.

Picking the Rams to go all the way? Get NFL One-Game Parlay Insurance at BetMGM. Just opt in and place a wager with four legs or more. Miss a leg, and you’ll get up to $25 back.

While a lot of these teams already stand as betting favorites to win their respective divisions, you can do very well if you parlay them together. If you take all eight of these teams to win their divisions at +2403 for $100, your payout would be $2,502.71 at the end of the season (odds from Caesars Sportsbook). For mostly favorites, that’s definitely not too shabby! Best of luck to you and enjoy the NFL action.