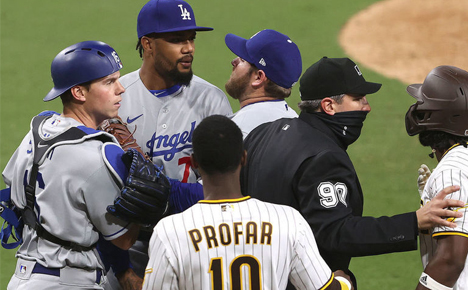 Major League Baseball is known for historic rivalries. The Yankees/Red Sox feud ain’t what it used to be, but there are plenty more to take its place this season.

Major League Baseball is known for historic team rivalries. And while the legendary New York Yankees/Boston Red Sox feud ain’t what it used to be, there are plenty more big, intense, juicy MLB rivalries to take its place.

In a long MLB season, there are tons of reasons that team hostilities crop up. Players who admire their own home runs. Pitchers who hit batters on purpose. In just a few weeks of early regular-season action, things are already heating up among this year’s antagonists.

Let’s take a look at which matchups are most likely to turn ugly. 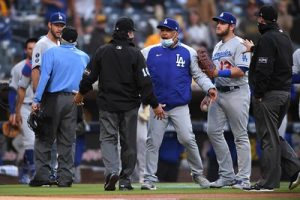 This is the biggest rivalry in the MLB right now. The Los Angeles Dodgers and San Diego Padres are the two best teams in the sport, and they happen to play in the same division.

As a result, they’re scheduled to face off 19 times throughout the year, ensuring tons of high-intensity baseball. With the first three matchups behind them, the Dodgers are up two games to one, and there’s already been a cross-field shouting match. This weekend series was real edge-of-your-seat material: a 12-inning game followed by two more back-and-forth matches.

In the heat of the moment, Dodgers pitcher Clayton Kershaw started yelling from the dugout to first base, where Padres infielder Jurickson Profar, had just reached on a catcher’s interference call. Profar gave it back, then stalked towards the L.A. dugout, sparking even more tension.

Thanks to this epic showdown, baseball was last weekend’s most wagered on sport by total handle and bets, per PlaySugarHouse.com. Corey Seager was the hero, jacking a two-run HR to give the Dodgers an 8-6 lead. Bettors backing Seager (+600 to hit a HR) were rewarded handsomely, like the bettor who wagered $225 for a payout of $1,575.

It’s still early in the season, but this rivalry has potential for greatness—now, and in the years to come. For now, the defending champs in L.A. hold the slight advantage. 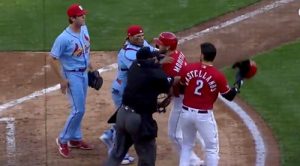 Fiery Cincinnati Reds outfielder Nick Castellanos initiated the first bench-clearing brawl of the 2021 MLB season. After being hit by a pitch—seemingly on purpose— Castellanos later flexed in the face of the guilty party, Jake Woodford of the St. Louis Cardinals, at home plate.

The fracas drew both benches from their dugouts, and plenty of words and shoves were exchanged over the course of the next 10 or so minutes. The Reds and Cards both were playoff teams a season ago, and both hope to return this year. But they might stand in each other’s way.

With 16 more matchups pending, and lots of scores to be settled, watch for these clubs to generate plenty more fireworks in 2021.

PointsBet.com offers home run insurance when the Phillies play the Giants. Bet any player to hit a home run. You’ll get back up to $25 in free bets if that player fails to hit a homer, but the team wins! 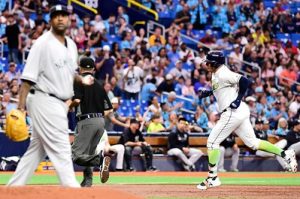 The teams have met countless times in key late-season and playoff series, a trend that doesn’t seem to be ending soon. Whenever the teams square off, the Rays’ pitching prowess and the Yankees’ electric lineup make for an exciting contest. Tampa’s fresh off a weekend road sweep of the Bronx Bombers, but both teams have struggled out of the gate.

As the season progresses and both clubs hit their stride, expect some heated matchups between two of baseball’s premier teams. While the Rays have the edge for now, the Yanks will have a thing or two to say about it by season’s end.

Your next bet’s on the Nugget. Sign up at GoldenNuggetCasino.com, and you’ll get up to a $250 free bet as a new player. 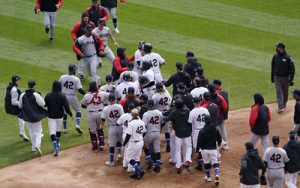 The other bench-clearing brawl of the season took place between a couple of AL Central foes. This one was more competitive than personal. Chicago White Sox right fielder Adam Eaton shoved Cleveland Indians shortstop Andrés Giménez out of frustration after a hard tag at second base.

Second baseman Cesar Hernandez jumped between the two and started jawing at Eaton. That prompted the benches and bullpens to join the party. The skirmish continued, but ultimately, nothing major transpired, and the game resumed.

This division rivalry is bound to supply more antics over the team’s double-digit remaining matchups. The Chicago Southsiders probably have the edge due to an explosive lineup. But Cleveland always finds a way into the postseason. There’ll be a lot more fun between these sides this season.

The season’s just three weeks long, and already, fans have been treated to two bench-clearing brawls. Add it up, and that puts us on pace for 18 this season. I think I speak for all MLB fans when I say, “Bring on the brawls!” When teams hate each other, they play better ball. Fans can’t ask for more than high-intensity innings and a mound-charge or two.

Enjoy all the action and keep a close eye on key division rivalries. They’re rich with playoff implications.

Get a 20% MLB Profit Boost every Wednesday through April 28 at PlaySugarHouse.com. Odds must be -200 or greater.

Per BetMGM, the current odds to win the World Series are:

And keep an eye on these sleepers:

Baseball is back! Read iGamingPlayer for deep insights into the 2021 MLB season.