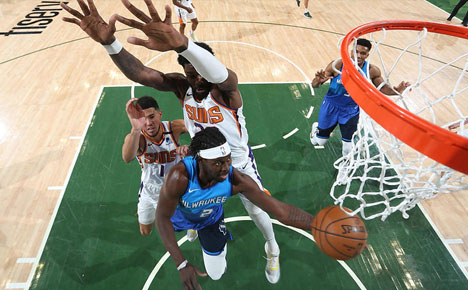 In the NBA Finals, the Phoenix Suns and Milwaukee Bucks are the last teams standing—and the unlikeliest. Who will raise the Larry O’Brien trophy in the coming weeks?

It’s been a unique NBA season, to say the least. Players got virtually no offseason after last summer’s Orlando bubble postseason, and much of the current regular season was spent coping with or relaxing Covid-19 restrictions.

But underdog teams found a way to thrive all year, right down to a the unexpected Finals matchup of Phoenix Suns/Milwaukee Bucks.

Sure, a lot of fans hoped to see Lakers/Nets this year, but these finalists have earned their berth. They’re exciting teams featuring several players making their first try for a ring.

Here are the most intriguing and important matchups to watch in this series, after a close Game 1 victory for the home Phoenix side.

Each NBA Finals team is led by a clear duo. Phoenix’s star tandem makes up its backcourt: Chris Paul and Devin Booker, while Milwaukee gets its main production from the forward spots: Khris Middleton and Giannis Antetokounmpo.

The Game 1 edge went to Phoenix, as Paul took the clear Finals MVP lead with 32 points and nine assists. Paul’s teammate Booker was probably second best out of these four, and whenever that happens, don’t expect Milwaukee to win. While Giannis is the best player of the four and could win a game or two by himself, Phoenix has the edge here. Its backcourt is smoking hot. Expect plenty more FMVP material from CP3 throughout the series, as he’s starving for that first Finals ring.

Battle in the Paint

The battle in the paint is usually a pretty solid barometer for how the game as a whole is going. Dominating down low and on the glass opens everything else up for your team, and makes it much harder to lose.

In Game 1, Suns center Deandre Ayton posted 22 points and 19 rebounds, while opposing center Brook Lopez countered with 17/6. There’s a clear advantage in this category for Phoenix, and Milwaukee should consider increasing Giannis’ minutes at center as a result.

The Bucks perennial MVP candidate grabbed 17 rebounds of his own in Game 1, and can counter Ayton’s dominance in the paint. He’s not a full-time center, but this change could swing momentum back in the Bucks’ favor. For now, though, Deandre gives Phoenix a clear advantage.

The Suns and Bucks are two of the deepest teams in the NBA, and production from the second unit has been key to both squads’ postseason runs. It’s like an annual tradition that at least one bench player has a signature game/moment in the Finals. So with plenty of bench action coming up, who holds the advantage?

Both benches gave their team 22 points on Tuesday night. Milwaukee spread these 22 out across all four bench players rather evenly. Meanwhile, Phoenix brought five players off the bench, and only two were factors scoring the ball. Milwaukee’s boasted one of the league’s strongest benches for a few years now, and it’s finally time for that to pay dividends. The second unit might be able to steal the Bucks a game in this series. Keep an eye on what may turn out to be one of the most significant matchups of the series.

Bet at least $25 on the first-half point spread in Game 2 of the NBA Finals at WilliamHill.com. If you win, you’ll earn a Free Bet equal to your team’s first half point total!

These two have both been NBA head coaches for several years, but have yet to capture a title. That will finally change for one of these two sideline generals, but who has the edge?

Mike Budenholzer has two Coach of the Year awards to Williams’ zero, and has had much more success in recent years. Both are considered among the best in the industry and rightfully so, but Budenholzer holds a slight advantage. With better coaching and a better bench, it’ll be exciting to watch how Milwaukee tries to scheme its way into the driver’s seat of this Finals.

It is tough to separate these teams on paper, as this looks like a very evenly matched NBA Finals. At the end of the day, Phoenix has better veteran leadership and is hungrier to win.

The Suns are making winning plays and are the more cohesive unit on the floor. The lengths to which Chris Paul will go for his first Finals ring shouldn’t be discounted, and for these reasons I’m taking Phoenix to win their franchise’s first NBA Finals.

Here are the current NBA Finals odds from William Hill:

Get a 10% Boost Token on any NBA Parlay at BetMGM.com. This offer is available for all players. Minimum two legs.