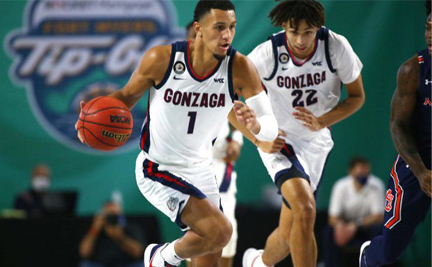 The NCAA Tournament bracket is set, and it’s now on us to figure out who’s going to win the 2021 National Championship. With a little help from our friends, here are our 2021 NCAA tournament picks.

There are different ways sports bettors have predicted who’ll go the furthest in their brackets, but one proven method is to use KenPom’s advanced metrics to create a short list of title contenders.

Ken Pomery’s website is the holy grail of college basketball statistics. Since its inception in 2002, KenPom’s numbers have become so intertwined with the sports betting market that most of his projected scores create the initial spread and total at sportsbooks.

Sports bettors are so in tune with the metrics, that they have figured out a threshold most teams have to fall into to win a National Championship.

Since 2002, every team that’s cut down the nets has placed inside of KenPom’s Top 20 in both offensive and defensive efficiency. There’s one outlier: the 2014 Connecticut Huskies, who were 39th in KenPom’s offensive efficiency mark, the only team outside this threshold.

Here are the teams that rank Top 20 in offensive and defensive efficiency, and others knocking on the door. You’ll notice one glaring omission: the Baylor Bears, who have the second shortest odds to win the National Championship at BetMGM (+500).

Get BetQL’s best bets for March Madness! Dating back a full calendar year, its five-star (max-value) bets have won 61% of the time! 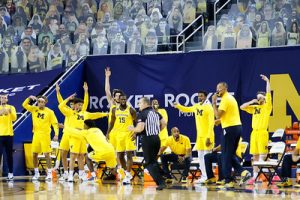 It’s worth noting that these rankings change with every game and more information being fed into KenPom. However, as it stands now, four teams qualify as national title contenders: the Gonzaga Bulldogs, the Michigan Wolverines, Illinois’ Fighting Illini, and the Houston Cougars.

Gonzaga’s been the prohibitive favorite to cut down the net all season, and the numbers don’t lie. The Bulldogs are the No. 1 team in KenPom, ranking No. 1 in offensive efficiency and No. 10 in defensive efficiency.

Elsewhere, Michigan looked to be a formidable threat to the Bulldogs, but the injury to forward Isaiah Livers could be a crushing blow to the Wolverines’ title hopes, though they’re sitting inside the Top 10 in both offensive and defensive efficiency.

Illinois and Houston are both KenPom darlings, and the two are on a collision course for an Elite 8 matchup in the Midwest region. Houston’s the only team rated Top 20 in offensive and defensive efficiency that didn’t earn a No. 1 seed in the NCAA Tournament. 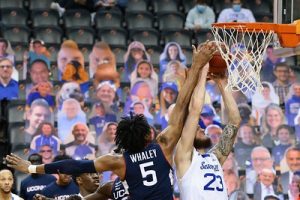 As I mentioned earlier, these numbers are ever-changing and several teams are just outside the Top 20 with an opportunity to play themselves into the threshold with a deep tournament run. I included teams inside KenPom’s Top 40 in both offensive and defensive efficiency.

These clubs can be smart value bets throughout the tournament. Michigan is likely to be short-handed, and four teams in the bottom half of their bracket are knocking on the door of the KenPom Top 20.

A potential second-round meeting between Connecticut and Alabama’s Crimson Tide will be interesting. UConn is a bit more balanced, while Alabama has an elite defense to go with its three-point reliant offense. Despite being a No. 7 seed, UConn ranks Top 25 in both offensive and defensive efficiency. If you believe in this theory, there’s some value on the UConn Huskies 33-1 to win it all at (link) BetMGM.

Two other teams inside the Top 40 in the East bracket could meet in Round 2” the Texas Longhorns and the BYU Cougars. The teams aren’t elite on either side of the ball at their current marks, but they don’t have glaring weaknesses, either.

The bottom half of the East region is loaded with near-KenPom darlings, and would be on a path to face a vulnerable Michigan team in the Elite 8.

Visit GoldenNuggetCasino.com, place a bet on any sportsbook market at minimum odds -200, and the Nugget will match your stake with a Free Bet up to $250. What a way to double down! 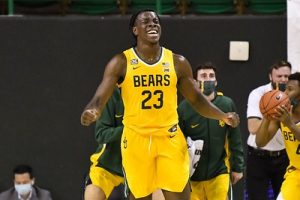 Now we get to the shocker. You’re probably wondering why Baylor, the clear No. 2 team in the country all season, isn’t on the list.

Bears’ play has dropped considerably since the team returned from its Covid-19 pause a few weeks ago. Baylor is 44th in KenPom’s adjusted defense metric, despite having the No. 3 offense. The Bears are also the top three-point shooting team in college basketball.

The sky isn’t falling for Baylor. It’s still the No. 1 seed in the South region, but keep an eye on the team’s defense, which has been gashed of late. Baylor’s rebounding numbers have fallen off a cliff too, down to 280th in defensive rebounding rate in the country.

Many people will pick Baylor to win the National Championship based on the team’s total body of work this season. But if you believe in the KenPom system, which has been correct every year but one since 2002, the Bears are about to bust a lot of brackets in the NCAA tournament.

Thursday’s a great day at PlaySugarHouse.com! Just log in every Thursday, and you’ll be eligible for a 20% Profit Boost for any Live Bet!