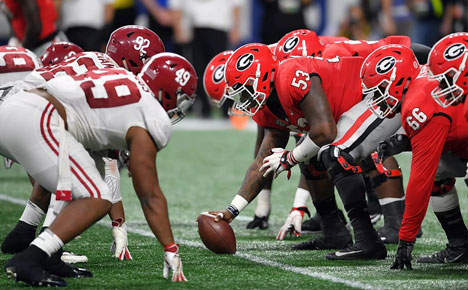 The 2021 college football season has finally come down to conference championship weekend. Here’s a preview of each big game, and our picks to win.

What this college football weekend lacks in quantity, it more than makes up in quality. That’s because this is NCAAF conference championship weekend, and all eight matchups should be intense battles.

Let’s take a look at each, and see who you can trust with the spread.

The UTSA Roadrunners and Western Kentucky Hilltoppers met earlier in the season, and UTSA was able to come out with a six-point victory, 52-46. If the Roadrunners won over WKU on the road, expect them to continue the trend in front of their home fans, for a chance at the Conference USA title. Keep in mind, the Roadrunners are coming off their first loss of the season, so a bounce-back game is in store. UTSA should be favored by a field goal, but I’ll gladly take the +1.

Bet $50, Get $50 when you sign up to wager on the NCAAF at BetAmerica! Just create an account, make your $50 deposit, and play!

When these two teams played a couple weeks ago, the Utah Utes ended the Oregon Ducks’ CFP hopes in a blowout 38-7 victory at home. While this game will be at a neutral site, Utah was the much better side in the last matchup. With the PAC-12 title on the line, Oregon will put up a fight, but look for the Utes to be able to score another victory, taking the NCAAF to Vegas.

Saturday’s slate will kick off with a dandy of a matchup in the NCAAF Big 12 Championship game. These two Top 10s will clash in what should be a high-scoring affair. Baylor Bears QB Gerry Bohanon has missed the past game and a half, and stands a chance to miss this game as well. The Oklahoma State Cowboys are hot after a big momentum-boosting W against in-state rivals the Oklahoma Sooners. For these reasons, expect the Cowboys to win this one in the home stadium of their counterparts from Dallas.

The Utah State Aggies are a solid team, but they don’t have any real signature wins this season. They’ve lost to better teams, and beaten the ones they were supposed to beat. The San Diego State Aztecs, on the other hand, have been consistent winners throughout this NCAAF season, outside of a blip on the radar against Fresno State five weeks ago. Consistency leads to postseason success. Give the Aztecs the edge.

Unquestionably, this is the NCAAF championship game with the most on the line. The Alabama Crimson Tide need to win to get into the College Football Playoff, while the Georgia Bulldogs want to maintain their unbeaten record and top spot in the CFP Rankings. Since Georgia will still most likely appear in the CFP, even with a loss, I expect the Crimson Tide to come out with a lot more fire, especially on the heels of a huge momentum-boosting quadruple OT victory in the Iron Bowl a week ago. The Tide should at absolute minimum be able to keep this one within a touchdown.

The Cincinnati Bearcats need a win to get into the CFP; I completely expect them to get one here and dance on. That said, a 10.5 point spread is disrespectful to a very solid Houston Cougars team. If the Cougars didn’t drop their season opener to Texas Tech, we’d be looking at a battle of undefeateds, with an awful lot more on the line this weekend. Houston should be able to keep this one close, despite Cincinnati’s very impressive squad.

Similar to Cincinnati, the Michigan Wolverines need a win to get into the playoff, and they should be able to get the job done. But the Iowa Hawkeyes have boasted one of the strongest defensive units all season long, and should be able to at least slow down Wolverine RB Hassan Haskins after his 5 TD explosion last week vs. Ohio State. In what figures to be a semi-low scoring matchup, the 10.5 point spread seems unattainable for Michigan. Take all the plus points you can get in this one!

In what should be one of the most evenly matched conference championship games, the Pittsburgh Panthers and Wake Forest Demon Deacons will fight to become the first non-Clemson ACC champion in six years. Both teams are just a few mistakes from being undefeated at the moment, and Wake Forest specifically made it to 8-0 before taking their first loss of the season. These teams stack up pretty evenly, but give a slight edge to the more balanced Wake Forest offensive attack, due to a superior running game. This game will be a tight one, with the Deacs either winning outright or keeping it within a field goal.

College football fans, join the team at BetRivers and your first deposit will be matched, dollar for dollar, up to $250.

All big matchups this week mean a lot of tight games. Any double-digit spreads are traps, as these games should be very competitive. Take plus points with confidence this week, and enjoy the action. One more week until the College Football Playoff is set.

The past is prologue. For informed NCAA football bets, review the season to date at iGamingPlayer.