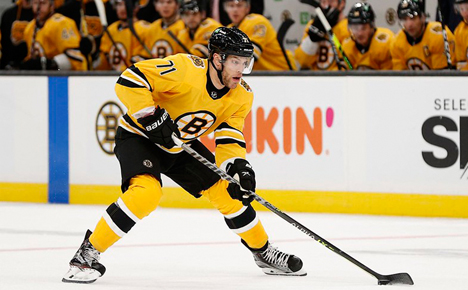 A couple weeks remain in the abbreviated NHL season, so let’s look at some Stanley Cup dark horses that could win you big bucks!

It’s been another strange NHL season, as teams rapidly approach the 56th and final game of the schedule. Let’s look for some NHL futures bets that could pay off.

Teams usually get 82 games in a year, and there are still some diamond-in-the-rough teams waiting to get hot. Let’s take a look at who can go on to lift the Stanley Cup trophy, but offer favorable odds as futures.

The Boston Bruins have been streaking since the trade deadline acquisitions of Taylor Hall, Mike Reilly and Curtis Lazar. The team has taken seven of its last 10, and seem to be getting hot at just the right moment.

OK, the Bruins’ odds have fallen victim to an East division that’s very crowded at the top of the standings. But all that goes out the window come playoff time. This team has talent on both sides of the blue line, and has maintained a solid goal differential (+20) all the way up to the postseason. The Bruins could be contenders to watch if they get into the playoffs.

Get in on NHL Fridays at PlaySugarHouse.com! Log in each Friday for a 20% Profit Boost! Max $25 Bet. Max $250 additional winnings. 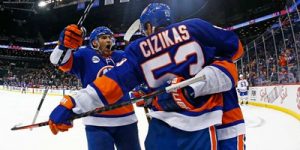 The New York Islanders are another team looking much better after the trade deadline, despite not playing tremendous hockey since.

Kyle Palmieri and Travis Zajac provide much-needed strong forward play, especially in the extended absence of captain Anders Lee. They’ve already given the team plenty of key minutes on the ice, and figure to do more of the same in the postseason.

The team also traded for defending champion Braydon Coburn for next to nothing. While Coburn doesn’t warrant a ton of playing time at this late stage in his career, he has Stanley Cup experience, which should give this locker room a huge boost.

New York’s odds are also a victim to the stacked East, plus a rough 10-game stretch for the team. Looking for a great NHL futures bet? Scoop up some stake in the Isles while they’re still on the clearance rack!

Make your first sports wager of $20 or more at BorgataOnline.com and receive $100 in free bets. Just sign up, deposit, and you’re set! 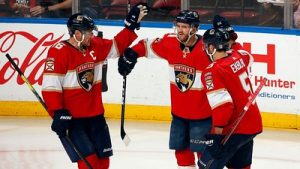 The duo of Jonathan Huberdeau and Aleksander Barkov has been deadly for the Florida Panthers. They’re a big reason the team has consistently ranked among the league’s best this season.

The Panthers rank eighth and T-13th respectively in the NHL in points, as they’ve carried the Florida offense for most of the year. The tandem of Chris Driedger and Sergei Bobrovsky in goal has also been lethal, as both have stood on their heads to earn their team victories all throughout the season.

This team is also a victim of a top-heavy division, as they have the third-best odds to win the Cup in the Central, despite holding the second-best record (two points back of first in the division and NHL).

This has been a consistent team that you can rely on come summertime.

Parlay 4 games for a free bet at WilliamHill.com. Place a 4+ leg parlay wager of at least $20 and collect your $10 Free Bet! Min. odds +300. Bet in your state New Jersey, Indiana or West Virginia. 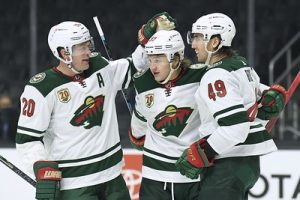 Speaking of getting hot at the right time, the Minnesota Wild have done just that. This team’s gone 8-1-1 in their past 10 games, surging them from 40 points to 65 and right in the thick of the playoff hunt.

If not for strong 10-game stretches also from the Vegas Golden Knights and Colorado Avalanche, the Wild could easily be in first place right now and looking at much different odds. This team is firing on all cylinders and has the best goal differential (+28) of any team on this list. Don’t sleep on the Wild!

So, it’s an unorthodox but exciting way to end the NHL season. Yes, the season is short, but there are now closer division races and a shorter wait for playoff hockey! Enjoy the stretch run and get those NHL futures bets in now.

Sports writer. Sports nut. Betting pro. Get ahead of the game. Read Justin Epifanio every week at iGamingPlayer. It’s easy to subscribe below.