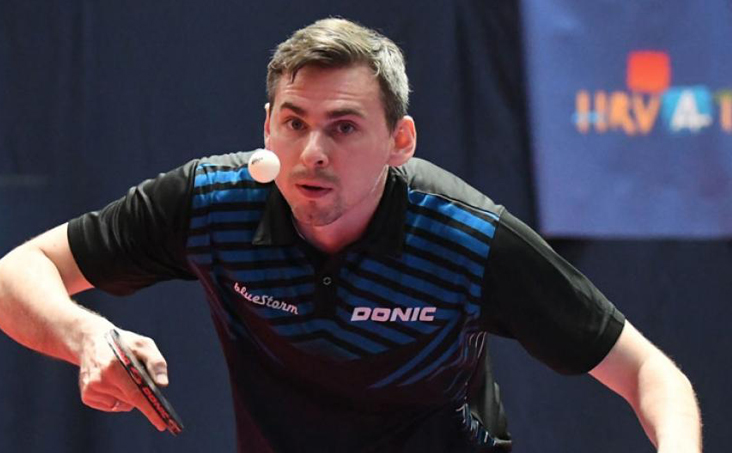 The already despised year of 2020 impacted every aspect of society, even our favorite sports. What will happen in 2021? Here’s a sneak peak, but we’ll always have the top-ranked table tennis player Skachkov Kirill (l.).

As 2020 passes blessedly into our rear view mirror, looking forward to 2021 becomes difficult because of this year’s legacy. Trying to predict how major sports are going to handle the challenges of the new year is a lesson in humility. Even those sports that have already started or are about to start have uncertainties about the 2021 outlook for sports.

So let’s look ahead to the four major sports, collegiate sports and some of the ancillary sports to see how the betting landscape will look next year.

The NBA hardwood games opened, in fits and starts, a few days before Christmas. The regular season calls for 72 games—10 less than in a normal season—concluding on May 16. The first half of the schedule has already been announced, but you won’t see the full schedule until nearly the end of the first half.

The NBA is copying NFL safety protocols for the season—which can be good or bad, depending on your viewpoint. In the middle of the NFL season, the games of several teams were shifted, resulting in unprecedented Tuesday and Wednesday games, and one game where all the quarterbacks were in lockdown.

In the first few days of the new NBA season, positive tests and violations of Covid procedures hobbled several teams. Players largely followed the strict rules during the playoffs of 2020, when everyone gathered in an Orlando bubble, but with the real world intervening, what happens if an entire team gets exposed?

The NBA All Star Game was scheduled for Indianapolis this year, but that’s been pushed forward to 2024, and details of a revised All Star Game will be announced in a few weeks.

For bettors, the first two weeks of the NBA season have seen widely varied odds on the winners of divisions and the championship. When the Brooklyn Nets blew out the Boston Celtics on Christmas, the odds on the Nets winning the championship were almost halved. So watch for wild swings and trends as the season progresses. Prop bets will also be more valuable at sites like PointsBet and BetMGM.

Good news for sports fans! At BetMGM.com, you’ll get a $500 risk-free bet when you create your new player account. Join the King of Sportsbooks today!

Since the NHL Stanley Cup championship wasn’t resolved until late July, the season will get a late start, and is now scheduled to begin on January 13. While the playoffs got great ratings, the NHL differs from all other major sports in that the club owners depend much more on in-person ticket revenues than those with massive TV contracts and more guaranteed money. Therefore, it’s more important that fans return to the stands for the league to be a financial success.

While there are only a few arenas where even partial attendance is possible right now, the NHL is preparing by reorganizing the teams into different divisions. Teams will only play the six or seven teams in that division, maximizing the potential for fans when and if the time comes. In states where even games with no fans won’t be allowed, the league has plans for neutral-site locations to come into play.

Here are the new NHL divisions: 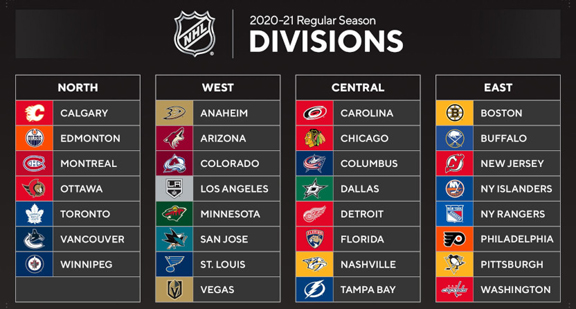 The teams will play 56 games, and the regular season will conclude on May 8. That’s a lot of games in a short time period, and the compressed schedule will wear on players, particularly the goalies. With three to five games a week, a deep bench will become invaluable.

As in the NBA, betting odds should swing wildly as the season starts but everyone is playing under the same rules to there will be no crying allowed.

Like the NBA, NCAA basketball is already under way, having started in late November. But NCAA basketball looks a lot like NCAA football. There’s lots of uncertainty about procedures, and like football, many basketball games have already been postponed or cancelled.

It’s already been a wild season, with many perennial favorites suffering debilitating schedules. The Kentucky Wildcats, always one of the premier programs, lost six of its first seven games. The Michigan State Spartans and the Indiana Hoosiers each got off to a terrible start, and the Rutgers Scarlet Knights, of all teams, defeated the Syracuse Orange and the Maryland Terrapins to make its mark.

With the 2020 Final Four being cancelled at the start of the pandemic, this year’s March Madness will be changed as well. NCAA officials are negotiating with Indianapolis to host all 68 games of the tournament. Indianapolis was slated to host the Final Four anyway, so it might make sense to bubble up for this year to ensure it gets held.

Betting wise, the wild results in the collegiate ranks make it a bettor’s paradise… or torture chamber. Rely on information here at iGamingPlayer.com to get the best of it. And even a bubble for the NCAA Final Four will not be the end of the world, at least it’s consistent.

Covid-19 and labor unrest limited Major League Baseball to a 60-game season in 2020 (a normal season is 162 games) with a raft of previously unconsidered rule changes. While the playoffs got great ratings, largely because there was little competition for your attention and a real thirst for pro baseball, only lifelong, passionate L.A. Dodgers fans consider their World Series championship as anything other than an anomaly.

But we don’t have many clues about what the 2021 season will look like. Spring training was only half over when Covid shut everything down so there’s a lot of desire to go back to normal and scrap the silly rules that were imposed for the 2020 season, but nothing has been finalized. There are some suggestions that the season will be pushed back so a late May start may allow a limited number of fans in many locations—and 140 games has been widely mentioned.

Most teams are taking a wait-and-see approach to next season when it comes to preparation. One team that’s been very aggressive is the San Diego Padres. Already a strong contender and a playoff participant in 2020, the Padres have traded for Blake Snell, whose removal from Game 7 of the World Series seemed to seal the fate of the Tampa Bay Rays. They picked up Japanese strikeout specialist Yue Darvish from the Chicago Cubs (who seem to be stripping their club of any value). Bettors will have a field day picking over/under wins and playoff odds.

The NFL made a commitment to hold a regular season in 2020, and it appears the league has accomplished that, as we approach the final weekend of the regular season. There’s been some mention of a playoff bubble, but that probably won’t happen, since the season’s had only a few minor blips when it comes to Covid violations. The NFL and the players can see the end of the road, so after February 7, when the Super Bowl concludes in Tampa, speculation will start on 2021.

First up will be the NFL Draft, scheduled for April 29 in Cleveland. As with all these schedules, who knows that the next few months are going to bring, with millions of vaccinations and herd immunity kicking in? Leading up to that date, we’ll get some clarity as to what the NFL season will hold in 2021.

As if holding the Masters Tournament in November wasn’t strange enough, how will it feel in April when the Masters is held at its usual time, meaning back-to-back Masters as Majors?

When the pandemic hit golf last year, it started at the Players Championship in Florida, which most people consider the fifth Major. It also interrupted the PGA’s new schedule for the Majors, which started with the Masters in April, the PGA in May (taking the place of the Players, which moved to March), the U.S. Open in June and finally the Open Championship in the U.K. in July. With the exception of the Open Championship, the other three Majors were played in the late summer and fall.

So the schedule for the PGA Tour is even more aggressive in 2021. Along with the four Majors, which will stay on their assigned dates at this point in time, there are two other “major” events to be undertaken next year, the Tokyo Olympics and the Ryder Cup in September at Whistling Straights in Wisconsin. Of course, the meaningless FedEx Cup will be contested as usual throughout the year, but will it be overshadowed by all the other events of 2021?

When the PGA Tour rebooted in June 2020, events were held without fans. That began to change in late 2020, when fans were returned in a limited capacity at the Bermuda Championship in October and the Houston Open in November. There will be limited tickets sold for the Hawaiian tournaments in January, but California events will be locked down. The Phoenix Open in February is planning to allow limited tickets.

So when the tour reaches Florida in March, will fans be back in any larger capacity? Hard to say, but the PGA is hoping to add increased capacity for the Masters, the PGA and the U.S. Open next year.

When golf returned in June, it attracted many more bettors than it had in the past and those bettors hung on even when football and baseball returned. So it appears likely that savvy bettors have understood the benefits and fun of betting golf, particularly in-game. Expect some new up-and-comers to break through this year by following the Bryson DeChambeau model.

To learn some Golf Betting Basics, check out our article published earlier this year: Betting on Golf: The Basics.

When the pandemic took hold in March, April and May, forcing major sports around the globe to shut down, sportsbooks got creative, and started publishing lines on obscure sports. Russian table tennis was probably the most popular. Sportsbooks tell iGamingPlayer.com that they’ll continue to post lines on most of these sports, because some bettors have become very good handicappers on these events.

So fear not, loyal bettors. Should none of the above come to pass in 2021, there will always be Skachkov Kirill, the top ranked-table tennis player in the world to bet on!