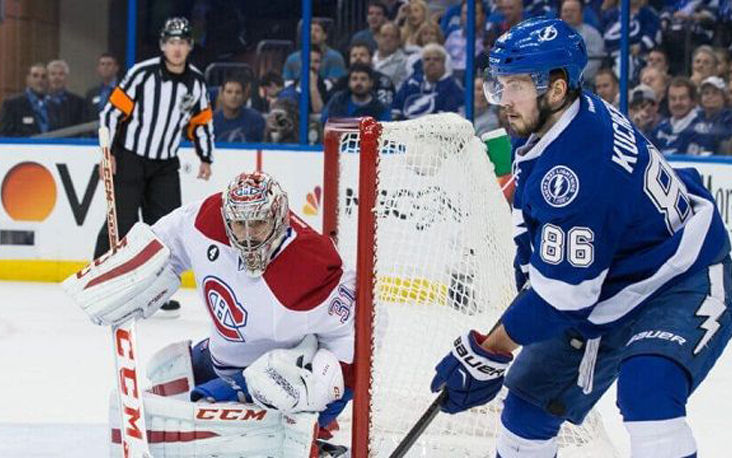 Just two of 16 teams remain in the 2021 Stanley Cup playoffs. Which organization will walk away the winners—the Tampa Bay Lightning or Montreal Canadiens?

Just two teams remain in the 2021 Stanley Cup playoffs. Which will walk away with the silver cup—the Tampa Bay Lightning or Montreal Canadiens?

Of the 14 series that have taken place so far in the NHL playoffs, only four favorites/home teams have won the series and advanced to the next round. Yes, that means the lower seed is 10/14 (71%) so far this postseason. This is good news for Montreal, the underdog for the Stanley Cup, and responsible for three of these aforementioned series upsets.

Tampa Bay, on the other hand, still holds “defending champ” honors, and used its recent playoff experience/success to great advantage in Game 1. The Lightning got a pair of third-period goals out of star forward Nikita Kucherov, to put the opening game out of reach en route to a 5-1 victory.

While Tampa looked dominant in the first game, Montreal has been playing the role of comeback kids all postseason. With the odds consistently stacked against them, they have performed. So there’s no reason to think this series is anything close to over.

Let’s take a look at some key matchups between these usual division rivals, and predict who will eventually lift that Stanley Cup trophy.

Place a straight, pregame, full game, money line wager of at least $50 on Game 3 at WilliamHill.com. Win or lose, get a $50 Free Bet if your team scores 3 or more goals! 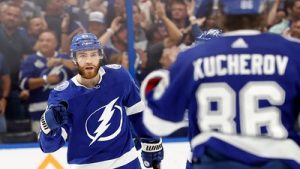 Tampa’s top line of Kucherov, Brayden Point and Ondrej Palat is lethal, especially this time of year. So far in these playoffs, Point leads the league in goals, and Kucherov is tops in total points. That kind of production coming from one line is frightening to any opponent.

On the other hand, the Canadiens’ top four defenseman—also known as the “Clydesdales”—have been stifling, and use physical play to slow down opposing forwards. Ben Chariot and Shea Weber picked up a goal and an assist, respectively, as the top defensemen were also the Habs’ only source of offense in Game 1.

Unfortunately the Clydes play heavy minutes and are bound to make a few mistakes throughout the series. And that’s all the Tampa top line needs. Give the edge to the Lightning here.

A considerable strength of both teams is their depth throughout all forward lines. Montreal has four lines, all serving a different purpose, and this constant change of pace can make it difficult for opponents to game-plan.

Tampa also has diverse lines that can hurt you in a number of ways. In Game 1, the Lightning received scoring contributions from the first line twice—both the second line offense and defense and the third line. I expect Montreal to bounce back, however, and have a slight edge on the forward lines for the rest of the series.

The Canadiens’ forward depth has been a key factor in getting them this far, so there is no reason to give up hope after one poor showing.

Kucherov logged 3 Points in the Lightning’s Game 1 win over the Canadiens! Bet on Kucherov to have 1+ Point and the Lightning to win at PointsBet.com. Max bet $100. 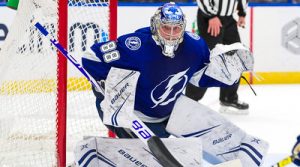 This particular matchup will easily be the most exciting and influential of the Stanley Cup Finals. The best players on their respective teams, these goalies haven’t allowed much of anything to get past them this postseason. They’re the main reason we have this current Stanley Cup Final matchup, and they should continue standing on their heads to block shots all series long.

Andrei Vasilevskiy is arguably the best goalie in the NHL, and has been the past couple seasons. Carey Price looked washed up this season, then exploded back onto the scene in the postseason, where he’s been electric. But the Habs’ goaltender reverted to his regular-season self again in Game 1, allowing five goals in a blowout loss. While I expect this to be the last such game of the series for Price, Vasilevskiy is better and more consistent overall. He has the definite edge here.

You can’t discount the importance of the guys pulling the strings in the Stanley Cup Finals. In-game adjustments and timely line changes can make or break a team’s chances of lifting the cup.

Tampa’s Jon Cooper has been there and done that. He has one Stanley Cup win in two tries since taking the head coaching job down south. Luke Richardson, on the other hand, is the third head coach for Montreal this year. Claude Julien was fired earlier in the year, and now replacement Dominique Ducharme is being held out due to a positive Covid test. While Montreal has performed well under Richardson so far, it’s hard to tell if they can maintain this success throughout an entire Stanley Cup Final series. I trust Cooper more, and therefore Tampa also has the edge in head coaching.

Get $5 for Every Goal at BetMGM.com. Bet $50 or more on any Stanley Cup Final game, and you’ll bag a $5 Free Bet every time a goal is scored in the game!

While the Canadiens have enjoyed a Cinderella run to the Stanley Cup Finals, in the end they’re overmatched. Tampa Bay not only has the stronger side on paper, but is also returning most of the defending champion team. This championship experience cannot be valued highly enough and should be enough for the Lightning to strike twice. Enjoy the series and good luck.

Betting the Stanley Cup? Get a Live 20% Profit Boost when you wager Monday, Wednesday or Friday at PlaySugarHouse.com.