HomeThe Shuffle2021 WSOP: What Are the Chances? 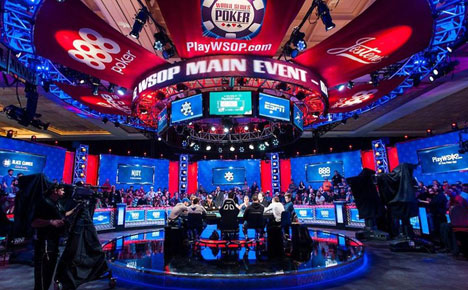 The World Series of Poker starts Thursday, and controversies are already brewing about the vaccine mandate and the stake-and-markup program.

The World Series of Poker starts Thursday, September 30. The WSOP, which attracts thousands of players from around the world, is usually held in the summer, but was rescheduled this year because of the Covid-19 pandemic.

Last year’s tournament was strictly online; this year, all 88 events will be held live at the Rio in Las Vegas, starting with the casino workers’ tournament on Thursday. The marquee tournament, the Main Event, begins November 4 and ends November 17. The whole shebang comes to a close on November 23.

Though some offshore and European-based sportsbooks offer odds on the facets of the WSOP, betting is usually not available in the United States. In 2019, Caesars posted odds on who would win the Main Event when the final table was determined, and might repeat that wager this year.

Though the tournament hasn’t begun, two controversies are already affecting the competition. The first is WSOP officials requiring participants and a limited number of spectators to be fully vaccinated. The second is star players offering stake packages, allowing people to back someone and get a cut of their winnings, but paying a fee to do so.

Both issues have been widely discussed in the poker world, and don’t look like they’ll be going to go away any time soon.

Because of the global pandemic, WSOP officials decided players, media and spectators must show proof of Covid-19 vaccinations. When the decision was announced August 26, it created a strong reaction on both sides of the debate.

“This is not a decision we have taken lightly—it is made with no agenda beyond protecting player eligibility and the operations of a unique televised gaming event,” said WSOP Executive Director Ty Stewart. “The nature of poker is to be in close proximity with your opponents for extended periods of time, and a seat at the World Series of Poker is a commitment for both our company and the participants.

“We want players to be excited for their return to the WSOP, while offering the greatest level of protection and limiting complications during the tournament this fall.”

Joe Cada, winner of the 2009 Main Event, criticized the vaccine mandate, tweeting, “How many poker tournaments were held this summer? Was there a huge drop-off in numbers from event to event? Was there a huge influx of unvaccinated players going to the hospital? Am I being naive, because things seemed normal for a change.”

Another Main Event champion, 2003 winner Chris Moneymaker, initially canceled his trip to Las Vegas over Covid concerns. When the WSOP announced the mandate, he tweeted, “Thank you,” and said he might attend.

Another topic that’s divided the poker community is markups when it comes to staking a player. The WSOP has several notable entrants that are offering people the opportunity to back them and get a share of any potential winnings.

With that investment comes a markup. If you want to back a player, you can expect to pay anywhere from 1.3 percent to 1.8 percent. So if you make a $1,000 investment and there’s a markup of 1.3 percent, you’d have to pony up and additional $300.

Opponents of the policy include poker player Andrew Barber, who has roundly criticized players charging such fees.

“This markup situation in poker tournaments is never gonna go away, is it?” Barber wrote on Twitter. “Big names are straight up robbing people once again, and it’s because the people buying simply don’t know enough about the process.”

But Phil Helmuth, the all-time WSOP winner with 15 bracelets, defended the practice, writing on Twitter that he’s made his backers more money than any vig they had to pay.

Learn to play poker like the pros. Read these how-to’s for Texas Hold’em, Omaha and Seven-Card Stud at WSOP.com.