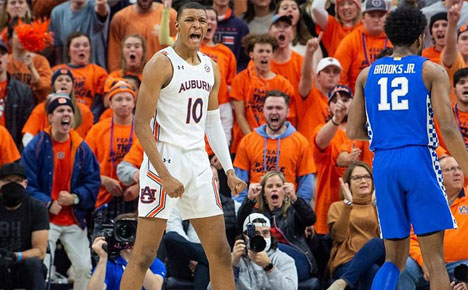 With college basketball heating up, it’s time to jump on some futures bets while odds are nice and juicy. These good teams have great odds.

With a little over a month left in the college basketball regular season, NCAA teams are starting to show their true colors. The field is wide open with no clear juggernauts, and that should make for an exciting tournament. As a result, even the top teams have surprisingly long odds to cut down the nets in early April.

At the current price, these teams are worth your investment:

As the top NCAA team in the country, the Auburn Tigers have all they need to win a championship: size, scoring, rebounding, passing, shooting and defense. It’s hard to find a weak spot on this team, which is why the Tigers are sitting at 19-1.

Led by forward Jabari Smith, who’s making a great case for the #1 draft pick in the upcoming NBA Draft, Auburn has a real chance to win out and enter the SEC tournament with only one early-season loss to the #22 UConn Huskies. This team makes a deep run in the tournament every year. Expect the same from the Tigers this postseason.

Betting the Tigers? Join Unibet Sportsbook today. Once you add funds, your first cash bet is insured up to $500 if you don’t hit a winner.

Coming off a statement blowout win against the #3 Arizona Wildcats, the UCLA Bruins are one of the NCAA’s best and most well-rounded teams. They’ve got size and can score in isolation or by moving the ball around. This team can rebound and pass at every position.

The one concern is solid-but-not-great defense, but the Bruins compensate with efficient and consistent offense. UCLA has as good a shot at this year’s national title as anyone. 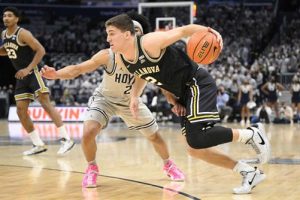 The Villanova Wildcats started the season as one of the best teams in the nation with one of the best players in guard: Collin Gillespie. Coach Jay Wright loaded up his team’s non-conference schedule to test them early, and that led to three losses against Top 6 teams early on. The Wildcats went on to lose the conference opener at the Creighton Bluejays, but have been on a roll since.

The ‘Cats have won eight of their last nine, including three teams ranked in the nation’s top 18. They’re an excellent rebounding and defensive team. and move the ball well. If they can lean on Gillespie for consistent scoring, this will be a very dangerous team in the NCAA tournament.

Root for the home team at PlaySugarHouse. Sign up to wager, and your first deposit will be matched, dollar for dollar, up to $250.

The Crimson Tide has struggled with inconsistency this season, but also showed flashes of greatness. The team sits at 13-7, with six of the losses coming at the hands of unranked opponents. That being said, ‘Bama has beaten four Top 15 teams in the country this year. This team’s ceiling in the tournament might come down to matchups, as they’re a small team but pass and shoot the ball well.

If they can limit their turnovers and catch fire shooting the ball at the right time, the Tide will be tough for anyone to beat.

Bet $50, Get $50 when you sign up to wager on college basketball at BetAmerica! Just create an account, make your $50 deposit, and play!

Quite the opposite of the Crimson Tide, the Florida State Seminoles are a large and athletic team. They have yet to unlock their full potential, as their scoring and defense isn’t quite where it should be. However, the Seminoles have shot the ball at a solid percentage from deep this season and, due to their size, can easily out-rebound teams. This is more based on their high ceiling than current results, although the team is coming off a big win against the #6 Duke Blue Devils and is sitting atop the ACC standings.

If the ‘Noles get hot at the right time, they’ll match up well against any opponent in the NCAA. There’s a real window for this team, and at +8000, they’re worth a shot.

Hoops fans, place at least $100 in real money wagers on NBA games at Caesars Sportsbook, and get a $150 NBA store gift card! Through February 7.

NCAAM: Down the Stretch

This list features top teams to underdogs that could be dangerous in March and make a deep run. All five are worth taking a shot at, because each could be the last team standing in April. Plus, all five are fun to watch and root for, which makes the betting better. Enjoy the stretch run of what should go down as a competitive 2021-22 college basketball regular season.

*All odds from Caesars Sportsbook

Check out these sportsbooks before you place your next bet. And stay tuned to iGamingPlayer for sports rundowns and game picks.