HomeThe Shuffle3 States to Watch for iGaming Legalization in 2017

3 States to Watch for iGaming Legalization in 2017 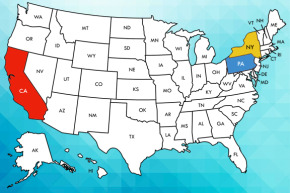 Each year, it seems more and more states are legalizing online gaming. In 2017, the three states to watch are also three of the biggest potential markets in the United States.

California has tried many times in the past few years to legalize online gaming, but has run into roadblocks by various groups each time. Last year, the state nearly overcame hurdles from the racing industry and issues related to the “bad actor” provisions, but at the last minute, the legislation—known as the “Gray Bill” for its sponsor Assemblyman Adam Gray—failed.

Not dissuaded, Assemblyman Reginald Jones-Sawyer introduced new legislation, the Internet Poker Consumer Protection Act (AB 1677), in February 2017. The bill would allow California Indian tribes that already operate casinos or cardrooms to offer online poker. At this time, the act is likely just a starting point to encourage the various lawmakers back to the table to re-open negotiations on the legalization of online poker. Hopefully, the momentum from 2016 will continue in California this year.

Like California, New York almost legalized online gaming in 2016, but could not quite cross the finish line. Already in 2017, there are identical bills in both the state Assembly and Senate that would legalize online poker. Both bills would define poker as a game of skill, create licenses for up to 11 operators, and place the minimum player age at 21. The Senate version of the bill already received unanimous approval from the Racing, Wagering and Gaming Committee. Additionally, Assemblyman J. Gary Pretlow—who previously expressed concern about bringing online gaming to New York—has indicated that he will support this legislation in 2017.

Pennsylvania lawmakers have introduced a wide-ranging gaming proposal, which encompasses online gambling. The House and Senate are looking to schedule a joint hearing on this proposal in early March. Pennsylvania is seen as a likely candidate for legalization due to the potential for revenue from gaming that would support the state budget. The state has struggled with budget deficits in recent years, and expanded gaming is seen as a potential part of the solution.

While these states move forward, much also depends on federal law as well. Newly confirmed Attorney General Jeff Sessions has announced that his office may revisit the Department of Justice’s 2011 opinion on the Wire Act. Further, whether this new administration will be an online gaming friend or foe still remains to be seen.

While the federal government is slow to address online gaming, the states are hearing the voices of their populations. Beyond California, New York and Pennsylvania, Michigan and Ohio also are considering online gambling legislation this year and may come online as well. As lawmakers and voters become more familiar with the value and benefits that online gaming offer, the chance of legalization grows.