The 311 is going strong on the Los Angeles Chargers, Cleveland Browns, and Miami Dolphins in Week 13 NFL action.

This is week 13 of the NFL 2022-2023 season. The 12th week of action had the favorites covering nine times and the dogs seven. The totals were seven Over and nine Under.

The Cleveland Browns go on the road to face the Houston Texans. The Browns are favored by seven and the money line is Browns -335. The Texans have lost six games in a row.

The Browns have a record is 4-7 and are anticipating the return of quarterback Deshaun Watson. This is Watson’s first game on the active roster this season.

While the Browns only have an outside chance to make the playoffs, this game is a must win for Cleveland to have any chance of making the post season. Watson will want to play well against his former team. Take the Browns moneyline over the Texans.

Chargers Bring Raiders Back to Reality

The Los Angeles Chargers travel to Sin City to face the Las Vegas Raiders. The Chargers are favored by two at most sportsbooks, but BetMGM has them at 1.5.

The Chargers are second in the AFC West at 6-5 and have won two of their last five. The Raiders have won two straight on the road. Vegas is 2-2 at home.

The Raiders have not been consistent this season. The Chargers are in the hunt for a wildcard position. Chargers must win to stay within striking distance. Take the Chargers minus the points.

Dolphins-49ers Clash of the Winning Streaks 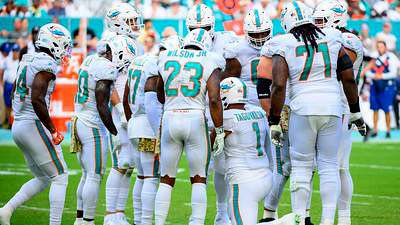 The Miami Dolphins are on the road to take on the San Francisco 49ers. The Niners are favored by four points.

The Dolphins have won five straight games. The Niners have won four straight. Both teams lead their respective divisions.

This Dolphins offense has scored more than 30 points in their last four games. The Niners will have to use a ball control style to limit possessions for Miami. Miami quarterback Tua Tagovailoa is in the conversation for MVP. A win over the Niners will enhance his resume.

Grab Miami plus the points as they upset the Niners on the road.

Bet Over in Seahawks-Rams Game

Buffalo Bills wide receiver Stefon Diggs as an anytime touchdown scorer against the New England Patriots. The price is set at +120 at Bet365.

New England’s defense was exploited by the Minnesota Vikings on Thanksgiving by a score of 33-26. Diggs has a touchdown in five of his last seven games. He is one touchdown shy of matching his career best of 10 TDs in a season.

Diggs has scored in his last two straight games. Take Diggs to score a touchdown in this game.