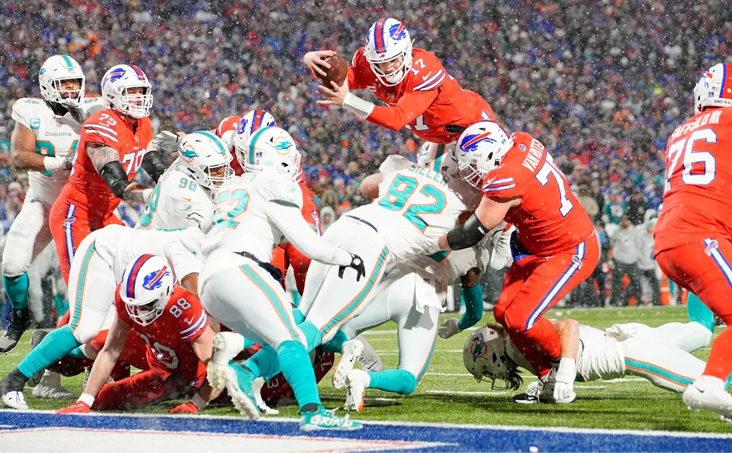 The 311 is ready for NFL Wild Card Weekend with predictions on the Buffalo Bills, Cincinnati Bengals, and San Francisco 49ers, as well as the total for the Minnesota Vikings-New York Giants game.

The 311 consists of three NFL games that I select using the spread or money line and two games that are selected based on the total number of points for both teams going Over or Under and two players to reach a projected outcome during the game. This will give you action every week based on trends and matchups.

This is Wildcard Week in the NFL. The teams with byes are the Philadelphia Eagles and the Kansas City Chiefs. The Eagles are projected to have a 34% chance of making the Super Bowl The San Francisco 49ers are the strongest competitor to the Eagles in the NFC.

The Kansas City Chiefs are the betting favorite to win Super Bowl LVII. The Buffalo Bills and the Cincinnati Bengals are the two teams that have the best chance in the AFC of preventing the Chiefs from going to their third Super Bowl in the last four years.

The Wild Card game in the AFC that’s the closest in the betting odds is the Jacksonville Jaguars and the Los Angeles Chargers. The line in their game opened at Chargers -1. In the NFC, the game with the closest betting line based on the early money is the Tampa Bay Buccaneers and the Dallas Cowboys. Cowboys opened at -2.5 and the game went to 3. The consensus of early money on this game has a 6% differential.

The Buffalo Bills host their AFC rival the Miami Dolphins and the Bills are favored by nine. The total is 46.5.

The Bills have won seven straight games. The Dolphins have lost five of their last six games. Three of those losses were to teams that are in the playoffs.

The teams split during the regular season in two close games that were decided by a total of 5 points. The Dolphins quarterback in both of those games was Tua Tagovailoa. He appears unlikely to be ready for the game on Sunday.

The Bills will have renewed motivation with the recovery of Damar Hamlin from his life-threatening injury against the Bengals. Josh Allen has thrown for more than 300 yards in both regular season games against Miami. Expect more of the same as Miami is going in the wrong direction and not at full strength.

Prediction: Bills -9 over Dolphins (-113 at BetRivers)

The San Francisco 49ers are hosting the Seattle Seahawks on Saturday and are favored by 10. The total is 43.0.

The betting line for the game opened at 6.5 and quickly moved to 10. The Seahawks are the surprise team of all the teams in the playoffs. This was deemed a rebuilding year after the trade of quarterback Russell Wilson.

The Seahawks benefited from a favorable schedule and the resurgence of quarterback Geno Smith. Look for the Niners to dominate this game and win by double digits. The game will go over.

The Bengals ended the season on an eight-game winning streak. The Ravens were 3-2 over their last five games. Ravens quarterback Lamar Jackson has not played since Week 13 when he injured his knee in a win over the Denver Broncos.

The Bengals defeated the Ravens 27-16 on Sunday. The Ravens have won six of the 10 previous meetings between these two division rivals. The division rivalry generally ensures a tightly contested matchup. That will be the case whether Jackson plays or not. But the Bengals have home field advantage and momentum going into this game. Take the Bengals money line of -350 over the Ravens.

Plenty of Points for Vikings, Giants

The Minnesota Vikings are hosting the New York Giants on Sunday. The Vikings are favored by three points and the total is 42.

The Vikings defeated the Giants 27-24 on December 24th. Minnesota has won three of their last five games. They gave up an average of 29 points during that span.

The Giants are averaging 24 points over their last 5 games. This game will replicate the first meeting and will be decided by who has the ball last. Five of the Vikings last six games have gone Over. Take this game Over 42.

The price at Bet365 for Jefferson and Diggs is -110. Diggs has scored four touchdowns in his 10-game playoff career. Jefferson scored eight receiving touchdowns and one rushing touchdown this season.

Both players will get six or more targets in their games. Take either of them as an anytime touchdown scorer.