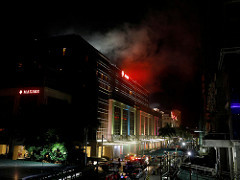 Casinos have thus far been lucky to avoid any serious terrorist related incidents in the world. When it appeared that luck may have just run out, it turned out to be a disgruntled gambler.

A lone gunman invaded the Resorts World Casino in Manila in the early hours of Friday morning armed with guns, explosives and gasoline. The end result was the death of 37 patrons, 70 injuries and the suicide of the attacker. Officials were initially baffled about his motive but quickly discounted a claim of responsibility from the terrorist group, ISIS.

When the identity of the attacker was revealed three days later, it all made sense. Jessie Carlos was the father of three, a former employee of the state Finance Department and was in debt $80,000 to the casino.

At first it was suspected that the attack was terrorism. The Philippines government has declared martial law in the southern Mindanao islands after years of Muslim insurgency. Government troops have been attacking a band of about 1,500 ISIS fighters in Marawi City on the troubled island for the past two weeks facing fierce resistance.

But police discounted this theory because of the activity of the gunman, who forced his way past security and emptied a liter of gasoline on gaming tables and the carpet, igniting it and stealing more than $2 million in chips. Most of the dead and injured were recovered from the gaming area affected by the smoke from the fire.

The gunman escaped the gaming floor and conducted a running gun battle with casino security and police. A Resorts World executive said that the attacker, a tall, English-speaking white man, was wounded and retreated to the 5th floor of the Maxim’s Hotel, attached to the casino where he covered himself with a blanket, doused himself in gas and ignited it.

While several ISIS chat boards based in Syria claimed responsibility for the attack, the police discounted those claims.

But the claim was fairly specific: “Brother Abu al-Kheir al-Arkhabili was able to immerse among a gathering of Christian fighters in the Resorts World Manila in Manila where he carried out killing and hurting until he died as a martyr. About 100 Christians were killed or wounded.”

“Either he lost in the casino and wanted to recoup his losses or he went totally nuts,” Metropolitan Manila Police Chief Oscar Albayalde told the Philippine Star.

National Police Chief Ronald dela Rosa said that stealing the chips and not shooting people was an indication that the attack was just a robbery gone bad.

Brigadier General Restituto Padilla rejected the claim, saying the attack “does not have the slightest signature of terrorism whatsoever.”

“As in previous incidents, this group is prone to claim and admit every criminal incident and label it as its own,” Padilla said.

An eyewitness and a regular player at Resorts World said that the attacker was a “regular customer” at the casino.

“We’re asking for your apology,” said his mother. “We can’t accept ourselves that my son became like this, he was a very kind son. He chose to end his life rather than kill people.”

“The message of what happened to my son is people should not get hooked on gambling so their families won’t get destroyed,” she said.

Official say Carlos sold off property to support his gambling habit. His parents said they asked casino officials on April 3 to ban him from entering.

He was fired from his job in 2014 for failing to reveal that he owned a house in Manila, an SUV and had other business interests—a requirement to hold a government position. He also forfeited any retirement pension.

Hundreds of people fled the casino during the attack and police evacuated the surrounding buildings after the attack but no further suspects, weapons or activity was discovered.

Resorts World COO Steve Reilly said armed security initially decided not to confront the gunman for fear of escalating the situation, only acting after the fire was started. He denied that there was a breakdown of security. Also questioned, however, was the casino fire suppression equipment, which will be investigated, according to Reilly.

Reilly also said Resorts World was giving the families of each of the victims 1 million pesos ($20,000).

“Yesterday we lost so many lives because of this senseless act. We hope that we will be able to somehow help,” he said.

Two days after the attack, Philippine President Rodrigo Duterte said the attacker was “simply crazy” because he stole the $2 million in chips without any chance of redeeming them. He also reiterated that that attack “is not the work of ISIS. The work of the ISIS is more cruel and brutal.”