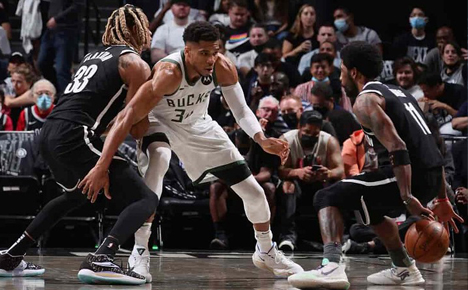 Are the Nets for real? Can the Lakers do a U-turn? Should you bet on the Suns? Almost halfway through the NBA season, we answer your burning questions

The NBA is nearing the midway point of the regular season, and while the Brooklyn Nets remain the favorite to win the NBA Championship, there are some surprises.

The Cleveland Cavaliers are the biggest shock so far this season. The team was +2000 to make the playoffs before the season. The Cavs are currently fifth in the Eastern Conference, and went from +50000 on October 19 to +10000 to win the NBA Title.

Another team turning heads: the Washington Wizards. They began the season with +400 odds to make the playoffs, but find themselves in sixth place in the Eastern Conference.

In the Western Conference, the Los Angeles Lakers were expected to battle for the top spot. But the Lakers, who went from +650 two months ago to win the title to +1100, can’t find any chemistry with its superstar players. In addition, they have the oldest lineup in the league, and injuries are a concern. The Lakers are seventh in the Western Conference.

Atop the standings are the Golden State Warriors. Steph Curry was expected to carry this team, but only to get a playoff spot, not lead the west. The Warriors were +1000 to win the title before the season, but are now the second pick at +550.

At BetMGM, you’re protected from narrow parlay misses. If your One Game NBA Parlay (of at least four legs) misses by only one leg, your stake is refunded (up to $25). Available once per day all season! 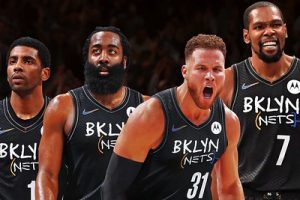 They’re the best team on paper, and one of the most talented organizations in the history of the league. In addition to the Big 3—Kevin Durant, Kyrie Irving, and James Harden—there’s talent galore in supporting players LaMarcus Aldridge, Blake Griffin, Patty Mills, and rookie Cameron Thomas.

But there are also question marks. The biggest one is Irving. New York City requires anyone entering an indoor arena to show proof of vaccination. Irving refuses to do so, and thus can’t play home games. He’s been cleared to play in road games, and the scary thing is the Nets might still be the best team with a part-time Irving.

Oddsmakers certainly believe so. BetMGM has the team as the +250 favorite, down from the season-opening odds of +260.

NBA Same Game Parlays are here for all NBA Games at PointsBet! Choose the NBA Game you want to bet on. Pick your legs, place your bet and watch the action all in one game!

If Not Brooklyn, Then Who? 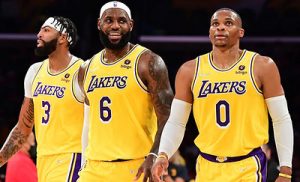 Right now, the Nets don’t have the best record in the NBA. That may not matter when the playoffs roll around in April, but at the moment, Brooklyn isn’t a lock to win the Larry O’Brien Trophy.

The first in line there would be the defending NBA Champions, the Milwaukee Bucks. It appears these two teams will meet in the Eastern Conference finals. BetMGM has the Nets at +130 to win the East, followed by the Bucks at +300.

The Bucks will need a huge effort from reigning MVP Giannis Antetokounmpo, but if he can deliver like he did last year, it could be the Bucks in the finals, not the Nets. (Check the latest 2021-22 MVP odds below.)

If the Nets make the finals, they might face the Golden State Warriors, +250 favorites to win the Western Conference. Curry and Draymond Green are leading this team, and if Klay Thompson returns from a year-long injury in previous form, the Warriors will be dangerous come playoff time.

Whether you’re betting the Bucks or the Warriors, you’re a winner when you sign up to wager at Golden Nugget Sportsbook. New players score up to $250 in Free Bets! Sign up and start today.

Will Los Angeles Lakers Turn It Around?

The Los Angeles Lakers had the second-best roster entering this season. Led by LeBron James and Anthony Davis, they added Russell Westbrook and Carmelo Anthony. They entered the season the second pick to win the title at +650.

Only problem was the age of the team. They had 12 players over the age of 30, and injuries were a concern. Ironically, it’s Davis, 28, who has suffered the most significant injury so far. He suffered a sprained knee and is out for at least a month.

The team has also had chemistry issues. All that talent is finding it difficult to mesh, and as a result the team is currently seventh in the Western Conference, two games below .500.

If healthy, the Lakers pose a serious threat to the Warriors and Phoenix Suns in the West, and could sneak into the finals. But that’s a very, very, big if.

Join Unibet Sportsbook and beat the odds. Once you add funds, your first cash bet will be insured up to $500 if you don’t hit a winner.

Are the Phoenix Suns Still a Good NBA Bet? 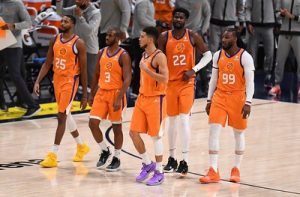 The defending Western Conference champions were the hottest team in basketball a month ago. They went on an 18-game winning streak that if a bettor had placed a $100 bet and rolled it over, would have had somewhere around $3.2 million at the end of the streak.

The Suns have cooled a bit since then, winning seven of their last 10 as of Monday, and are 5-5 against the spread.

The secret is out on the Suns, and even if they rattle off another streak like the one in the early part of the season, oddsmakers will adjust the lines.

Play it safe! Know the signs of problem gambling, and always quit while you’re ahead. Click here for more.