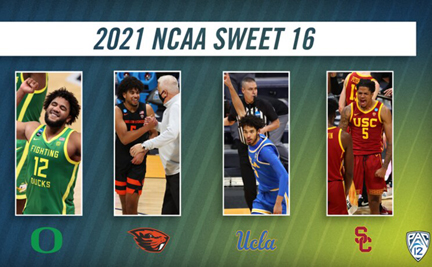 The first two rounds of the NCAA Tournament were filled with huge upsets. This week, John Reger expects the upsets to subside and the favorites to dominate.

The first two rounds of the NCAA Tournament were filled with huge upsets. This week, I’m betting the upsets will subside and the favorites will dominate.

I went with the favorites in every Sweet 16 game (for a complete schedule, click here). You usually expect upsets in the first two rounds, but games tend to trend toward favorites after the first weekend. Saturday and Sunday’s games to follow that pattern.

Betting against the Pac-12 seems like heresy, as that conference has been the most successful in the tournament thus far. Only the Oregon Ducks have been defeated, and the USC Trojans and UCLA Bruins have looked impressive in their two victories.

The Oregon State Beavers looked strong as well in the first two rounds, defeating higher seeds to reach the Sweet 16. First, they knocked off the Tennessee Volunteers 70-56, then took down the No. 4 Oklahoma State Cowboys, 80-70.

Unfortunately, they now face a team that’s equally hot, and probably should have been seeded higher. The Loyola Ramblers were ranked No. 8, and quickly showed they could’ve been put up higher. The Ramblers defeated the No. 9 Georgia Tech Yellow Jackets 71-60 in the first round, and then upset the No. 1 Illinois Fighting Illini 71-58, in a game that wasn’t even that close.

They’re laying 6.5 points at (affiliate link) BetMGM, and that line seems too low. The Ramblers have beaten their last two opponents by 10 or more points. Take Loyola and give away the points.

Check out March Matchups at BetMGM.com. Log in on NCAA game days to receive two 10% Parlay Boost Tokens. Win your boosted parlay wager, and you get 10% extra winnings in cash!

USC Looking Down on Oregon

One Pac-12 team I’m bullish about is the USC Trojans. The No. 6-seeded Trojans, led by the Mobley brothers, are mowing down opponents. They easily defeated the Drake Bulldogs in the first round, 72-56, and gave the No. 3 Kansas Jayhawks their third worst loss in program history, 85-51, in the second round.

Now USC faces another conference team in Oregon. The Ducks opened as a 1-point favorite, but the sharps quickly bet it down to 2.5 in USC’s favor. Based on the previous meeting between the two this season, the line is still a bargain.

USC hosted the Ducks on February 22 and won handily, 72-58. The Ducks have a size problem—the team doesn’t have anyone who can match up with 7-footer Evan Mobley. It was a problem in the last game, and should be again on Sunday.

Baylor Shows Why It’s No. 1 in NCAA

The Baylor Bears were the second pick to win the NCAA Tournament at 6/1, and have been flying a bit under the radar. Baylor crushed the Hartford Hawks in the first round, and the Wisconsin Badgers in the second. But that wasn’t so impressive, as neither team was expected to challenge the Bears. In the Sweet 16, however, the Bears will get more of a test with the Villanova Wildcats.

The biggest question for Villanova was whether they survive without star guard Collin Gillespie, who was lost with a knee injury before the tournament. They did, beating the Winthrop Eagles and North Texas Mean Green, but were those victories that impressive?

Baylor will present a much bigger problem for the Wildcats. The Bears are favored by 6.5 points, and laying those points shouldn’t be an issue. Villanova could fall behind early, and Baylor won’t let them get close.

The bonuses keep coming at BetRivers.com! Check in daily through the NCAA Championship for a new Mystery Madness sports betting offer, every day through April 5.

Big Spreads No Problem for Gonzaga

The Gonzaga Bulldogs were the top pick by oddsmakers to win the NCAA Tournament at +200. Those odds have since fallen to +165, and it’s easy to see why.

Not only has Gonzaga been downing opponents with ease, the Zags have been covering some huge spreads. They were 33-point favorites in the first round against the Norfolk State Spartans and won that game, 98-55. The second round was tighter, but they still covered the 15 points against the Oklahoma Sooners in the second round, 87-71.

Now they have to tackle the Creighton Bluejays, who are 13-point underdogs. The Bulldogs have the size advantage in big man Drew Timme. Creighton will have problems not only stopping him, but getting three-point shots off, since Gonzaga possesses a strong perimeter defense.

Expect Gonzaga to cruise to another victory, and cover easily in the process.

Your next bet is golden! Double down on your first settled bet at GoldenNuggetCasino.com and your stake will be matched with a Free Bet up to $250.

When this line was announced, the Michigan Wolverines were favored by six points over the Florida State Seminoles, then the sharps bet it down to three and at some places 2.5.

Partly, it’s because the Big Ten has been awful in this tournament. A lot of teams got bounced in games they were favored to win: Illinois, Purdue, Ohio State, Michigan State, Iowa. That led to whispers that the conference was overrated. That may be true. But the Wolverines are the real deal, and should be able to handle Florida State. The Seminoles are prone to turnovers, so look for the Wolverines to take advantage of that.

Even without star guard Isaiah Livers, who is out with a stress injury to his foot, the team has played solidly. There’s a rumor that Livers might be available for the game, but even if he can’t play, the team should prevail against FSU.

No one knows sports like John Reger. Get Reger’s 5 Bets every week, right here at iGamingPlayer!