Just as we’re moving into a sports semi-drought, along come the Olympic Games to pick up the pace, with some golden betting options. 5 Bets also serves up good bets on UFC and golf.

This time of the year is usually considered a slow period for sports betting. The NHL is over, the NBA is over, and the NFL and college football are still a month away.

Fortunately, the Olympics begin on Saturday. Two bets on the 2020 Tokyo Games jumped out at me and I feel good recommending them. I also look at a PGA Tour event and a PGA Tour Champions major championship.

To round it out, I’ve selected the main event on Saturday’s UFC Vegas 32 card that might be a surprise. 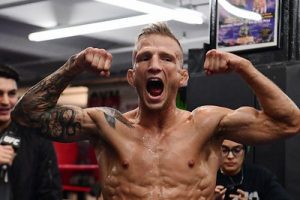 T.J. Dillashaw was at one time one of the best MMA bantamweights in the sport, but has had a rough two-year stretch. He tries to redeem himself on Saturday at UFC Vegas 32 against Cory Sandhagen.

This fight was scheduled for May, but Sandhagen suffered a cut during training and it was postponed until Saturday. Dillashaw comes into this fight as a +155 underdog at BetRivers. Sandhagen is listed at -190.

There’s good reason to be cautious about Dillashaw. He’s coming off a two-year suspension for EPO use. It came after a defeat by Henry Cejudo, who knocked out the then 33-year-old in January 2019.

There was also an issue with Dillashaw’s health. Both his shoulders were operated on, but that might have been a good thing. He returns to the ring completely healthy.

If Dillashaw has no rust from the long layoff, he could give Sandhagen all he can handle. The key to this contest might be Dillashaw wrestling with Sandhagen, who has shown weakness in that area.

I believe Dillashaw will pull off the upset, and at +155, I like the value in this bet.

Get a Parlay Profit Boost when you wager at PlaySugarHouse.com. Log in every Wednesday and Saturday get a 20% Boost for any 3+ Leg Parlay!

Els to Thrive at Senior Open 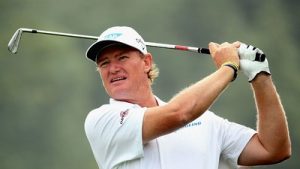 When golfers reach the age of 50, there’s a belief they can still play on the PGA Tour. But often, their game is better suited for the PGA Tour Champions.

That seems to be the case with the 51-year-old Ernie Els. His best finish on the PGA Tour in three years was a tie for 20th at the 2019 Honda Classic. Conversely, he has two victories in as many years on the PGA Tour Champions. He told reporters two weeks ago that he feels more comfortable on the senior circuit.

“For me, it’s a blessing to play in tournaments that I’m really committed to mentally,” Els said. “A lot of times in the last four or five years on the regular Tour, I just didn’t have quite the energy to really pick myself up in some of those events, and now I feel that there’s a different energy with me. I feel I can compete.”

That should be the case this week at the Senior Open Championship. Els is listed at +1000, behind favorite Jim Furyk, who’s at +350 at BetMGM.

Els has usually performed well at Open Championships, and I believe he will do the same this week.

Bet sports this summer for up to $1,000 in Free Bets at WilliamHill.com! Place Straight, Parlay and Teaser Wagers and Earn Points Towards a Free Bet. Must enroll by Saturday, July 31. 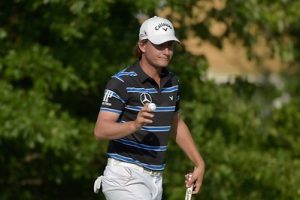 Golfer Emiliano Grillo wasn’t expected to do anything at last week’s Open Championship. He had missed three consecutive cuts, but managed a strong tournament and finished tied for 12th.

Now the 28-year-old enters this week’s 3M Open and is +3300 at PointsBet to win. Considering his performance last week, as well as him finishing tied for third at this event last year, this makes him an attractive pick with some great odds.

One stat that jumps out that will also be an advantage this week; Grillo is fifth on the PGA Tour in greens in regulation. 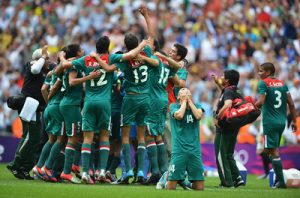 Men’s Olympic soccer is literally a crapshoot. It’s reserved for under 24-year-olds and there’s no track record for any of the teams competing.

Countries don’t have the same commitment to this event as they do for the World Cup or the Euro or Copa tournaments.

It makes picking a winner far more difficult, but the upside is, there’s a chance for a longshot to take the gold medal.

I like the value bet of Mexico at +4000 at William Hill. The team has a daunting task just to get out of group play, as they will have to contend with France and Japan. If they survive, however, I like their chances to pull off a shocker and win the gold.

Get ready to turn big plays into pay days at BetMGM.com! New customers start with a risk-free bet, up to $600.

Chupkov’s Experience Will Prevail in 200 Breaststroke 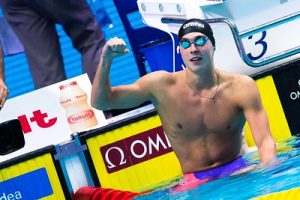 It’s puzzling why sportsbooks have Russian swimmer Anton Chupkov behind Australian Zac Stubblety-Cook in the 200 breaststroke. Coming into the Olympics, Chupkov had built an impressive resume, including winning the 2017 and 2019 World Championships, as well as the 2018 European Championships.

Stubblety-Cook, who hasn’t won any major events, is the +185 favorite to win the event, while Chupkov is at +200. I’ll take the Russian to continue his dominance.

Double down on your first bet at GoldenNuggetCasino.com. Just place your bet on any market (minimum odds -200) and the Nugget will match it with a Free Bet up to $250.