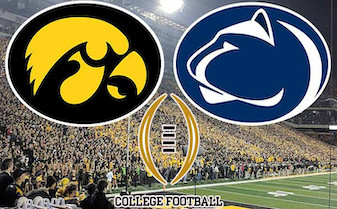 This week’s 5 Bets are all about college football, with four favorites and a dog. Let’s lock down some winners.

The Kentucky Wildcats are enjoying one of their best seasons since 2018, when they finished 10-3. They’re undefeated through five games, and last week knocked off the Florida Gators.

Saturday, they face a reeling Louisiana State Tigers team. Two years removed from winning the National Championship, the Tigers are 3-2, and the calls for head coach Ed Orgeron’s job are getting louder.

That outcry might hit a fever pitch after this contest. The No. 16 Wildcats are at home for the second straight week, and head coach Mark Stoops credits the fans for giving his team an advantage. But LSU is a wounded team, and may play with a sense of desperation. They’re already out of National Championship discussion, but a marquee bowl game invitation is still a possibility if they win.

The key for the Tigers will be their passing game, which was poor against the Auburn Tigers last week. Even that might not be enough. With Kentucky only laying three points at PointsBet, I’ll take the Wildcats to keep rolling.

Last year, when the Texas Longhorns faced the Oklahoma Sooners in the Red River Rivalry, the No. 22-ranked Longhorns were favored, but fell in four overtimes to OK.

This year, Texas finds itself the underdog going into Saturday’s contest. The No. 3 Sooners are giving away three points to the No. 21 Longhorns at BetRivers. Texas could get its first victory against Oklahoma since 2018.

Since losing to the Arkansas Razorbacks, Texas steamrolled the Rice Owls and Texas Tech Red Raiders, and defeated the TCU Horned Frogs, 32-27.

The victories for Texas have been convincing, but Oklahoma looks shaky, though undefeated. The Sooners beat the Nebraska Cornhuskers by seven, the West Virginia Mountaineers by three and the Kansas State Wildcats by six. They didn’t cover in any of those games.

Oklahoma’s offense hasn’t been stellar, and their defense is completely suspect. This is the Sooners’ first real test, and I believe they’ll fail it.

Bet at least $50 on Penn State vs. Iowa at Unibet Sportsbook and get $6 in free bets for every TD your team scores (PA/IA only).

The game of the week is definitely the No. 3 Iowa Hawkeyes at home against the No. 4 Penn State Nittany Lions. The Hawkeyes are favored by 2.5 points at Circa against a Penn State squad that’s already racked up impressive wins over the Wisconsin Badgers and Auburn en route to a 5-0 record.

Iowa also has two strong victories, both on the road. They manhandled in-state rival Iowa State Cyclones, 27-17, and blew out the Maryland Terrapins last week, 51-14. The Hawkeyes have done it with defense. They’ve had games with three, four and seven turnovers. But getting that many from Penn State should be a challenge. They have three turnovers in five games.

Still, if Iowa can get its passing game going, the defense should keep them in what will be a tough, physical game. It could come down to the last possession, but I’ll take the home team Hawkeyes to pull out the win.

#4. UConn Huskies Best of the Worst

If Penn State-Iowa is the best game of the week, the UConn Huskies at UMass Minutemen could be the clunker. Both teams are winless, and if they didn’t face each other, could go without a victory the entire season.

But someone has to win the upcoming game, and I think it’ll be UConn. The Huskies are favored by three points at Caesars Sportsbook after opening as a one-point favorite. The sharps realized UConn is the better of these two awful teams, and bet it down to quickly shift the odds.

While both teams haven’t won, the margin of defeat for UMass has been cavernous. The Minutemen have been outscored in five games, 136-71. The Huskies almost got a victory last week, losing by two to the Vanderbilt Commodores. They also lost by two the prior week, to the Wyoming Cowboys. Taking UConn and laying the points is an easy decision.

The USC Trojans are a puzzling team. They looked awful against the Stanford Cardinal and Oregon State Beavers at home, but impressive against the Washington State Cougars and Colorado Buffaloes on the road.

On Saturday, they host the Utah Utes as three-point favorites at BetMGM. Can they snap the two-game home losing streak? Definitely. The Utes have problems of their own. They lost to the BYU Cougars for the first time since 2009, then followed that up with an upset loss to San Diego State Aztecs, where they were favored by 8.5.

USC and Utah have a common opponent. Utah won unconvincingly at home against Washington State, while USC crushed the Cougars 45-14 on the road. That’s good enough for me. I’ll take the Trojans.

Click here for the NCAAF schedule, complete with games, times and broadcast information.

From Lightning to Kr