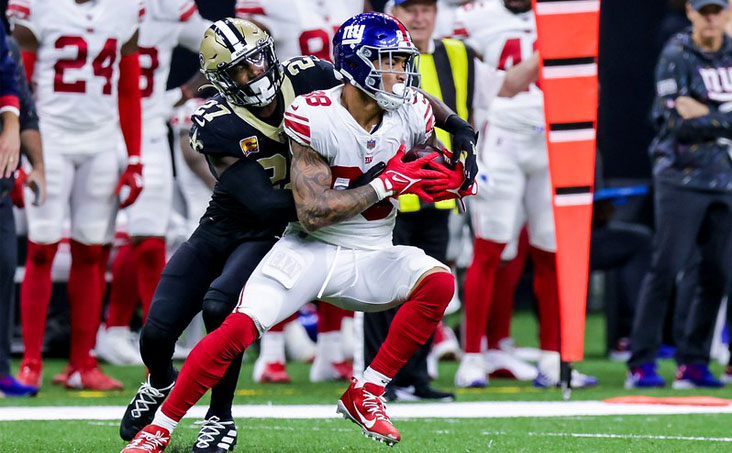 This week’s 5 Bets calls Giants over Raiders, NCAAF’s Cincinnati over Tulsa, and a pedigree in the Breeders’ Cup Juvie. Ready to wager? Let’s go.

I’m a big believer in the human element in sports motivation, and will lean on that strategy with this week’s 5 Bets. That means an NFL team distracted by a star’s deadly crash will lose on the road this Sunday, though it’s favored to win.

A top-ranked college football team has reason to score big points this Saturday at home. I don’t like the point spread, but like the over in this game.

I’ve taken the over in NHL games the last two weeks, and pushed both times. This Thursday, I’m looking at two teams that are more apt to go under the goal total.

College basketball begins Tuesday, and I’ll take a futures bet on a team to repeat as their conference champion.

My final bet is on the Breeders’ Cup. This horse is a longshot, but for a couple of reasons, I like him to pull off the upset. 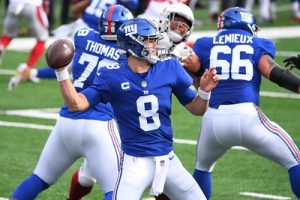 The New York Giants are not a good football team. They’re 2-6 and lost to the Kansas City Chiefs on Monday night, 20-17.

But Sunday’s home game against the Las Vegas Raiders presents a golden opportunity for the G-men, who could take advantage of a distracted Raiders squad. Las Vegas is dealing with the uproar around star player Henry Ruggs III, who was involved in a DUI-related crash Tuesday that has him facing felony charges. The Raiders released Ruggs in the aftermath of the crash, which killed a motorist in another car and injured Ruggs and his passenger.

Meanwhile, the Giants are a three-point underdog at BetMGM.

Can Las Vegas look past the tragedy? It might be too much to ask for a team that also saw Head Coach Jon Gruden resign less than a month ago. Home-field advantage for the Giants is worth three points, so look for them to not only cover, but to win outright.

Are you backing the Giants to win? Get NFL One-Game Parlay Insurance at BetMGM. Place a one-game, four-leg parlay on the game. Miss one leg, and you’ll get back up to $25. 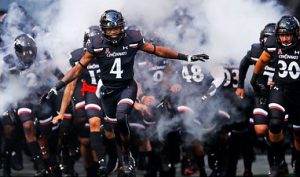 The No. 2 Cincinnati Bearcats were thought to have to roll over opponents in order to keep their ranking. But Cincinnati’s failed to cover two big spreads in as many weeks.

This Saturday, they’re again laying more than 20 points against a team that, on paper, they should crush. Of course, the Bearcats were expected to steamroll the Navy Midshipmen and Tulane Green Wave, but didn’t come close to covering in either game.

The team had been 6-0 ATS, but now, having lost their last two ATS, I’m going to shy away from backing them. However, I do like the over in this week’s game against the Tulsa Golden Hurricane, which is 54.5 at BetRivers. The Bearcats have hit the over in five of the last seven AAC games. Tulsa has cashed the over in six of its last seven games.

Tulsa’s offense won’t be able to keep up with high-powered Cincinnati, but they’ll score. The Bearcats can score 54 points by themselves, and did so in two previous victories. They’ll be fired up playing at home for the first time in three games, and will want to please their fans. An over should be easily attainable. Put it on your list of 5 Bets.

Get a 20% Parlay Profit Boost on NCAA football when you wager at BetRivers! Log in each Saturday for the big boost!

The Dallas Stars and Calgary Flames both know how to go low in a hockey game. The Stars had their eight-game under streak snapped on Tuesday, while Calgary has gone low in its last three games.

The two face each other Thursday night in Dallas, and I expect this game to follow the low-scoring trend. The over/under is set at 5.5 goals at Caesars Sportsbook, and I like the under to cash.

Whether you reach for the Stars or go down in Flames, you’ll get a Free Bet Match of up to $1,001 when you sign up to wager at Caesars Sportsbook—win or lose! 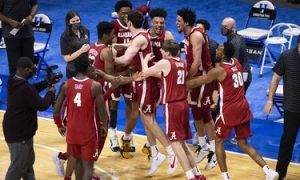 For several years, the Kentucky Wildcats have ruled men’s basketball in the SEC, but last year finished with one of its worst records in program history at 9-16. Coach John Calipari wanted to fill his roster with experience, and took advantage of players in the transfer portal.

The Wildcats are a much improved team, but with all the new faces, it might have a chemistry problem. They’ll still play better than last year and make the NCAA Tournament, but might be vulnerable in the SEC.

They’re still the +300 favorite to win the SEC at PointsBet, but the Alabama Crimson Tide might be able to pull off the upset. Alabama is +325 to win the conference but will also see new faces on the team as they try and defend their SEC title. The team has two players that are taller than 6’11” and that should provide some serious match-up problems for their opponents.

They do return guards Jahvon Quinerly and Jaden Shackelford, and the two will be counted on to lead this team. If they do, it could be another successful year for the Crimson Tide. Add this team to your 5 Bets.

Roll with the Tide when you sign up to wager at PointsBet.com. You’ll be eligible for a risk-free bet worth up to $2,000 if your first bet is a loss. 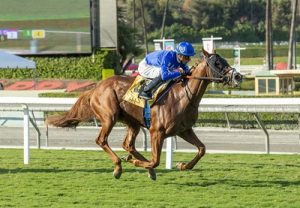 There are three reasons 5 Bets is going with Mackinnon to win the Breeders’ Cup Juvenile Turf on Friday. First, the two-year-old opened at 6-1, but has since moved to 8/1. Second, familiarity—the Doug O’Neill-trained horse has won two of his last three races at Del Mar Racetrack, site of this year’s Breeders’ Cup. Finally, bloodline. Mackinnon is the son of 2015 Triple Crown winner American Pharoah.

Modern Games is the favorite at 5-2, but I like the value I’m getting with Mackinnon, and will back him in this race.

Give Thanks for Grea