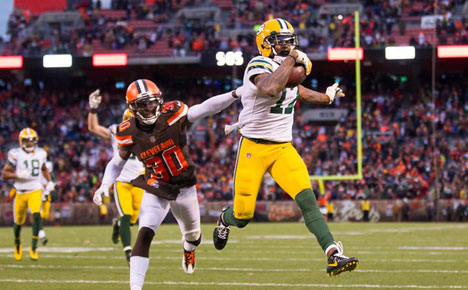 One of the great things about the holidays is the abundance of sporting events, especially on Christmas Day. Saturday has five NBA games, two NFL games and a college bowl. There are plenty of other contests wrapped around Christmas Day.

In this edition of 5 Bets, I look at two NFL games, one NBA game, and two college bowl contests. All but one is on Christmas Day. Prepare to unwrap presents with one eye on the TV.

In NFL action, the Green Bay Packers will host the Cleveland Browns, and the Indianapolis Colts will travel to Arizona to play the Cardinals.

The one contest not on Christmas is Thursday’s Gasparilla Bowl, featuring the University of Central Florida Knights facing the Florida Gators. On Christmas, the Ball State Cardinals will face the Georgia State Panthers in the Camellia Bowl.

Finally, the NBA’s New York Knicks are hosting the Atlanta Hawks and kick off the five professional basketball games being played on Christmas. 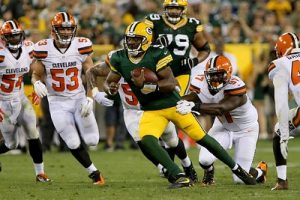 No team has been hit harder by Covid-19 than the Cleveland Browns. They lost quarterback Baker Mayfield, backup QB Case Keenum, running back Nick Chubb, eight members of the offensive line, and 16 members of the defense, including Myles Garrett.

Their game against the Las Vegas Raiders was moved to Monday, and they still nearly pulled off the victory, ultimately losing, 16-14. They won’t be so fortunate against the Green Bay Packers this Saturday.

The Browns come into the game with no idea who will be available to play. Some of those on the Covid list should return, but as of Monday, no one was sure.

The line opened at seven points in favor of the Packers and notched up to 7.5. For the Browns, playing on a short week at Lambeau Field with no idea who will suit up looks like the recipe for a blowout. I’ll take the Packers and give away the points.

Hey, Packers fans, new customers at BetMGM start with a risk-free bet, up to $1,000. If your first bet loses, you get back the same amount in free bets. 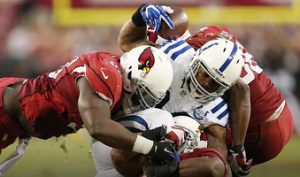 The Indianapolis Colts and the Arizona Cardinals are two football teams going in different directions. The Colts have won five of their last six games, including the two most recent. The Cardinals have lost three of their last five, including last week’s embarrassing 30-12 defeat to the lowly Detroit Lions.

Arizona is at home for Saturday’s game against the Colts, but it might not matter. Oddsmakers have the Cardinals just a 1.5-point pick over Indianapolis.

The Colts seem to be doing everything right. Their defense is 11th in the league in total points allowed, and limited the New England Patriots to 17 last week. On offense, running back Jonathan Taylor has been a rock. He’s averaging 122.5 yards a game and when he rushes for more than 100 yards, the team is 8-0.

Arizona’s rushing defense is 17th in the league. If they can’t stop Taylor—and I don’t think they can—it’ll be a long day for the Cards. I’ll gladly take the underdog in this game to win outright.

New customers get up to $500 in free bets if their first fixed-odds bet loses at PointsBet. Get started today! 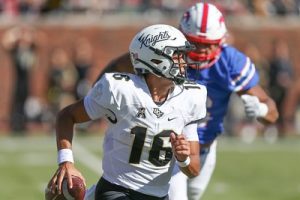 The University of Central Florida Knights have an inferiority complex when it comes to their place in the pecking order of teams in the Sunshine State. Despite recent successes, they’re still viewed as the red-headed stepchild of the Florida Gators.

In the Gasparilla Bowl, the Knights have a chance to upset the Gators, who are favored by 6.5 points, and get some respect. It might not be that hard. The Gators will have an interim head coach for the bowl game, and he might be the most motivated Gator on the sideline. The team lost three key players, and it’s not certain how the rest of the team feels about this game.

UCF, on the other hand, is plenty motivated. Look for them to definitely cover the 6.5 points they’re getting, and maybe even win outright.

At Resorts Casino, you’re eligible to score every month. Resorts refunds a percentage of cash back on monthly sports betting misses, up to $10,000.

The Georgia State Panthers and the Ball State Cardinals will battle in the trenches for victory in the Camellia Bowl.

Georgia State does it with a running attack that was eighth in the nation. Ball State, which is getting 4.5 points, will need a balanced offense if they expect to prevail. 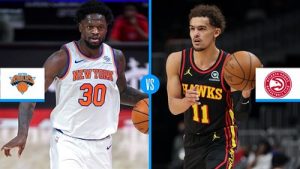 When the New York Knicks played the Atlanta Hawks on the road in late November, they won by nine points. Now they’re a 1.5-point favorite on the first of five NBA Christmas games.

A lot has changed since the teams met a month ago. The Knicks roster has been affected by Covid-19, with six players out and no return set. Also, Coach Tom Thibodeau and starting point guard Kemba Walker are feuding.

Will that be enough for Atlanta to sneak a win at Madison Square Garden? I doubt it. Look for New York to win.