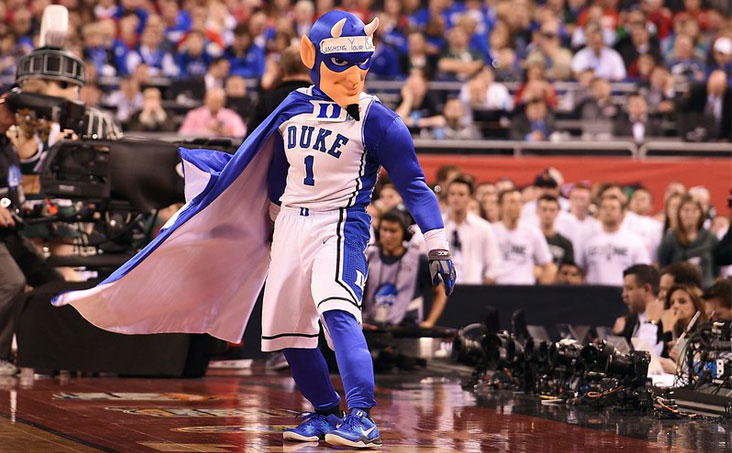 Our 5 Bets writer hits the NCAA Tournament hard after a successful run in the first round.

March Madness has been a little more subdued than I expected, though the first two rounds of the NCAA Tournament provided some heart-pounding moments. I had two out of four wins, with one loss decided on a meaningless basket with four seconds left.

Now that the field is set for the Sweet Sixteen, there shouldn’t be as many surprises—at least I hope not. I’ve picked four more games, with two of my picks on the moneyline. In the third game, I’m taking the favorite in a tight contest.

I only took one game with the underdog against the point spread. In that game, I’m getting nearly 10 points against a team that hasn’t beat the spread in its two previous tournament games.

My last pick is on Sunday’s NASCAR race at Texas Motor Speedway. I’m going with a driver who won at this track last year, hoping for a repeat performance. 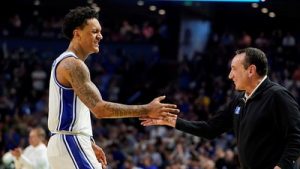 The Duke Blue Devils had little trouble getting to the Sweet Sixteen, beating the Cal State Fullerton Titans by 17 in the first round, and the Michigan State Spartans by nine in the second round.

That will change Thursday when they take on the Texas Tech Red Raiders. The Blue Devils are 1.5-point underdogs at Caesars Sportsbook, and if you think they’ll win, you should take the moneyline. If Duke covers, your $100 bet returns $90 if you take the spread. The moneyline is offering +100. An extra $10 doesn’t seem like a lot, but why leave that on the table if you think the Blue Devils will prevail?

This is Duke Head Coach Mike Krzyzewski’s final season, and his players are definitely motivated to go as deep as possible. I think they’re making it to the Elite 8.

Register a new Caesars Sportsbook online account. If you lose the first real money bet you place, Caesars will give you a Free Bet up to $1,100! 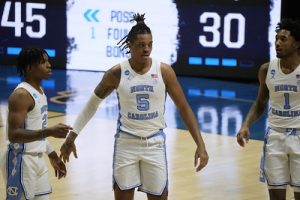 The same thinking applies in the North Carolina Tar Heels–UCLA Bruins game. UNC is a 2.5-point underdog, and would pay -110 if the team covered.

But take the moneyline, and it would pay out +115. For a game as close as this one should be, I like putting my money on the Tar Heels to win outright. Plus, we don’t know how effective UCLA forward Jaime Jaquez Jr. will be after leaving the St. Mary’s game in the second half with a sprained ankle.

Another advantage for UNC has been its play through two games of the tournament. The team is definitely peaking at the right time. The Bruins defeated Marquette, 95-63, then upset No. 1 Baylor in the second round, 93-86. The Bruins made it to the Final Four last year, but the Tar Heels end their tournament on Friday.

Join Unibet Sportsbook to bet on March Madness. Once you add funds, your first cash bet is insured up to $500 if you don’t hit a winner. 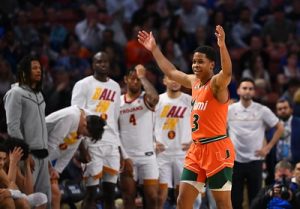 The Cyclones, 1.5-point underdogs at PointsBet, have pulled off two impressive upsets to get to the Sweet Sixteen, knocking off LSU and Wisconsin. But Iowa’s defense will be tested against a Miami team that plays small and fast. If this turns into a track meet, the Cyclones won’t be able to keep up.

The Hurricanes scored 68 and 79 points in their first two games, while Iowa State had 59 and 54. The Cyclones’ defense is good, but the team will fail its test and Miami will move on.

Hurricanes or Cyclones? Sign up to bet your favorite at PointsBet. You’ll get up to a $500 refund (free bets) if your first fixed-odds bet loses. Get started today! 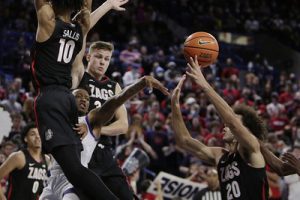 The Gonzaga Bulldogs have been the favorites to win the NCAA Tournament for most of the college basketball season, and they’re a No. 1 seed. The only problem? They made their first two games way more interesting than they should have been.

The Zags were up by just two points at halftime in the first round to the Georgia State Panthers, a team they were favored to beat by 22.5 points. They ended up pulling away in the second half, but couldn’t cover.

Against the Memphis Tigers in the second round, they were trailing in the second half, but managed to pull out an 82-78 victory. They failed to cover the 9.5-point spread, though.

Now they face a much tougher Arkansas Razorbacks squad. Gonzaga is laying 9.5 points at BetMGM, and while they may win the game, they won’t cover.

Can’t get enough basketball? Bet $50 on the NBA at BetMGM, and you’ll get a $10 Free Bet for March Matchups’ Round of 16, regardless of your wager’s outcome.

Shifting Gears with Larson Back on Winning Track

It has been a rough couple of races for defending NASCAR Cup Series champion Kyle Larson. In Phoenix, Larson had a mechanical issue and failed to finish. Last week in Atlanta, he tangled with Denny Hamlin and was knocked out of the race. Larson didn’t blame Hamlin for the wreck.

“I hate that it happened, but it’s a product of this racing and product of pushing; trying to draft and get your lane going,” Larson told reporters. “Nothing is intentional.”

Now Larson returns to what he hopes is a friendly race track at Texas Motor Speedway. He won at the track last year, but isn’t the favorite on Sunday. That’s Chase Elliott at +250, while Larson is next at +300.

I believe Larson breaks out of his mini slump and gets his second victory at Texas Motor Speedway.