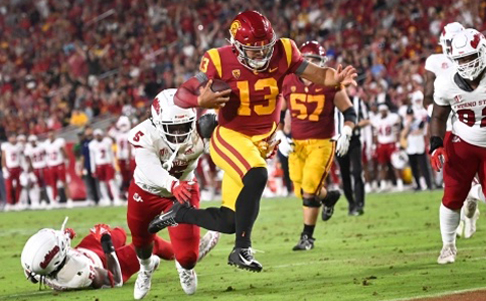 The 5 Bets to make this week is back after a week off and ready to make up for the lost bets.

The college and professional football seasons are slowly coming into focus but there are two teams that I have been impressed with so far. There is also a first half total bet I like on a team that dominates the first half of games against lesser opponents.

The round of 12 for the NASCAR Cup Series is set and one driver who is having an off year I like to win at a racetrack he is familiar with and had success at.

Finally, the Presidents Cup is this weekend and there is one golfer who is making his debut that I like to be the top rookie.

The USC Trojans certainly look legit and the proof was last Saturday against the Fresno State Bulldogs. This was exactly the type of game previous USC teams would have lost, or at the very least made it an unnecessary nail biter.

That wasn’t the case. New coach Lincoln Riley had that team focused and there was never a doubt as they thrashed the Bulldogs, 45-17. Couple that with their previous wins over the Rice Owls 66-14 and Stanford Cardinal 41-18 and the Trojans look ready to steamroll the Pac-12.

The Beavers will be a test for the Trojans but I like the number of 6.5. I think USC wins by two touchdowns.

The Alabama Crimson Tide towers over lesser opponents, especially in the first half of games. Consider Alabama has played two patsies so far and easily cleared the first half spread.

This is not an anomaly but a trend. In the last 12 games the Crimson Tide were favored by 35 or more points in a game, they are 10-2 against the spread for the first half. They have outscored opponents 445-44.

Alabama is facing SEC doormat the Vanderbilt Commodores on Saturday and are favored by 25 in the first half. I will gladly lay the points for the first half. They are 2-0 this year in first half ATS and I expect them to make it three.

Everything about the Buffalo Bills facing the Miami Dolphins screams trap game. The line is at 5.5 for the Bills but at first glance it appears it should be much higher.

Buffalo has trampled the defending champion Los Angeles Rams, 31-10 and the Tennessee Titans, 41-7. Their +55 point differential is the best in the NFL by a lot.

So why aren’t they double-digit favorites against the Dolphins? And why hasn’t money come flooding in on the Bills?

First, the Bills are on a short week. They played on Monday, then have a couple of days to prepare for Miami before getting on a plane and flying to South Florida.

Second, Buffalo might be missing defensive tackle Ed Oliver for the second straight game with an ankle injury. But the defense did just fine against Titans running back Derrick Henry, limiting him to 25 yards on 13 carries.

Get over what many are seeing as red flags. Buffalo will cruise on Sunday and win by at least a touchdown.

Watch Buffalo Bills vs. Miami Dolphins at 1 p.m. ET on CBS and Fubo. 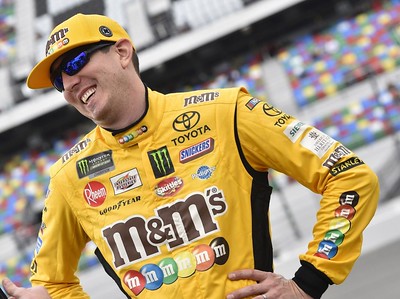 Kyle Busch has not had a great NASCAR season by his standards. He won once and hasn’t had a top-10 since August 14 in Richmond.

That doesn’t mean he should be overlooked this Sunday at the AutoTrader EchoPark 500 at Texas Motor Speedway.

It does worry me that he has had engine troubles in two of his last three races. I am hoping his crew has fixed the issue and he’ll be able to thrive at a racetrack he has had previous success at.

Max Homa dreamed of playing on the Presidents Cup. It was his first team competition since being on the 2013 Walker Cup team.

Still, when he got the phone call from Captain Davis Love III, it took a moment to sink in.

Homa is among a group of players who are making the debut at the Presidents Cup but he has the most upside. At +400 to be the top rookie, Homa could outpoint favorites Scottie Scheffler and Collin Morikawa.

Homa warmed up for the competition by winning last week’s PGA Tour event, the Fortinet Championship.

I think Homa will rise above the other rookies and come out as the top newcomer.

Watch the Presidents Cup Thursday through Sunday on Golf Channel, NBC and Fubo.