World Cup, Army-Navy, NFL, Golf, we have it all this week at 5 Bets. So let’s dive into a hodge-podge of betting opportunities on tap this week.

Catching our breath this week at 5 Bets after a crazy Saturday of college football conference championships. There is only one game of note this Saturday and we weigh in on who we think will win.

The World Cup is down to the quarterfinals and one of the best matches of the tournament will be on Saturday against a couple of nations rich in World Cup history.

There are two golf exhibitions starting Friday and we take a look at both of them.

Lastly, we can’t forget the NFL. It’s Week 14 and we have our eye on one of the divisional matchups.

France Gets Past England

One of the best quarterfinal games is going to be Saturday when England and defending World Cup champions France meet.

Both cruised in their round of 16 games. England got a clean sheet against Senegal, defeating them, 3-0. France got two goals from Kylian Mbappe and defeated Poland, 3-1.

France is the favorite at +137 and have an abundance of experience, including the championship run in 2018.

They will have to contend with one of the best defenses in the tournament and England does have Harry Kane but France should be able to slip a goal or two past England and move on to the semifinals.

The Army Black Knights host the Navy Midshipmen in the 123rd edition of this iconic game. Saturday’s contest should be a classic battle that will hinge on one aspect, the running game.

Army is second in the country in rushing offense, averaging 304.4 yards per game. Navy is fourth in run defense, allowing an average of 85.6 yards per game.

If Navy can stop the run, which I think they will, Army’s passing game is bad and they won’t have a backup plan.

The line on this game went from Army -6.5 to Navy -1. Take the Midshipmen to win another low-scoring game.

Max Homa and Kevin Kisner teamed up last year at the QBE Shootout and finished fifth. With that experience, the two should challenge for the title among the 12 teams at the Tiburon Golf Club in Naples, FL.

Homa is coming off his best season on tour, winning twice and finishing in the Top 10 four other times. This season he has already won once and last week he finished tied for seventh at the Hero World Challenge.

In another team event, Homa went 4-0 at the Presidents Cup so he is comfortable with playing with someone else. He and Kisner should improve on last year’s performance. 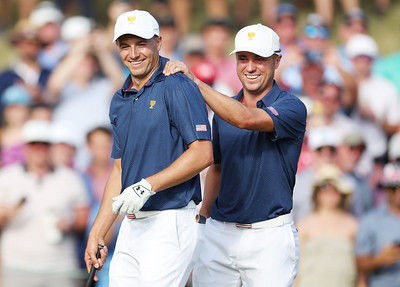 The seventh version of the made-for-TV event, The Match, is this Saturday and features Tiger Woods and Rory McIlroy facing off against Jordan Spieth and Justin Thomas.

Thomas and Spieth are the favorites, going from an opening line of -120 to the current price of -125. Woods and McIlroy are at +105.

It sounds funny to say but Woods is probably the weakest of the four players here. He hasn’t played any golf since missing the cut at the Open Championship in July. The 46-year-old missed his own tournament last week because of plantar fasciitis. He should be able to hobble around for 12 holes on Saturday under the lights.

Still, Thomas and Spieth have way too much talent and McIlroy isn’t going to be able to carry Woods the whole exhibition.

The Tennessee Titans and Jacksonville Jaguars both are mired in losing streaks. The Titans have lost two in a row, while the Jaguars have dropped their last four.

Tennessee hosts Jacksonville this Sunday and should have enough firepower to snap their losing streak.

The line has stayed steady at -3.5 for the Titans. I can’t see Jacksonville winning on the road.

Make a four-or-more leg parlay bet with odds at -200 or greater at BetRivers and if exactly one loses you get back up to $25 in free bets.