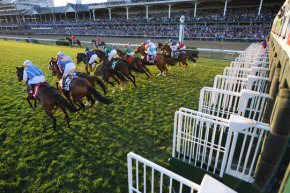 Welcome to the Euphoric Excess.

That’s how November 3 and 4 will feel to many bettors, as the one-of-a-kind Breeders Cup World Championships descends from horse-racing heaven onto Del Mar in California. The best horse racing in the entire world occurs on that one glorious weekend. Thirteen terrific races. About $28 million in purses. Well over $150 million wagered worldwide.

This is a pilgrimage for racing fans. The weekend spectacular is headlined by the $6 million Breeders Cup Classic at 8:35 p.m. EST on November 4. Whether Arrogate likes the Del Mar surface and can repeat last year’s Breeders Cup win will be a hot discussion item. Yet, bettors have much more. Day 1 contains the Juvenile Turf, the Dirt Mile, the Breeders Cup Juvenile Fillies Turf and the Distaff.

How should bettors approach all-you-can-eat racing? Prepare with logic and hope for some luck. Here are some tips to go with your hunches in the quest for Lucky 13.

Each race will present the temptation to empty your wallet. You can’t afford them all (can you?). Find the best ones that fit your preferences and be a $2 spectator for the others.

A horse that would normally be even money can go off 4-1, 6-1, maybe more in these talented fields. Excellent animals will be overlooked. That’s a great time to slam one of them if the bet fits your gut instinct.

A $1 exacta putting a horse first and second in a 15-horse field would cost $28. If you sense the race is loaded with long shots, consider it, especially if there is one horse you like for the first and second spots. That combo would pay handsomely.

Betting lines on Breeders Cup day are insane. It’s not a bad idea to line up 10 minutes before post time.

You can’t fool the public. European horses LOVE the grass. They will be played heavily, but you still might find some good prices.

6. Trifectas and superfectas can pay in four and five-figure amounts.

Let’s hope it’s the race you specialized in.

Each year is different, but in 2016, the $1 superfecta averaged more than $6,600. One was nearly $26,000 and contained the favorite. Don’t be afraid to mess around with some combos, putting the favorite in the second and third position with four or five other horses.