A Banner 2018 for Nevada Gaming 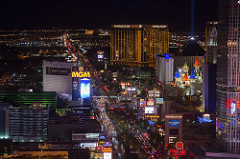 Nevada’s casinos enjoyed their third-best gaming revenue year ever in 2018.

Win was up for the fourth year in a row, totaling $11.9 billion and beating 2017’s performance by 3 percent, according to figures released by the state Gaming Control Board. It was also the eighth increase out of the last nine years, surpassed only by the pre-recession peak years of 2006 ($12.6 billion) and 2007 ($12.8 billion).

Every market had a better year than the year before, the first time that’s happened since 2004.

“The growth we have been recording is widespread across the state, not just concentrated in a few select markets,” Control Board Senior Research Analyst Michael Lawton told the Las Vegas Review-Journal. “This is a testament to the mass-market customer, which is once again driving the state’s gaming revenue growth.”

The state’s 191 sportsbooks kept a record $301 million, up 21 percent over 2017, on $5.01 billion in wagers, also a record, as newer, more versatile technologies combined with an increasing awareness of legal betting nationwide to make their impact felt.

“Most of it has to do with mobile (apps) and in-game play,” Caesars Entertainment sports book director Bill Sattler said. “In-game play has become much more popular. Everybody’s got on board with that.”

The best hold percentage in 11 years (6.01 percent) didn’t hurt either.

“There was a little bit more parity this year in the NFL,” Sattler said. “That always helps the books.”

The laggard was horse racing, where total handle of $269.1 million was down for the fourth straight year. The books won $43 million.

Market for market, the Las Vegas Strip posted $6.56 billion in total gaming revenue, up 2 percent over 2017. As a whole, Clark County, which accounted for 86 percent of the state’s total win, was up 2.7 percent.

The gains came in a flat year for Southern Nevada visitor volume, which increased only 0.2 percent to 42 million.

But it was the busiest year ever for Las Vegas’ McCarran International Airport, which recorded 49.7 million arrivals and departures in 2018, a 2.5 percent increase over 2017.

Gaming revenue in Northern Nevada’s Washoe County was up 4.4 percent to $865.7 million, led by a 4.1 percent increase in Reno, the county’s largest market.

Reno’s total of $636.9 million represented the sixth consecutive year of increases for the “Biggest Little City in the World” and the highest since 2008 as the local economy continues to climb back from the devastation inflicted by the rise of Indian gaming in Northern California at the turn of the century and later by the Great Recession.

Local experts point to an influx into Northern Nevada of large and small technology-based companies as the catalyst for an economic resurgence that is transforming the gaming sector into a true regional play, less reliant on out-of-state tourism and driven more by local consumers.

“Reno has much different economy than in years past,” said Mike Kazmierski, who heads the Economic Development Authority of Western Nevada. “The model is less susceptible to activity outside the market. Where this has helped the casinos, to some degree, is the growth in midweek business activity.”

Said Jefferies analyst David Katz, “It seems like the city has turned a corner.”