A Lyrical Salute to the ’17 Final Four 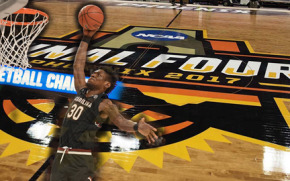 “Cry Like A Baby,” the ’60s tune via the Box Tops, applies to Wisconsin and Kentucky (also see the ’80s. They have enough heartbreak for two decades here). After upsetting the defending national champion Villanova, Wisconsin bordered on beating Florida. Then, a buzzer-beater ended the Badgers’ season by one point. Ouch. Something similar happened to Kentucky in the following round.

“Every 1’s a Winner,” the ’70s blast from Hot Chocolate, applies to the seeding committee and the sports books. The committee seeded North Carolina and Kentucky No. 1 and No. 2, respectively, in their regions. How prophetic after UNC won by two points on a shot at the buzzer to reach the Final Four. The books were on it too, listing UNC as anywhere from a two- to three-point favorite. Well projected.

“When You’re Hot, You’re Hot,” another ’70s tune from Jerry Reed, refers to South Carolina, the unheralded seventh seed, which topped third-seeded Baylor, second-ranked Duke and fourth-rated Florida, in successive games. The Gamecocks reached their first Final Four with an unusually high 10 losses and just two weeks after dropping two in a row. First they lose, then they cruise, “When You’re Hot, You’re Hot.”

“You Dropped A Bomb on Me,” the ’80s electro-funk song from the Gap Band, should be shared by Kentucky and Wisconsin, who saw their dreams dashed on a last-second “bomb.”

“How Do You Like Me Now?,” Toby Keith’s 1999 country tune, is for Gonzaga. The top-seeded Bulldogs were considered lucky by some to nip West Virginia in their third-round game. They answered by destroying over-achieving Xavier by 24 points to reach their first Final Four. How do YOU like them now, against South Carolina, minus 6.5 on first listing?

“Crazy” by Gnarls Barkley from 2006 is for Oregon. The third-seeded Ducks struggled against higher-seeded Michigan and Rhode Island, winning by a single point and by three, respectively. Then they squashed top-seeded Kansas by 14 points before 18,000 fans, just 40 miles from their opponent’s campus (which they drove past). Huh? It netted them their first Final Four appearance since 1939. Does that make them “Craa-zay?” Prob-a-blee. The Ducks play UNC next.

And finally, for those who took the bombs: “Shake It Off.” Listen to Taylor Swift’s 2014 song. There is always another season, event and a hunch to bet a bunch.

Keep your eyes on players like Brian McCann and Carlos Beltran of the Houston Astros, Edwin Encarnacion of the Cleveland Indians and Chris Sale of the Red Sox. They all have new teams, and it is never surprising for new players to have monster first games…last chance for season win-totals bets. A good idea is to project your own total, compare it to the book’s prediction and wager where you have the biggest margin.