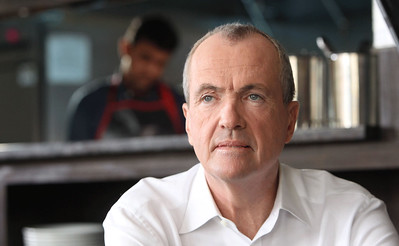 The plight of Atlantic City casinos in the coronavirus era has been matched by the generosity of many, casinos included. The industry is stepping up to provide food for jobless employees, and working to establish safety parameters that Governor Phil Murphy (l.) will accept to reopen.

On May 28, the Community FoodBank of New Jersey held its second distribution of donations for casino workers and other residents of Atlantic City. More are planned in June and July, if needed. Chances are they will be.

While the industry works on a detailed plan to get casinos back in business, Governor Phil Murphy has not committed to a date, though more and more businesses are getting the green light.

“These funds will be used along with other private donations from the casino and labor industries to sustain a food distribution initiative for three months,” said CRDA Deputy Executive Director Rosa Farias.

Hard Rock has held gift card giveaways for its employees; nearly 3,000 workers received $100 grocery store gift cards at each event, for a total of $600,000, said Property President Joe Lupo. “We had two giveaways, and they were extremely well-attended by our employees—all hourly employees, full-time, part-time, on-call and salaried who make less than $50,000. We had so many volunteers that wanted to help and support the effort, and it was wonderful to see our team members, who were so grateful and appreciative.”

Scheduling a third giveaway depends on how long the shutdown continues, he said.

As uncertainty swirls around Atlantic City’s casinos, Nevada Governor Steve Sisolak said positive data trends gave him the impetus to reopen the casino industry there. “I have informed the chair of the Gaming Control Board that I feel confident in the June 4th target date,” Sisolak said in a statement.

To Jane Bokunewicz, coordinator of the Lloyd D. Levenson Institute of Gaming, Hospitality & Tourism at Stockton University, the data explains why Atlantic City isn’t ready when Nevada is. New Jersey and New York still remain the epicenter of Covid-19 cases in the U.S. Nevada doesn’t come close to their numbers.

On May 27, according to the Centers for Disease Control and Prevention (CDC), New Jersey had more than 155,000 cases compared to fewer than 7,900 for Nevada. Additionally, a large percentage of visitors to Atlantic City travel from New York, which still has the highest number of cases (365,405 as of May 27).

“Atlantic City is approaching the busiest season of the year, so casinos need to plan for peak levels of visitors which also warrants proceeding with caution. Iowa and Nevada have more consistent visitor counts throughout the year,” Bokunewicz said.

The city’s casinos have not yet released their planned safety protocols, but it’s reasonable to expect they will include advanced cleaning procedures, limited capacity, reduced number of gaming positions, employees wearing masks, and Plexiglas barriers where possible.

“Most have plenty of room to accommodate social distancing,” Bokunewicz said. “The collaboration between the Casino Association of New Jersey and AtlantiCare in planning for reopening ensures an informed approach to providing a safe and healthy environment for employees and customers.”

As the economic impacts of the crisis worsen, the Community FoodBank expects that the need for food assistance will extend beyond June, when the remaining four casinos get their assistance. “We already have distribution dates planned for July,” said spokeswoman Nicole Williams.

Meantime, first-quarter gross operating profits in Atlantic City declined 65 percent. Figures from the New Jersey Division of Gaming Enforcement show $29.6 million in profits in the first three months, down from $85.6 million in the same period last year—and that period only included two weeks of shutdown. The second quarter could be much worse.

The big decline is “not surprising, given that most casinos continued to pay employees for two weeks after the shutdown,” Bokunewicz said. “With only internet gaming and a small amount of sports betting revenue to offset payroll expenses, a significant decrease was inevitable.”

Three casinos swung from a first-quarter profit last year to a first quarter loss this year: Bally’s, Caesars and Resorts. Profits declined on four other properties, but they still remained on the plus side. Hard Rock showed an operating loss in both periods but improved its performance this year. The same dynamic held true for the Ocean Casino Resort.

Another casualty is the CRDA. The agency has been hard hit by the decline of tourism to Atlantic City. “The Covid 19 pandemic has led the CRDA to focus on the community development arm of its mission through the reallocation of existing funds to go toward much needed community-based programs,” Farias said.

Add Atlantic County Democratic Chairman Michael Suleiman to the voices that want a date to reopen the casinos in Atlantic City. He asked Governor Murphy to come up with a plan to safely open the doors by July 4th weekend.

“The Atlantic City metro area saw a stunning 32 percent decline in employment, and we run the real risk of having one or more casinos stay shuttered if the casinos can’t capitalize on Fourth of July weekend, which would result in thousands of middle-class and working-class residents losing their jobs,” Suleiman said. “The casinos weren’t ready for a Memorial Day weekend opening, but if we start now and if strict social distancing and cleanliness standards are established, then July 4 is a realistic goal.”