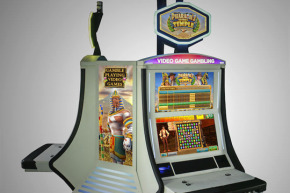 “Pharaoh’s Secret Temple appeals to a more casual audience and is similar to mobile ‘match 3’ games such as Candy Crush.”

Graboyes founded GameCo in 2015 and said that the company raised $8.3 million in venture capital to fund the Atlantic City launch.

The casinos, eager for new revenue streams, are hoping the VGMs will entice millennials, who are more likely to play video and social media games than slot machines, to spend more time and money at the casinos, the site reported.

According to NorthJersey.com, Atlantic City’s combined casino revenue has fallen by more than 50 percent since 2006, when Pennsylvania and New York opened casinos near the New Jersey border. And, the number of casinos in the city dropped from 14 to seven in 2014.

“The video games are an example of efforts by state regulators to consider a variety of gambling options to help boost Atlantic City casinos and raise more tax revenue,” the site said.

Next month, GameCo expects to receive permission to expand into Connecticut and plans to operate in most major U.S. gambling jurisdictions within the next year, the Las Vegas Review-Journal reported. The company needs approval from Nevada gaming regulators before it can place its machines on Las Vegas casino floors.