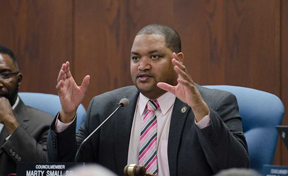 Atlantic City Mayor Marty Small (l.) wants the city to get what racetrack towns get: a share of the sports betting revenues generated in casinos. City Council agrees. But the state doesn’t look too willing.

The New Jersey communities that house the two race tracks with sports betting—East Rutherford and Oceanport—receive a piece of the action for the trouble of hosting the tracks. Each collects a 0.75 percent cut of the gross sports betting revenue. In addition, their host counties, Bergen and Monmouth, obtain 0.5 percent.

Under state law, Atlantic City’s cut of 1.25 percent of the taxes on sports betting goes to a state agency, the Casino Reinvestment Development Authority, which uses it to market the resort.

Appearing before the Atlantic City Taxpayer’s Association last month, Small decried, “In 14 months, New Jersey has overtaken Las Vegas as the number 1 sports betting destination, and a lot of it has to do with the success of Atlantic City, and a lot of it is online. But we don’t get one penny. Just think about that. That’s unacceptable.”

State officials aren’t buying the city’s argument so far, according to the Associated Press. One reason? The municipality has to prove it can be trusted with the resources it already has.

Atlantic City remains under a state takeover of most municipal power that was launched under former Republican Gov. Chris Christie, with the blessing of the Democratic-controlled state Legislature, including Sweeney.

Since sports betting began in New Jersey a year and a half ago, the CRDA has received nearly $1.6 million in sports betting payments earmarked for marketing Atlantic City, and the municipalities and counties that host the two horse tracks have gotten nearly $2 million.