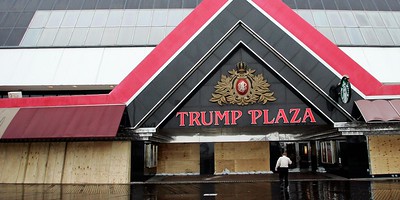 Push has come to shove for Atlantic City officials, impatient to see the aging Trump Plaza demolished. They may take owner Carl Icahn to court to rid themselves of the derelict gaming hall. But Icahn says he’s already started the process.

Officials in Atlantic City have announced they will seek a court order to have the former Trump Plaza Hotel & Casino demolished. A video recently posted on social media showed large chunks of debris falling from the structure’s facade to the sidewalk below.

Lawmakers in the town say the former gaming hall, closed for years, is a safety hazard, particularly given its location on the Boardwalk, a famous oceanfront promenade traveled by millions of people each year.

During a news conference last week, Mayor Marty Small Sr. said the city and the building’s owner, Carl Icahn, have been engaged in “good faith negotiations” over the future of the shuttered casino hotel, but the “game has changed,” as the old Plaza continues to deteriorate.

“Our legal department has been working hand-in-hand with the state of New Jersey on this matter,” said Small, who added he is willing to take “aggressive” action on the matter.

“Today, we are saying to Carl Icahn that we want this building torn down,” the mayor said. “We want the world to know that we mean business.”

“We are puzzled by the city’s actions,” Gary said. “In fact, we have already decided to demo the building and have commenced the process, including finalizing contracts. If the mayor had simply called us instead of holding a press conference, we could have updated him too.”

Icahn bought the building in 2016 when he purchased the debt of bankrupt Trump Entertainment Resorts. According to the Press of Atlantic City, the city has put a 24-hour police detail in the vicinity of the property to prevent passersby from using the sidewalk next to the building. Additionally, city officials said a portion of the Boardwalk would be fenced off as a precautionary measure.

Small said estimates to demolish the former Trump Plaza were between $11 million and $14 million.

Anthony Cox, a city construction official, said an “imminent hazard notice” was sent “to the owner and agent.”

Fire Chief Scott Evans added that the Plaza’s oceanfront location make it susceptible to the elements, and exposed portions of the building could cause water damage to spread.

“Sooner or later, the water is going to work its way into different areas,” Evans told the Press. “And through expansion and contraction, these connections are going to fail. We’re going to see more panels fall. This is a serious hazard.”