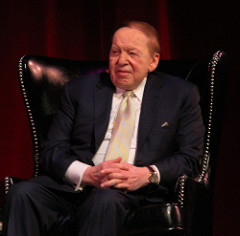 This fact was revealed last week after speculation over the 85-year-old’s health hit high gear. While there have been rumors for months that Adelson has been absent from the corporate LVS offices, preparation for the retrial of a lawsuit brought by former Macau operative Richard Suen brought the point home. LVS attorneys said Adelson was not prepared to testify due to the “dire nature of (his) condition, health and that he had, in fact, not participated in the company proceedings in terms of being physically present in Las Vegas at the company on Las Vegas Boulevard, since approximately Christmas Day.”

The next day, Las Vegas Sands issued a press release saying Adelson suffers from Non-Hodgkin Lymphoma, and that he is suffering from the side effects of the treatment.

“These side effects have restricted his availability to travel or keep regular office hours,” the statement said. “They have not, however, prevented him from fulfilling his duties as chairman and CEO.”

Non-Hodgkin Lymphoma is a blood cancer that can spread quickly, particularly among older patients.

Suen is suing Las Vegas Sands, alleging the company owes him millions of dollars for his assistance in helping LVS gain a gaming concession in Macau in 2002. This is the third trial over the lawsuit. The first two rounds found in Suen’s favor but the verdicts were later thrown out by appeals courts.

It’s not only Suen’s lawyers that have an issue with Adelson’s health, it’s also some of his shareholders. While Adelson controls over 50 percent of the stock of LVS, there are still many shareholder who would be concerned. Adelson missed the fourth-quarter earnings call because, according the LVS President Rob Goldstein, he was “under the weather.”

Judge Robert Bare said the 85-year-old tycoon will not have to testify or sit for a deposition in the civil trial, which is slated to commence this week.

Benjamin Edwards, an associate professor at UNLV’s Boyd School of Law, said there is no requirement under SEC regulations that force a company to divulge the health of an executive, but in this case, there’s reason to be concerned.

If a company knows an executive is ill, and they were described as a risk, this is something shareholders might want to know,” Edwards told the Nevada Independent. “If any key CEO is too ill to participate in depositions, it is likely material to shareholders because the same health issue may limit his ability to act on behalf of the company. Still, the mere fact that reasonable shareholders would probably like to know about it, of course, does not mean that the company automatically has an obligation to disclose it.”

Sanford Bernstein analysts Vitaly Umansky, Kelsey Zhu and Eunice Lee were quick to play down any potential negative impacts on one of the world’s largest gaming companies, noting that LVS and its Macau subsidiary, Hong Kong-listed Sands China, “both have strong management teams, and there is an internal succession contingency in place in the event of Mr. Adelson’s inability to perform his duties as chairman and CEO”.

“Should Mr. Adelson’s health situation worsen, we do not believe it would have negative implications with respect to any of Sands’ existing operations (whether it be in the U.S., Macau or Singapore),” the analysts said in a client note. “Nor should Mr. Adelson’s potential absence impact LVS chances in any potential Japan IR bid.”