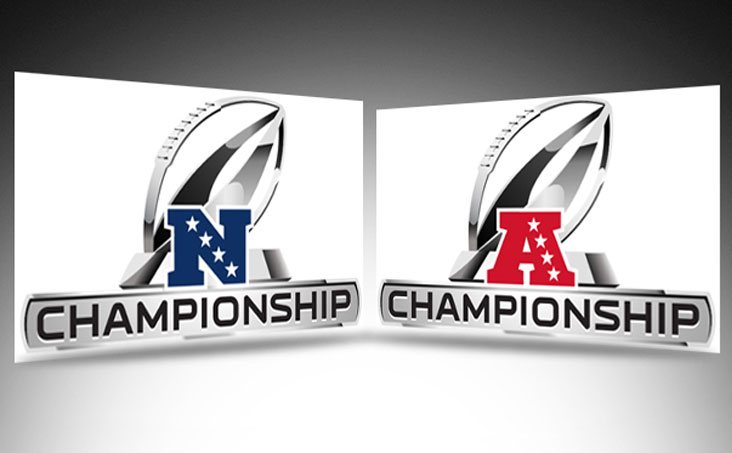 The NFL Divisional Playoffs were ruled by underdogs. But look for the favorites to prevail in Sunday’s AFC and NFC Championship games.

Last week’s NFL Divisional Playoffs were among the most exciting in football history. Three of the four underdogs pulled off upsets with last-second field goals, and the Buffalo Bills were just 13 seconds away from beating the Kansas City Chiefs. If they had, it would have been the first time in Divisional Playoff history that all four favorites were defeated.

Next up: the AFC and NFC Championship games on Sunday, January 30. In the AFC Championship, the Cincinnati Bengals face the Kansas City Chiefs.

This game opened at 6.5 points, but quickly went up to 7.5 at both BetMGM and Caesars Sportsbook. BetMGM has kept it at that number, but Caesars dropped it to seven points. Other sportsbooks, PointsBet and BetRivers, are at seven points as well.

The NFC Championship is a battle of NFC West Division teams. The San Francisco 49ers will travel to play the Los Angeles Rams for the third time this season.

Despite the 49ers defeating the Rams twice in the regular season, they’re now 3.5-point underdogs. The line opened at four points, but moved to 3.5 at most sportsbooks. Caesars has dropped the odds down to three points. In the two previous games, L.A. was favored by 3.5 points.

Let take a look at both NFL games and make our picks.

Try a One-Game Parlay on the NFL at BetMGM! Build a parlay by selecting the winner, total and multiple player props from a single game. 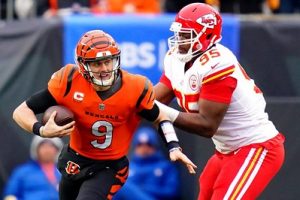 The Cincinnati Bengals are the surprise of the NFL season. Cincinnati started at +15000 to win the Super Bowl. Oddsmakers were so down on the Bengals, in August they picked them last to win the AFC North at +2500 and placed their season over/under win total at 6.5.

Though Cincinnati won the division, finishing with a 10-7 record, it still wasn’t expected to do much in the playoffs. In the Wild Card game, they were 6.5-point favorites over the Las Vegas Raiders and covered, winning 26-19.

The Bengals came to last weekend’s Divisional Playoff a four-point underdog to the Tennessee Titans. They won on a last-second field goal, 19-16.

Their toughest test is ahead, meeting the Kansas City Chiefs. Once again, the Bengals are the underdog, getting seven points as the road dog. The two teams met nearly a month ago at Paul Brown Stadium. Cincinnati got 3.5 points at home and won, 34-31.

Can they find the same success at Arrowhead Stadium? If the Bengals expect to advance to the Super Bowl, they have to cool down a very hot Patrick Mahomes. The Chiefs quarterback threw for 378 yards in the win against Buffalo. Mahomes’ targets were tight end Travis Kelce and wide receiver Tyreek Hill. Kelce had eight receptions for 96 yards and a touchdown. Hill was even more lethal, getting 11 catches for 150 yards and a touchdown.

Cincinnati quarterback Joe Burrow will be leaning on his former LSU teammate, wide receiver Ja’Marr Chase. The two connected for five receptions and 109 yards against Tennessee. One question mark for Kansas City: will safety Tyrann Mathieu get out of concussion protocol in time for the game? He suffered the injury in the first quarter of the Buffalo Bills victory.

This is the third consecutive AFC Championship game for the Chiefs. It’ll be close, but Kansas City should be able to end the Bengals’ NFL dream run.

Get 1 Boost on Traditional NFL Parlays and 1 Boost on Single-Game Parlays every day at PointsBet! Create a 3+ Leg Parlay or Single Game Parlay in your betslip, and you’re in. 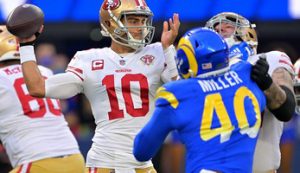 When the Los Angeles Rams and the San Francisco 49ers met twice during the regular NFL season, San Francisco pushed the Rams around, winning both games. The losing streak stretches back six regular-season games.

Now the NFC West foes meet for the third time. As in the previous two matches, Los Angeles is the favorite at 3.5 points. The rematch was the last game of the season and the 49ers had to win to reach the playoffs. They did, narrowly defeating Los Angeles, 27-24.

Los Angeles is coming off two impressive victories. The first was at home against the Arizona Cardinals in the NFL Wild Card Playoff. The Rams steamrolled Arizona, winning, 34-11, as a 3.5-point favorite.

Last Sunday, the Rams were three-point underdogs against the Tampa Bay Buccaneers. The Rams rushed out to a 27-3 lead, then hung on to defeat Tampa Bay 30-27 with a last-second field goal.

Now the Rams are exuding confidence, and All-Pro defensive tackle Aaron Donald said he expects his team to win.

“I feel like it’s like the perfect setting,” Donald said. “To get to where we need to get, we’ve got to play a divisional opponent that got the best of us the last couple times. So you wouldn’t want it no other way than what we got right now. So get ready for a dogfight.”

Register a new Caesars Sportsbook account and your first real money NFL wager will be matched with a Free Bet up to $1,001 – win or lose! Minimum odds -200.

How to Watch
Grab a brew and some wings and settle in for the big games. Watch here:

Place a real money, single wager of $25 or more on any NFL Playoff Game at BetRivers. You’ll receive a $10 Free Bet for the Australian Open.