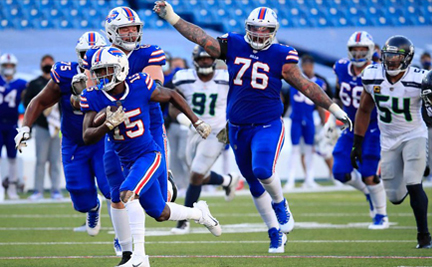 With the 2020 NFL playoff picture taking shape, let’s forecast how each playoff spot will be filled after the final six weeks of action, including a couple of wild cards.

The 2020 NFL season has been a rollercoaster, to say the least. Covid-19 has had a great effect on this season, postponing games left and right. That being said, no games have been canceled and the plan is still to complete each team’s 16-game schedule. It’s time to take a look at each playoff spot and which team has the best chance to fill it.

The Miami Dolphins exceeded expectations this season, while the other two teams in the AFC East managed to do the opposite. This started as the Buffalo Bills’ division to lose, and it should finish that way. A Week 17 matchup between Buffalo and second-place Miami, which trails by just a game, could determine this division. I’ll give the edge to the team with an MVP candidate QB (Josh Allen) and more post-season experience.

The AFC North is one of just a couple divisions that seem to be already decided. The Pittsburgh Steelers haven’t lost a game yet, and don’t look ready to any time soon. While the Steelers’ chances of finishing undefeated are historically very slim, this season’s team is for real. The team is dominant on both sides of the ball in almost every single game, and does a good job of taking the opposition out of the game early. Their biggest challenge may be coming at the moment, however, as their Week 12 game was pushed back all the way to Wednesday and their star running back, cancer survivor James Conner has tested positive for Covid-19. Expect this team to overcome some adversity and finish with 14 or 15 wins.

High-five the football season with a series of Free Contests with huge prizes to make every NFL moment extra wild. Check out HardRockCasino.com for Pick’em Live, Streak, Survivor Pool and Weekly Square Pools.

Heading into Week 12, the Tennessee Titans and Indianapolis Colts were tied atop the division at 7-3. The Colts had beaten Tennessee in their first matchup and so held the division tie-breaker. The Titans came out hot against their fellow division leaders, and ended up coming away with a 19-point road victory. They now find themselves atop the AFC South and devoid of any future tie-breakers with Indy. And with top MVP candidate Derrick Henry running the ball, I don’t see this team losing their success any time soon.

You can mark this one as finished. It’s all but official that the defending champs will take the AFC West yet again and head into the AFC playoffs with the top or second seed and a first-round bye. The Kansas City Chiefs possess a four-game division lead with just five games left to play. Unless the miracle of a lifetime happens (hey, it is Vegas), the Las Vegas Raiders don’t stand much of a chance of catching Patrick Mahomes and the Chiefs.

Get a free NFL Profit Boost every week at PlaySugarHouse.com. Just log in every Sunday and receive a 50% Profit Boost to use on the NFL! Maximum $50 Wager and $250 Maximum additional earnings.

This is the year of overachieving young teams in Miami! I don’t have to defend that claim too much with the Miami Heat, as they overachieved their first or second round projection by coming two wins away from hoisting the Larry O’Brien trophy. The Miami Marlins are much more comparable to the Miami Dolphins. Both teams were projected to continue tanking and finish around the cellar of their respective divisions. Instead, the Marlins earned a top wild-card spot and advanced to their first postseason in 17 years, ending in a second-round sweep via the Atlanta Braves. This Miami team looks to follow a very similar pattern here, and maybe even follow suit in advancing through to the second round! Don’t sleep on those young studs in Vice City!

There’s been a major resurgence this year of the Cleveland Browns after an extremely disappointing 2019 season. We’re starting to see the Browns squad that we expected last year, despite losing Odell Beckham, Jr. for the season. This team still looks very capable without OBJ, specifically running the ball. Other than Tennessee, not many (if any at all) other teams still deploy a traditional ground attack. Cleveland does it in a different fashion than Tennessee, however, in that the Browns’ backfield features (arguably) two Top 10 running backs. These two backs, Nick Chubb and Kareem Hunt, both can offer stifling power and top-end speed, making this a tough matchup for even the league’s best run defenses. Cleveland could find a couple nice matchups in the playoffs and surprise some people.

Your next parlay of 3 picks or more could net you up to $25,000 in cash on top of your winnings at ResortsCasino.com. Just make your picks and place your parlay bet. If it wins, you’ll get the extra cash—anywhere from 5% to 60% of your regular payout.

There are still plenty of factors that could change this season’s playoff format and schedule, such as adding an additional Week 18 to account for postponed games. Another could be adding two extra playoff teams in each conference to get to eight each (16 total) and removing first-round byes.

While only time will tell what comes of those possible changes, we for now will plan for a traditional NFL postseason. And if that’s what we get, it should be one for the ages as there is elite talent all over the league this year. I’ll be back next week to preview the NFC’s playoff teams. Until then, enjoy all of the Week 13 action and keep an eye on those live lines!