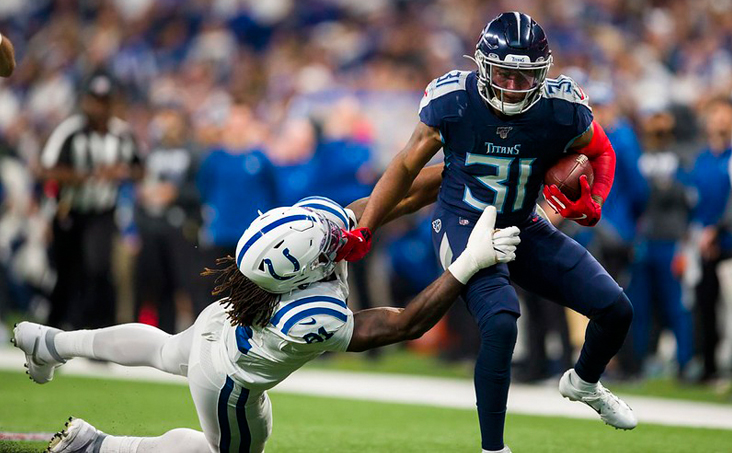 These divisional lines could shift dramatically after Thursday Night Football, with the Tennessee Titans expected to clobber the Indianapolis Colts for the AFC South win.

The Tennessee Titans (-190) are currently favored to win the AFC South over the Indianapolis Colts (+155).

Indianapolis’ terrific defense is a reason why the team hasn’t had an over/under above 49 this entire season. The over/under has gone 4-4 in Colts’ games this year after snapping a three-game over streak.

The over/under has gone 5-2-1 in Titans’ games this season.

Get all the best bets for the NFL season on BetQL.co. Dating back a full calendar year, its five-star (max-value) bets have won 61% of the time!

Ever since the Titans entered Ryan Tannehill into the starting lineup, all they’ve done is win. After going 7-4 in 11 starts in 2019, taking the Titans to the AFC Championship, he’s led them to a 6-2 record and a first-place position in the AFC South. Tennessee (-190) is currently favored to win the AFC South over Indianapolis (+155).

The Titans come into this game after a dominant 24-17 performance against the Chicago Bears. The game wasn’t as close as the score indicated, as the Titans entered the fourth quarter with a 17-0 lead. Tannehill has been efficient as usual this season. He only completed 10-of-21 passes for 158 yards, but he tossed two touchdowns and didn’t turn the ball over. Their formula is simple. Protect the ball, get a couple deep shots down the field to Corey Davis and A.J. Brown, and let Derrick Henry go to work down the stretch.

Speaking of Henry, the former second-round pick is once again putting together an incredible season. He’s rushed for 843 yards on the season, putting him on a near 1,700-yard pace. He’s at his best late in games when the defense is worn down, as his big body and attacking style plays to the Titans’ strength as a team.

In last week’s win over Chicago, however, Henry was held to just 68 yards. Let’s hope this was an anomaly and not an indication of things to come after the injury to Taylor Lewan.

Talk about a letdown. In the first half of their game against the Baltimore Ravens, the Colts looked primed to pull the upset. They entered halftime with only a 10-7 lead, but it wasn’t the size of the lead, it was how they did it. They simply shut down the Baltimore offense, and without a fumble that was returned for a touchdown, Indianapolis would’ve shut them out in the first 30 minutes.

The Colts’ terrific defense is a reason why the team hasn’t had an over/under above 49 this entire season. The over/under has gone 4-4 in Colts’ games this year after snapping a three-game over streak.

Indianapolis was outscored 17-0 in the second half and simply couldn’t get anything going offensively. Philip Rivers threw for an inefficient 243 yards with only one touchdown, and the running game was shut down by the Baltimore front. Of their running backs, Jordan Wilkins led them in rushing with only 39 yards.

Sitting at 5-3, the Colts are currently on the outside looking in for the AFC Playoffs right now due to tiebreakers. Looking at their next three games, it’s clear these games will go a long way in deciding their fate this season. Look for them to play with a sense of desperation against Tennessee after feeling like they blew their chance against Baltimore to establish themselves as a true contender.

As with any TNF game, this game could go either way. However, this matchup is especially close. The Titans lead the AFC South over the Colts by only one game, and this matchup will put the winner in first place with the current tiebreaker. This could really shift futures odds for the division, so get your bets in now if you like one of the lines now!

If the Titans win, they’ll essentially have a 2.5-game lead based on tiebreakers, a deficit that could be tough for the Colts to make up. With the spread being set at a minuscule two points, it’s expected that this game will be a close, hard-fought game. With the divisional lead on the line, it’s easy to expect the same. It’ll come down to which defense can make more game-changing plays down the stretch.

If you or someone in your life has a gambling problem, help is available. Call 1-800-GAMBLER or visit 1800Gambler.net.

Take A Spin with the

iGaming Off to a Goo