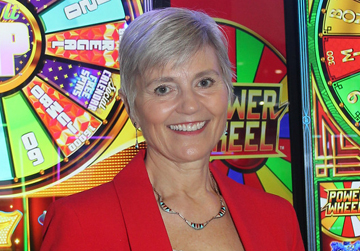 The American Gaming Association has announced three industry members to be inducted into the Gaming Hall of Fame. This year’s additions include Elaine Hodgson (l.), co-founder, president and CEO of Incredible Technologies; Ernie Moody, president of Action Gaming and the creator of Triple Play Poker; and casino developer Stanley Mallin.

The American Gaming Association will add three names to its Gaming Hall of Fame roster: Elaine Hodgson, co-founder, president and CEO of Incredible Technologies; Ernie Moody, president of Action Gaming and the creator of Triple Play Poker; and casino developer Stanley Mallin. The three were selected by an independent panel of gaming executives. They’re chosen based on their contributions to the gaming and entertainment industries.

According to the Las Vegas Review-Journal, Hodgson founded Incredible Technologies in 1985 in a basement with fewer than a dozen employees. The company created Golden Tee Golf in 1989, and entered the casino market 18 years later. Today, Incredible Technologies lives up to its name as one of the fastest growing video slot game developers based in the U.S.

“Under Elaine’s leadership, Incredible Technologies introduced the most successful pay-to-play game in the U.S.,” AGA president and CEO Bill Miller said in the release.

In the 1990s, Moody created a number of poker games that are staples on casino floors, according to the release. They include Triple Play Poker, Five Play, Ten Play, Hundred Play, Spin Poker and more. About 20,000 machines across North America use his patents and inventions. Moody’s “resilience and innovation changed the landscape of video poker,” Miller said.

Mallin and Jay Sarno, a 1989 Gaming Hall of Fame inductee, opened Caesars Palace for $24 million in 1966 and sold the property three years later for $60 million. According to the release, Mallin—now 96 and still living in Las Vegas—introduced the now-ubiquitous concept of “experiential casinos” with the opening of Circus Circus in 1968.

The three will formally join the Gaming Hall of Fame during the Global Gaming Expo in Las Vegas. The induction will be part of the Chairman’s Reception on October 15 at the Palazzo.

“Elaine, Ernie, and Stanley are pioneers in the gaming industry and have earned their well-deserved induction into this elite group,” AGA CEO Bill Miller said in a statement.