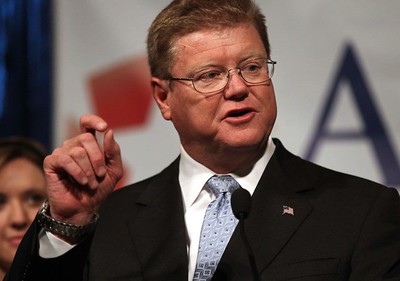 Small Business Administration guidelines that lock out gaming companies from applying for forgivable loans under the CARES Act are drawing fire. The AGA calls it outright discrimination. Nevada Rep. Mark Amodei (l.) said the shutout has added up to 2 million people to unemployment rolls.

The American Gaming Association is calling foul on Small Business Administration (SBA) guidelines that make it almost impossible for a significant part of the economy to qualify for forgivable loans, meant to provide assistance to businesses hit by the Covid-19 pandemic.

These loans are part of the $2.2 trillion Coronavirus Aid, Review, and Economic Security Act (CARES) Act. As of last week, the first round of loans had already run out.

Tribal casino gaming is particularly affected. During the first two weeks of the shutdown, Meister Economic Consulting estimated $4.4 billion in lost economic activity, with 296,000 people out of work, $969 million in lost wages and $631 million in lost tax revenues at all levels of government in the U.S.

Tribal gaming accounts for more than 500 gaming facilities in 29 states operated by 246 tribes.

Although the SBA has agreed to make some changes, gaming industry representatives call the changes “half measures.”

The SBA loans are forgivable if used to pay workers or other essential bills during the pandemic. Some $349 billion in forgivable Paycheck Protection Program loans, which were rolled out on April 3, allow businesses to borrow up to 10 weeks of payroll expenses. But they exclude gaming tribes, commercial casinos and any company that obtains more than a third of its revenue from gaming.

AGA head Bill Miller wrote to the Trump White House saying the regulatory guidelines “discriminate against these mainstream businesses and, more importantly, the hundreds of thousands of employees who rely on gaming for their livelihood.”

Miller also assembled a group of congressional members from both parties whose states have tribal gaming and commercial gaming to write to Trump and SBA Administrator Jovita Carranza. When asked about this by the Las Vegas Review-Journal, Trump remarked, “We’ll take a look at that. Nevada is a great state. We’ll take a look very strongly.”

National Indian Gaming Association Chairman Ernie Stevens Jr., added his voice, saying, “The National Indian Gaming Association condemns the SBA for its blatant disregard of the Congressional language in the Covid Relief Act.” He added, “The SBA’s guidance fails to recognize the importance of the survival of Tribal government gaming for its citizens and non-tribal neighboring residents.”

Miller’s letter to Trump enclosed letters from members of Congress, including six from Nevada, who represent states where casinos are an important part of the economy: “The enclosed letters underscore the clear intent behind the legislation to help more, not fewer businesses during their time of need.” He added, “The regional diversity of these members also underscores the impact SBA’s unjustified decision will have on gaming workers and businesses in numerous states across the country.”

The Nevada congressional delegation writing to the SBA included U.S. Senator Jacky Rosen of Nevada. The letter said many communities in the state heavily rely on gaming as a major employer, taxpayer and economic engine—especially in the travel and tourism industry.

“This bipartisan issue deeply affects Nevada and many states throughout the country that depend on the revenue and jobs created by the gaming industry,” the letter said. “Given these dire and unprecedented times due to the coronavirus outbreak, we ask that you provide much-needed relief for Nevada small gaming businesses as soon as possible.”

Another Nevada lawmaker, Rep. Dina Titus, fired off this statement:

“The Trump administration’s attempt to arbitrarily pick winners and losers is detrimental to the recovery. It’s obvious that President Trump and (Treasury) Secretary Mnuchin do not understand the struggles of working people employed by smaller gaming establishments in Las Vegas and across the country. That’s why I will soon introduce legislation to ensure that none of these small businesses is prevented from receiving relief.”

U.S. Senator Mike Rounds of South Dakota argued in a separate letter to Carranza that the Paycheck Protection Program was a separate new program that should be distinct from previous SBA policies on gaming. “Leaving these types of small businesses out of important federal recovery efforts would prove crippling to South Dakota,” he wrote. “Given the expansive nature of the PPP and the intent for every small business that wanted it to received PPP assistance, it would make no sense to apply the one-third annual revenue from gambling threshold to small businesses.”

In California’s Lake County, the board of supervisors voted to ask the SBA to include tribal governments and casinos in its relief funding. The board wrote that the regulations “directly conflicts with both the text and overarching goals of the CARES Act.” Two supervisors, Chairman Moke Simon and Supervisor Ej Crandell, are tribal leaders of the Middletown Rancheria and Robinson Rancheria, which both operate small casinos—both shuttered.

Despite the criticism, Mnuchin early last week doubled down on the SBA’s rules, saying they would not be amended to include gaming. “There are such things as small taverns and restaurants that have literally, small gaming things, and we are coming out with some additional guidance on that,” he said. “But I want to be clear, it’s not small casinos.”

Rosen added, “While SBA has taken a step forward on this issue, a rule that excludes our gaming manufacturers and casinos is wholly insufficient.”

Nevada Rep. Mark Amodei, in a radio interview, said SBA guidelines, originally written in 1996, show “the cultural arrogance at the SBA, that has apparently allowed the agency to blithely decide who Congress was attempting to help.” He added, “Congratulations, SBA—between suppliers and contractors, you’ve effectively added between one and two million people to the unemployment rolls Your internal definition of rescue has successfully made about 100,000 small businesses and their supporting industries ineligible for rescue. Good thing you’re not running the Coast Guard.”

The Iowa Gaming Association, which represents 19 casinos, some with fewer than 500 workers, has also criticized the SBA guidelines. IGA President and CEO Wes Ehrecke called the casinos a major economic engine for Iowa, particularly as they relate to small businesses and charities.

California’s other gaming industry, its more than 60 commercial card clubs, have also been similarly “gut-punched” by the pandemic, along with the Golden State cities who depend on their tax revenues. That includes several card clubs in the Los Angeles area, with the hardest city being Hawaiian Gardens, with almost 70 percent of its general fund coming from fees and revenues generated by the Gardens Casino. The city faces layoffs in police, youth and senior programs and transportation.

Most of the card clubs have fewer than 500 employees, the California Gaming Association wrote in a letter to the Golden State’s congressional delegation, but they too don’t qualify for PPP funds. Association President Kyle Kirkland wrote, “Without the help of PPP funding, California’s gaming operators, all of which voluntarily ceased operations in mid-March, will be forced to permanently lay off employees and some may not be able to reopen.”

The Gardens Casino employs 2,000 people, and so falls well above the PPP threshold, but still seeks SBA funding. The card club’s general counsel Keith Sharp told the Los Angeles Daily News, “The SBA has a longstanding rule that doesn’t allow loans for gambling businesses. We’re trying to fix that, but we’re having a heck of a time right now. We’re hopeful that some elements of the stimulus package will loosen the reins. Many of our employees are minimum wage workers who rely on tips.”

Hawaiian Gardens Mayor Myra Maravilla wrote to California Governor Gavin Newsom that the casino’s closure “has the most significant financial impact to any city with a casino in the state of California and has played a critical role in the city’s ability to fight crime and roll back major gang issues.” Besides seeking SBA funding for the casino, she asked the state to direct some of its gambling control commission fund’s $97 million surplus to help it reopen.

Even if the SBA does change its guidelines, the loans are given first-come, first serve and the money dried up last week with already $205 billion being processed so far by lending institutions. Trump has asked Congress to appropriate another $250 billion for the program.

Rep. Tim Cole of Oklahoma, who is also a member of the Chickasaw Nation agrees. He told constituents in a video address, “This is a program that we know is going to need additional money,” adding “Frankly, there’s no disagreement about that.”

That call was taken up April 13 by House Speaker Nancy Pelosi and Senate Minority Leader Chuck Schumer in a joint statement: “Further changes must also be made to the SBA’s assistance initiative, as many eligible small businesses continue to be excluded from the Paycheck Protection Program by big banks with significant lending capacity.”

Just as the fund ran out of money, Dante Desiderio, executive director of the Native American Finance Officers Association, told Indianz.Com., “All of this stuff is happening and tribes are still not in the mix,” adding “Every day, we keep getting left out.”

Reacting to the criticism, the Department of the Treasury finally scheduled tribal consultations on PPP with SBA, almost unintentionally living up to the old adage, “a day late and a dollar short.”

“I’m just concerned that SBA waited this long to fix it,” Desiderio said. “Every day that goes by we are getting more and more shut out of that fund.”