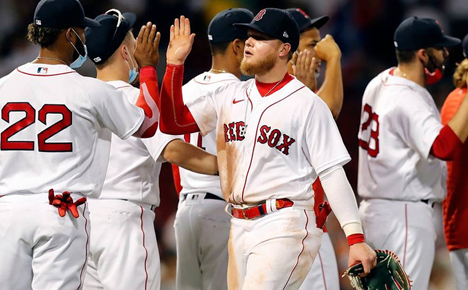 The Boston Red Sox are projected to win the American League East, with the third longest odds. What makes them dangerous? Their lineup, including J.D. Martinez, Rafael Devers, and Xander Bogaerts.

Last month, I said the New York Yankees were your best bet to win the American League East. I expected some positive regression and better health on the way for the Yanks to go on a run. Since then, after a sweep by division rivals the Boston Red Sox, the Yanks have been one game over .500, and now sit 6.5 games out of the division lead of the Tampa Bay Rays, fourth in the AL East.

New York still has the second shortest odds to win the division. While I don’t advocate jumping on the Yankees right now, there’s some value on the board.

See who the pro bettors love today. Check in at BetQL.co for today’s best picks, and unlock sharp picks, too. 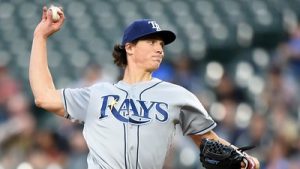 Tampa Bay has a slight lead on the Red Sox—as of this writing, a half-game. The team has a true ace in Tyler Glasnow, but they truly thrive once the game enters the bullpen, posting the fourth best ERA as a unit in the Major Leagues.

A strong pitching staff has kept a middling offense in check. The team does draw a ton of walks, sixth best in the league, but also strikes out at the second highest rate.

Either way, with the likes of Austin Meadows hitting well—.350 on base percentage and 14 home runs—Tampa Bay’s been able to put together a run differential of +75, despite not being dominant at the dish. They cash in on opportunities, but don’t overwhelm with offensive firepower.

It’s tight, but with a deep staff that can navigate through games and an offense that gets on base and is Top 10 in wRC+, the Rays are the rightful favorites.

Bet sports this summer for up to $1,000 in Free Bets at WilliamHill.com. Straight, Parlay and Teaser Wagers earn points towards your Free Bet. Must enroll by July 31. 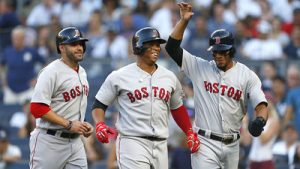 There’s always some lag time in a futures market like a division winner, but the Boston Red Sox should have moved past the Yankees after their weekend sweep of the Bronx Bombers.

Boston gets amazing production from its pitching staff, including the seventh best bullpen ERA. Heading into 2021, the pitching staff was the biggest question mark. But the team has delivered, including Nathan Eovaldi, who has a 3.78 ERA and a career low WHIP. His FIP is 2.39, meaning that the 2018 World Series hero hasn’t gotten any help in the field from his team. Eovaldi is pitching even better than his strong metrics suggest.

But what makes the Red Sox so dangerous is the lineup. The Sox are No. 1 in slugging percentage, with J.D. Martinez back to playing at an MVP level, complimented by Rafael Devers and Xander Bogaerts.

The Red Sox are worth a buy at this price, within one game of first, and with a ton of momentum after the weekend sweep in New York. As a matter of fact, FanGraph projects the Red Sox to finish two games ahead of the Rays.

This price is going to shrink over the coming weeks, and getting in now is a great idea to build a profitable division portfolio.

Join the sportsbook at Unibet.com today and get $20 free, no deposit required! Your first cash bet is insured up to $250 back if you don’t hit a winner.

How ‘Bout Those Yankees? 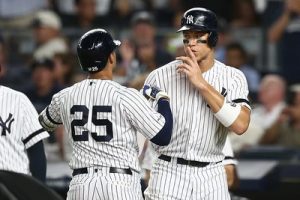 I spoke briefly about the Yankees, but things aren’t pretty in the Bronx. Manager Aaron Boone is under fire by local media. They’re calling for his head for the stale lineup, which is 17th in wRC+.

Despite having a top pitching staff, second in WAR per FanGraphs, the Yankees haven’t been able to generate enough run support to win games. Sure, they could get hot, but they’re priced way too short given the climate around the team.

The club is currently behind the Toronto Blue Jays by a half game. And I’m not rushing to bet the Jays, either. Despite a vaunted offense and the second best slugging percentage in baseball, its pitching staff can’t keep pace with the rest of the division.

The Blue Jays are 14th in ERA, but have been getting lucky to this point, with a FIP that is 20th in the league. There is regression in order for the staff. Still technically in the mix, I expect the Blue Jays to play nothing more than spoiler down the stretch.

Meanwhile, the floor has fallen out from under the Baltimore Orioles, who are sitting at 19-37.