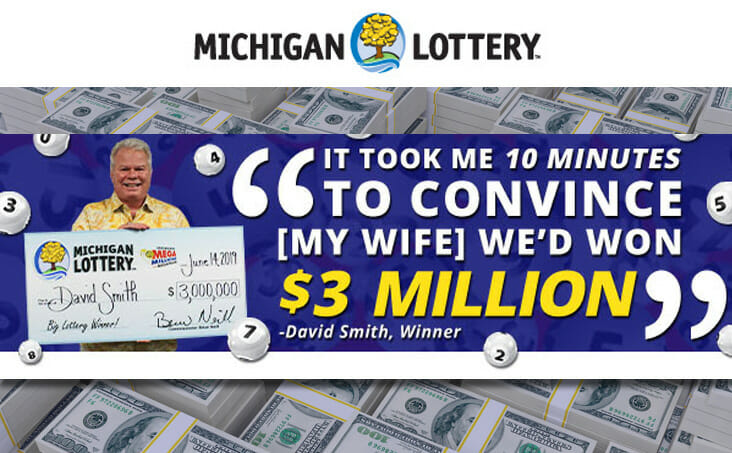 David Smith, a computer systems engineer from Farmington Hills, Michigan, can thank his friend’s wife’s cousin for making him a multimillionaire.

On June 11, Farmington Hills, Michigan computer engineer David Smith was at a business meeting in Grand Rapids when a colleague related the story of his wife’s cousin, who had struggled financially all his life, then bought a lottery ticket and won $1 million.

“That night at dinner I said, ‘Hey, let’s do what Joe’s wife’s cousin did, and we can get rich,” says Smith. “We all laughed about that.”

Luckily, he wasn’t really joking. He logged onto MichiganLottery.com, bought three tickets for that night’s MegaMillions drawing, then threw in an extra dollar for the multiplier (or a Megaplier in lottery parlance).

The next morning, as Smith prepared to head to a meeting in Kalamazoo, it occurred to him to check the results of the drawing.

“I looked at the app, which lights up the numbers you matched. At first, I only saw the first two tickets on the screen—and zero matches. That happens all the time. I thought, ‘How can I pick 18 numbers and not one of them is right?’”

Then he scrolled down to the third ticket and watched in astonishment as five of the six numbered balls lit up—a $1 million win. Thanks to the Megaplier, the figure was multiplied by three for a total of $3 million—the largest prize ever won with a ticket bought at MichiganLottery.com.

“It was mind-blowing,” says Smith. Immediately he called his wife, Kris, a pharmaceutical technician, who was on her way to work. “We just won $3 million,” he told her.

“She thought I was pulling her leg, and she got mad!” he recalls. “We argued for 10 minutes before I said I’d send her a screen shot, so she pulled off the highway and waited.” Smith was so overwhelmed, he fumbled with the screen shot. “Finally Kris googled the winning numbers, and she knew. She was as freaked out as I was.”

Because he did not win the MegaMillions jackpot—it was an estimated $40 million that night—Smith has no option to take annual payments and will get the money in one lump sum. After the state and federal governments skim off their share, he expects to clear about $1.8 million.

“It’s a lot of money, but in today’s world in dollars it’s a little bit less than life-changing,” he says. “The best thing is that I’m 59, I’m looking at retirement in two to four years, and this takes a great weight off my shoulders, financially.” He and his wife plan to complete some home repairs, start a college fund for their grandson, and possibly take a trip to Europe or Asia. “We’re going to get our heads and feet back on the ground and not do something impulsive,” he says. “What this really gives us is peace of mind, and it’s hard to put a price on that.”

Smith says he will continue to play the lottery and appreciates the app because it’s easy and the tickets cannot be lost or stolen.

While winning depends on the luck of the draw, he has some advice for players: “Take the multiplier! That one extra dollar won me $2 million. It’s a better investment than Apple.”