Analyst: Why Singapore’s Likely to Bounce Back Faster 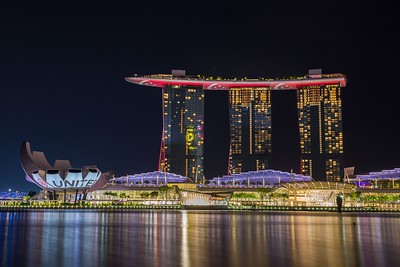 For Singapore, viral outbreaks are nothing new, and safety measures to contain them are ingrained in the culture. For those reasons and others, the gaming market there may return to profitability sooner than many in the West, says gaming consultant Andrew Klebanow. And Marina Bay Sands (l.) and Resorts World Sentosa are already adding billions of dollars in attractions.

For a time, it looked as if Singapore would dodge the Covid outbreak altogether. In March, the World Health Organization (WHO) pointed to Singapore’s aggressive contact tracing and health testing as models for other regions trying to rein in the virus. Through the beginning of April, the city-state had fewer than 600 cases, and its economy and schools remained open.

Then the infection took hold—first among migrant construction workers living in dormitories, then in the general populace. On April 7, non-essential businesses closed as part of a “circuit-breaker” plan designed to quash Covid-19, but by the end of the month, confirmed cases of the virus exceeded 17,000.

Even so, the gaming market there could rebound more quickly than in other parts of the world, including the U.S. The tourism sector, while hard-hit by the pandemic, responded with “professionalism and resilience,” said Keith Tan, head of the Singapore Tourism Bureau—in part because the people there are accustomed to dealing with such crises.

“In Asian cultures, safety protocols like wearing a face mask are routine—they’ve dealt with viral outbreaks in the past, it’s not unusual,” said Andrew Klebanow, of Klebanow Gaming Consultants in an interview with GGB News. “Everybody has a box of masks on hand, and when a virus begins to spread, they put them on, as a normal course of behavior.”

Though this strain of coronavirus is uniquely challenging, Singapore had systems in place to combat it. When the surge occurred, the government, businesses and people took action.

“And the good news for all those gaming jurisdictions is that those are the primary markets they serve. So they’re going to see not a quick but a reasonable ramp-up of business as these travel bubbles develop.”

Perhaps critically, Klebanow added, Singaporeans “obey orders. When the government says ‘Do this,’ they do this. Everybody wears a mask. Everybody stands 6 feet apart. As a result, I can tell you they will tamp down the pandemic in due course and get their business back to normal much more quickly than we’re seeing here.”

By contrast, Nevada “closed for 78 days, but we didn’t get much guidance from the CDC or the state for at least half that time, 45 days.” And on June 2, when people rushed back to Las Vegas casinos, many balked at wearing masks, compelling Governor Steve Sisolak to make face coverings mandatory in public.

According to an April 10 BBC News report, in addition to health checks at airports, Singapore carried out extensive testing of every suspected Covid case; tracked down anyone who had come into contact with a confirmed case; and confined those contacts to their homes until they were cleared. WHO Director-General Tedros Adhanom Ghebreyesus called it “a good example of an all-of-government approach.”

On July 1, Marina Bay Sands and Resorts World Sentosa reopened, with strict health and safety measures in place. For now, access to the casinos is limited to existing members and annual pass-holders, and the facilities will operate at 25 percent capacity.

Cautionary measures aside, in June, Bernstein Research analysts issued a note saying gross gaming revenues in the jurisdiction are unlikely to return to pre-Covid, 2019 levels until 2023.

“While Singapore has a larger locals market than Macau,” the note said, “Singapore would likely take longer to ramp up as it is more dependent on fly-in business and business crossing the border from Malaysia. While slots is majority locals, mass tables and VIP becomes much more non-Singaporean.”

Klebanow said, “Normalcy will return when there’s an effective vaccine and 70 percent of the given population is administered that vaccine. But no one can speculate when that vaccine, of the 150 in development now, will be deemed to be highly effective, and can be manufactured and distributed on a wide scale.”

Meanwhile, MBS, owned and operated by the Las Vegas Sands Corp. and RWS, a Genting Singapore property, just won a 10-year extension of their duopoly. In return for the extension, which will keep other operators out of the market until 2030, each agreed to invest US$3.2 billion in expanding their respective resorts, the first major expansion since they opened in 2010.

So, who got the best of that deal, the government or the operators?

“It was a good deal on both sides,” said Klebanow. “The government, since it entertained the notion of developing IRs in 2000, always had a mandate to grow tourism. They set some high tourism growth numbers and thought IRs would help them achieve that. And they most certainly did.” In 2019, the two resorts combined generated approximately $4 billion in gross gaming revenue. After Macau, Singapore is the second-largest market for the Sands Corp. based on both EBITDA and turnover.

Even non-gamblers are enthusiasts, said Klebanow, and local cab drivers are known to point with pride to Marina Bay Sands, the iconic Moshe Safdie-designed structure with its famous rooftop SkyPark.

“Tens of thousands of people a day go to Marina Bay Sands just to take pictures—it’s a great Kodak moment,” said Klebanow. “Resorts World Sentosa is a true family entertainment destination with a casino resort, a half dozen hotel brands, a Universal Studios theme park and an aquarium.”

While this is hardly an opportune time to take on multibillion-dollar capital investments—MBS, for example, will add a 1,000-room all-suite tower and a 15,000-seat arena, and RWS will add about 164,000 meters (540,000 feet) of new attractions and entertainment offerings—Klebanow said both operators will undertake them willingly.

“Obviously, everyone’s revenue forecast has to be readjusted as we move through this cloud of uncertainty, but if they started building these things today, it’s going to take four or five years for those buildings to open. The market will have certainly recovered by then to accommodate the demand when it comes online in 2024 or 2025.”

MBS, he said, “could have used those rooms years ago. By the time they’re ready, the pandemic will have abated and the business will be there.”

The U.S., now in the grip of the first viral threat in most people’s memory, may be now making all the mistakes other countries have already made, and will likely be better prepared next time. “But right now,” Klebanow said, “we’re 100 miles away from flattening the curve.”