Another Massachusetts Casino? Could Be 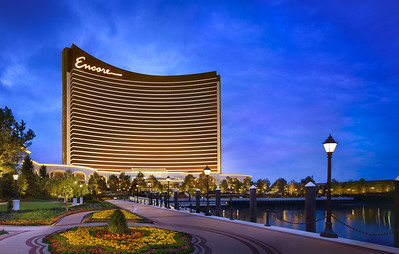 The commission that regulates gaming in Massachusetts has asked the public if it should revive the process to issue a third casino resort license—though the state’s two existing casinos, including Encore Boston Harbor (l.), have underperformed. The license would be for Region C, the southeastern part of the state.

The Massachusetts Gaming Commission (MGC) is mulling whether to reopen a process for approving a third Las Vegas-style casino in the Bay State. The consideration comes at a time when the recently opened casinos are not living up to their hyped profit projections.

If the MGC reopens hearings on a third and final casino license, it would be for the southeastern part of the state, formally known as Region C. It includes Bristol, Plymouth, Barnstable, Dukes and Nantucket counties.

Recently, the commission posted this question on its website: “Does Massachusetts need another casino?” it sought public input on the matter, and also issued a Request for Information (RFI) from interested parties. The public has until March 16 to submit comments. The MGC is also consulting gaming experts on the subject.

MGC Chairwoman Cathy Judd-Stein commented, “We encourage the participation of the public and other interested parties as we conduct critical due diligence on this complex matter that will inform our ongoing evaluation and examination of what is in the best interest of Region C and the commonwealth. The RFI and public comment processes will strengthen our ultimate decision as to whether to reopen the application process for Region C.”

The southeastern part of the state already hosts the one slot parlor authored by 2011 legislation that expanded gaming in the state. That’s Plainridge Park, which was the first casino to open in the state, five years ago. Other casinos in the state include MGM Springfield, which opened in 2018, and Encore Boston Harbor, a Wynn Resorts property, which opened in July 2019.

One reason the last casino license wasn’t issued was the commission’s sensitivity to efforts by the Mashpee Wampanoag tribe to build a $1 billion casino in Taunton. At that time, it looked like the tribe’s efforts would inevitably produce a casino at that location, and the commission was wary about overloading the gaming market. Currently, the tribe’s efforts have been stalled, perhaps permanently, by a court decision that questioned the tribe’s ability to put land into trust.

The tribe is in federal appeals court in Boston trying to overturn that lower court ruling. If it’s successful, that would undoubtedly influence the commission’s attitude towards issuing the third license.

In 2016, the commission declined to issue a license for a $677 million casino for the Brockton Fairgrounds, which was proposed by Mass Gaming and Entertainment. After the Mashpee project was halted by a federal court, Mass Gaming pushed for the commission to reopen its license application. However, commissioners felt that if the Region C license process was reopened, it was more appropriate to allow other bidders to participate. At the time, Mass Gaming’s proposal was the only one submitted.

Mass Gaming argues that not issuing that license denies the state the opportunity to realize profits and taxes from a third casino, especially since it’s unclear whether the Taunton casino will ever move forward.

Recently released figures that show MGM Springfield had its worst gaming revenue month in December, that Encore Boston Harbor is also not meeting expectations, and that Plainridge Park slots parlor is seeing some revenues siphoned off by the two Rhode Island casinos. That’s led some to claim that Bay State’s gaming market may have already peaked.

At the same time, Massachusetts still has not entered the sports gaming market that some experts say would help add revenues to its casinos by giving them an additional amenity that gaming patrons love. It’s already been legalized in Rhode Island and New Hampshire.

Massachusetts House Speaker Robert DeLeo is so far withholding judgement on whether the state’s casinos have failed to live up to their promises. He told CBS Boston, “They will tell you although they may be below expectations, they’re still progressing and making money.” He added, “I can tell you there’s still money coming into the state coffers relative to that. I think it’s still a little bit early to make a long-term determination in terms of the success or failure.”

Although the three casinos haven’t delivered as much as advertised, they’ve paid a total of $525 million in taxes so far.

Before it opened in August 2018, MGM projected $34.8 million per month, but has never exceeded $26.9 million per month. In December, it reported $18.9 million. MGM is floating the idea of selling the property to a real estate investment trust (REIT) and leasing it back. Other casino companies have successfully employed REITs to improve cash flow.

Although more profitable than the MGM, Encore Boston Harbor has also failed to meet expectations. Its December revenue was $54 million, an improvement from the $47 million in November, but still not as good as Wynn Resorts had hoped for its $2.6 billion investment. And gaming analysts note that typically a casino’s best years are its first years.

Commenting on Encore, the speaker said, “Obviously, I’d like to see them do better, but I am happy in terms of the thousands and thousands of jobs, which was important.”