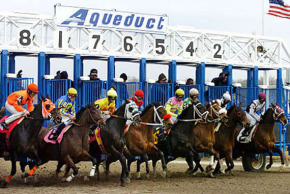 Something to give thanks for on Turkey Day: Bettors have an ally in horse racing.

Thanksgiving Day brings another hot plate to the table. Racing has changed its tune in recent years, offering itself as a complement to—or alternative from—the football-rich holiday. This is a stark departure from the days in which little happened at the track on Thanksgiving. Many establishments used to be closed.

Turkey, mashed potatoes, football and a Pick 6. Racing makes a concerted effort to compete in the pro and college football space.

Aqueduct and Churchill Downs serve the appetizer with a series of excellent races on Thanksgiving Day. Aqueduct holds the $200,000 Fall Highweight and Central Park races, along with the $150,000 Winter Memories event. Churchill, the hallowed establishment that just hosted the Breeders’ Cup, delivers the $200,000 Falls City and $100,000 Cardinal Stakes.

Gulfstream takes a unique road on that day with the Claiming Crown, a de facto Breeders’ Cup for racing’s blue-collar tier.  With the Claiming Crown producing competitive, full fields, its races are attractive betting propositions. Adding to the excitement is the “hometown hero” angle, with starters coming from all regions of the country, large and small betting circuits.

Claiming races are fun and bring nice prices. Horses at this level are not head and shoulders above their competitors. This is an excellent betting scenario.

Will the Lions Win on Thanksgiving?

The generalization, for years, is that the Detroit Lions turned into Supermen on Thanksgiving. Couldn’t beat them, regardless of each team’s season record. That was true years ago, but then they lost nine straight and 11 of 12 and their Turkey Day record is 37-39-2. It’s an interesting note as you watch their line against the Chicago Bears, who just beat them.

Other Turkey Day games include the Washington Redskins at the Dallas Cowboys in the afternoon and the Atlanta Falcons at the New Orleans Saints Thursday night. Offensive fireworks could make that game look like July 4.