This Saturday’s Arkansas Derby, the last major prep race for the Kentucky Derby, comes with clues for bettors—clues and certainties. Just look at the history.

This Saturday’s Arkansas Derby is one of those races where bettors shouldn’t get in their own way. Don’t overthink things. Don’t go too far afield. And understand that certainties exist in this last major Kentucky Derby prep—which is a bellwether prep on many levels.

Those certainties can help bettors narrow down the contenders. The $1 million 1 1/8-mile race at Oaklawn Park gives the Top 4 finishers 100-40-20-10 Derby qualifying points. So both the winner and the runner-up will punch their Derby tickets.

This is the race that gave us Smarty Jones, who pocketed $5 million for winning the Rebel Stakes, the Arkansas Derby, and the Kentucky Derby in 2004.

The 2004 race—and Smarty’s enthralling run at the Triple Crown—put the Arkansas Derby on the map. It became a Grade 1 in 2010, and currently holds court (along with the Florida Derby and the Santa Anita Derby) as one of only three Grade 1 Derby preps on the calendar.

It’s also the race that gave us Curlin, the 2007 Preakness and Breeders’ Cup Classic winner and 2008 Dubai World Cup champion. Curlin was American Horse of the Year for 2007 and 2008, and would be the most recognizable Arkansas Derby winner if not for one other big winner.

That would be American Pharoah, the first Triple Crown winner since 1978. He checked all those boxes and then some, winning the 2015 Arkansas Derby before running the Triple Crown table.

Why This Race Matters

Win the Arkansas Derby, and you go to Churchill Downs for several reasons, way beyond the history of a race that dates back to 1936. Starting with that Depression-era berth, the Arkansas Derby has gotten better over time, and most of its stars ran in the 1980s or later. That’s one reason why overthinking this prep is typically a waste of mental energy.

Horses who win this race typically run well at a 21st century Kentucky Derby. And this year’s Arkansas Derby is kind enough to make handicapping even easier. It features only six horses, the smallest field since 1992, when Pine Bluff came out of the winner’s circle into money finishes in two of the three Triple Crown races. Pine Bluff won the Preakness, and finished third in the Belmont.

Today’s Kentucky Derby rewards pace-setting, pace-pressing, or stalkers with natural tactical speed. And so does the Arkansas. Deep closers need not apply, since statistics show that each of the last four winners have been no worse than third after the first half-mile.

The Arkansas also rewards favorites and Bob Baffert products. Two-thirds of the last 18 Arkansas Derby winners were favorites. That includes the last five:

Yes, Charlatan was eventually disqualified for an overage of the drug lidocaine, but for our purposes, he counts here. After all, he won the first division of last year’s two-division Arkansas Derby, going away at 2/5. And bettors cashed tickets with him.

As for Baffert products, the Hall of Fame trainer’s won three of these races officially. For bet-cashing purposes, since Charlatan’s DQ didn’t affect pari-mutuel payouts, Baffert’s won four of the last 10 Arkansas Derbies, finished second twice, and come in third two other times.

Do the math. Baffert wins this Grade 1 race 40% of the time, and hits the board eight out of 10 times. While there’s no such thing as a lock in horse racing, this is as close as it gets.

Sign up to wager risk-free at WilliamHill.com. If your first bet loses, you’ll get free bets valued at up to $500! 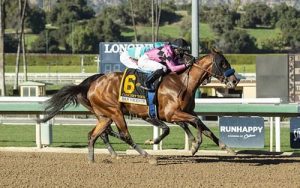 With his Southern California base, Baffert uses Oaklawn Park as his satellite base. He’s shipping in heavy favorite Concert Tour, as well as Hozier. We can dispense with the latter, because Hozier—a.k.a. “the other Baffert”—needs to finish no worse than third to get to the Derby.

So let’s move on to Concert Tour, who pushes every button you want for an Arkansas Derby champ. Look for this horse to be the prohibitive, odds-on favorite. He’s trained by Baffert, who ships him in from California. Only two Arkansas Derby winners in the last decade were natives: Archarcharch (2011) and Creator (2016). And Creator was an outlier in numerous ways: he wasn’t a favorite, he’s a closer and he was Arkansas-based.

Concert Tour is no Creator. Unbeaten in three races after pillaging the Rebel Stakes by 4 ¼ lengths at Oaklawn last month, the son of 2007 Kentucky Derby winner Street Sense owns the best Equbase Speed Figure of the field (106). The only horse within five points of him is native-son Caddo River, who Concert Tour buried by nearly seven lengths in the Rebel.

Concert Tour went gate-to-wire in the Rebel. He’s been no worse than third at any call in his three races, and no worse than second from the top of the stretch forward. He defines tactical speed. And he defines it with perhaps the hottest jockey in North America riding him: Joel Rosario.

Rosario rode Concert Tour to that Rebel victory, where he overpowered four others in the Arkansas Derby field. Hozier was second, Super Stock fourth, Caddo River fifth and Get Her Number—a Grade 1 champion— seventh.

The following week, Rosario piloted Hot Rod Charlie to the Louisiana Derby title. At Keeneland’s opening weekend of its Spring Meet last weekend, Rosario rode seven winners in two days. Along the way, Rosario won five stakes races, including four in a row Saturday. He won both of Keeneland’s Grade 1s: the Ashland Oaks aboard Malathaat and the Madison on Kimari. 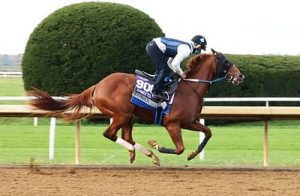 A Wild Card in Caddo River?

The only intrigue here comes from Caddo River, who won the Listed Stakes Smarty Jones by 10 ¼ lengths back in January. He came into the Rebel as the 6/5 favorite and top-shelf Derby futures favorite. He left it as a beaten afterthought. Caddo River was as low as 11/1 at Circa Sports. He’s now 50/1 there and also at WilliamHill.com.

Hot Springs resident John Ed Anthony, who owned Pine Bluff, also owns Caddo River. His hopes lie in breaking out early and finding enough speed to keep Concert Tour off his back. Both of Caddo River’s victories came when he set the early pace. But both of those came at a mile—not 1 1/8 miles.

Again, when you put all this in the blender, the Arkansas Derby doesn’t require deep thinking. It practically handicaps itself. With this Derby prep tour, all you have to do is stay out of your own way, and let the likely second favorite for the Kentucky Derby show you why.

Cash in on Arkansas Derby Day. Sign up to wager at TwinSpires.com and get a $200 sign-up bonus!

The 147th running of the $3 million Kentucky Derby will take place Saturday, May 1, 2021 at Churchill Downs in Lexington. Here are early odds as of April 5.