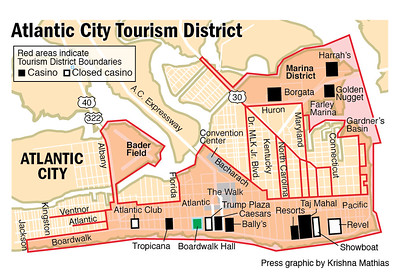 After legislators failed to approve an open-container law in Atlantic City, Mayor Marty Small got it done, at least for now. Small took advantage of the closure of casinos, bars and restaurants to issue an order making it legal to carry open containers of alcohol in designated tourism areas (l.).

Pat Fasano has a vision for Atlantic City. Part of the vision includes people strolling from his night spot, Bourré, on New York Avenue to the Irish Pub on St. James Place with a cup of beer.

Until June 12, it wasn’t possible unless you hid the drink in a brown paper bag. But thanks to a temporary order just issued by Mayor Marty Small, the activity is now perfectly legal on the Boardwalk, around Gardner’s Basin and within the Orange Loop, a developing area off the Boardwalk between St. James Place and New York Avenue, named for the orange properties on the Monopoly game board.

Fasano, a real estate developer, has supported open containers in tourist areas for years. “It gives Atlantic City the atmosphere of New Orleans—bar-hopping, listening to live music, catching a drive-in movie,” he said.

In the wake of the coronavirus pandemic, the order lets people enjoy a summer libation while social distancing between watering holes.

Last December, City Council narrowly approved a resolution urging the state legislature to act on a bill that would permit open alcohol containers in certain areas of the city. But the pandemic got in the way of passing such a law. Governor Phil Murphy’s shutdown of the state made way for the temporary measure.

“We want to help out the people that are in business,” Small told the Press of Atlantic City. “This shows the business community that this administration means business.”

It’s been a long time coming, said Scott Cronick, radio personality with News Talk WOND, and co-owner of the Tennessee Avenue Beer Hall. “Every time I go to cities including Las Vegas, New Orleans, Memphis and many others, I think, `Why doesn’t Atlantic City allow this?'”

It makes perfect sense for a resort where walking is so easy.

“It promotes a party attitude, a laid-back vibe. It encourages jumping from place to place to place, which in turn attracts bachelor and bachelorette parties, convention-goers and those just looking to bar hop,” Cronick said.

Sure, bar-hoppers travel in groups, but everyone in the group goes at their own pace, Fasano said. “You can be at a show at Anchor Rock Club on New York Avenue and then take your drink and catch a show next door at Bourré, and then maybe see a movie at the drive-in theater down the block. New York Avenue is so successful because of its entertainment value, and the stages will be the key driver with this order. Now people will be able to experience more venues while travelling freely with their beverages.”

There’s another side to the story. No stress, as in “no race to finish a drink before you leave a venue,” Fasano said. “We want people to be fluid.”

The gaming industry stands behind the order, said Steve Callender, president of the Casino Association of New Jersey.

“We endorsed the open-container legislation several years ago, and still support it,” he told GGB News. “We want to encourage residents and tourists to come to Atlantic City, and believe this order will attract visitors back to our great city.

“As we work to reinvigorate the local economy, we need all the tools available to help us recover and move forward. We believe creating a positive and festive environment on our iconic Boardwalk is a great start.”

Evan Sanchez, co-founder of Authentic City Partners, has seen the positive impact of open-container laws in cities like New York and Philadelphia.

“We strongly believe that open-container will help to support small businesses and to bring about a sense of revelry that is authentically Atlantic City,” said Sanchez, a millennial whose company is developing properties around the Tennessee Avenue corridor.

The Atlantic City Police Department has also given its support. Deputy Chief James Sarkos said the department worked closely with the city administration to craft the temporary executive order. Beverages must be in a plastic container with the name or logo of the licensed seller. Drinking alcohol in a motor vehicle is not authorized.

“We’re confident we have adequate safeguards in place for this to be a successful addition to the many great things Atlantic City has to offer,” Sarkos said.

The executive order will expire in November, or whenever coronavirus-related restrictions on bars and restaurants are lifted by the governor.