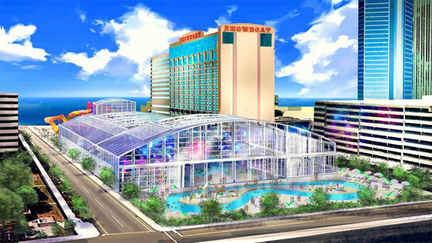 In Atlantic City, a planned water park (l.), renovations at Bally's, a new restaurant, the return of concerts and even fancy restrooms are among the signs that the city might get back to normal in 2021.

A vacant lot at the corner of the Atlantic City Boardwalk between the Showboat hotel and Ocean Casino Resort could host the resort’s first water park.

The final piece of the puzzle for the $100 million attraction dropped into place on December 29, when the state Casino Reinvestment Development Authority (CRDA) approved a 20-year tax abatement program for Philadelphia investor Bart Blatstein. Blatstein can recoup $2.5 million a year in sales taxes generated by the 100,000-square-foot project.

“Atlantic City’s best days are ahead of it,” Blatstein said. “I read the press sometimes and I scratch my head to the point that I get a bald spot on it. I don’t think they realize Atlantic City’s potential.”

Atlantic City Mayor Marty Small told the Associated Press the new attraction “is a true game-changer. This will take our city to the next level (and) give us a much-needed family attraction. If you build it, they will come.”

The indoor year-round water park is one of the few capital projects expected to materialize in 2021 as the resort battles the coronavirus pandemic. The virus has decimated the tourism industry, not just in Atlantic City but everywhere in the world.

Optimists see a way out through vaccinations, but others say the inoculations are only the beginning of the end for the pandemic.

Still, at casino hotels in Atlantic City, there is hope that at least some pre-pandemic attractions can return this year. Headline entertainment is slated to return soon. New restaurants will open. Renovations will take place.

But major capital projects will be rare. In addition to its involvement with the water park, the CRDA will spend $4 million this year to renovate seven Boardwalk comfort stations, said spokeswoman Karen Martin.

Renovations will include gutting existing interiors and replacing toilets, urinals, fixtures, and faucets, and installing new heating, plumbing and ventilation systems. The redesign will feature tile floors and walls that provide a visual accent tying finishes back to the Boardwalk.

Toilets, faucets, soap dispensers and hand dryers will all be touchless. All surfaces will be constructed of materials which are easy to clean with current Kyvak cleaning system.

Ocean Casino Resort will open the Cove high-limit slot section on January 16. A 7,450-square-foot area adjacent to Wahlburgers, the Cove will offer more than 140 slot machines from Aristocrat, IGT, Konami, Scientific Games, Everi and Ainsworth, with a combination of classic and new games, including Lightning Cash, Dragon Cash, Dollar Storm, Wheel of Fortune, Jeopardy and more. The area will also offer dedicated cocktail service with an enhanced beverage selection, private restrooms, and a cage exclusively for guests playing in this section.

“It is so exciting to be able to offer this for our guests. We could not be happier with the results, as we welcome this latest addition to our growing property,” said Ocean CEO Terry Glebocki.

For the spring, Ocean has confirmed concerts by the Beach Boys in April and Aaron Lewis in May. The hotel is also finalizing plans for other casino floor enhancements in 2021. “Most will be in place by summer and will include hundreds of the newest slot machines,” Glebocki said.

Hard Rock Hotel & Casino Atlantic City has plans for projects to enhance the guest experience, said Joe Lupo, property president. “However, we’ll wait for the pandemic to subside and understand our financial projections before confirming any new projects.”

Concerts set for June at Hard Rock Live include Pitbull and Train. August highlights include Rod Stewart and Kiss. Sound Waves begin in March with Christopher Cross. Joan Jett & the Blackhearts will visit in April, Frank Caliendo in May and Blues Traveler in August. Again, the status of the pandemic and occupancy restrictions could cause the casino to rethink the lineup.

Still undecided is the fate of the annual summer beach concerts funded by the CRDA. “It has not been determined what outdoor summer entertainment, including beach concerts, will be offered in 2021,” Martin said.

Resorts will open Dougherty’s Steakhouse and Raw Bar in the spring, replacing the popular Gallagher’s Steak House. Dougherty’s comes courtesy of two iconic brands in Atlantic City: Dock’s Oyster House and the Knife & Fork Inn, each in business for over a century.

“We’re thrilled to partner with the Dougherty family, owners and operators of Dock’s Oyster House and The Knife & Fork Inn, to provide our guests with new, mouthwatering dishes,” the casino posted on its Facebook page.

In addition to the upscale menu, the restaurant will feature live entertainment.

The new owners of Bally’s Atlantic City have committed $90 million to renovate the property. The money will refurbish rooms, add suites, bring in new restaurant brands and more gaming options, and renovate meeting and convention space, among other improvements. And of course, a sportsbook to replace the one Caesars took in the sale of Bally’s to what is now Bally’s Corporation. The sportsbook will be FanDuel’s second in New Jersey, the other being at the Meadowlands Racetrack outside New York.

“We want to make sure Bally’s is competitive again and return it to its former glory,” said Marc Crisafulli, a Bally’s executive vice president. “We’re committed to making it a signature property again at the center of the Boardwalk.”

At Steel Pier, across the Boardwalk from Hard Rock, several capital projects have been placed on hold as a result of the pandemic with a goal to move them forward in 2022.

“We are going to plan our 2021 season with all of the protocols in place that we had last year just to be on the safe side. Even if things are better, we’ll still be conservative but ready for business,” said Anthony Catanoso, president of Steel Pier.

Catanoso welcomes the water park proposed next door at Showboat. “It would be a great addition for the city. There could be synergy between Steel Pier and the water park.”

The neighbor on the other side, Ocean Casino Resort, feels the same. “Ocean looks forward to the water park and other added attractions,” Glebocki said.

Will Blatstein make good on the water park? Such proposals haven’t had a good track record. In 2012, developer Tom Sherwood proposed a sailboat-shaped hotel and water park in the Marina District. In 2017, investor Ronald Young, who failed in his efforts to build a hotel at Bader Field, an historic former airport, and also planned to purchase the shuttered Atlantic Club, which he would run as a hotel with an indoor water park, according to the Associated Press.

Not a single one of these projects broke ground.

Michael Busler, professor of finance at Stockton University, doesn’t see past failures as an indicator of what’s to come, especially when water parks in the Poconos have proven successful. “The others faced problems with financing,” he said. “Blatstein has access to better financing.”

Blatstein’s own track record is another issue. He took over Atlantic City’s Garden Pier in 2016 and has done little to develop it as yet. His attempt to make a go of the former Pier Shops at Caesars, converting it into the Playground in 2015, ran aground, and Caesars took back the Boardwalk property last year.

“Bart did not do well with the Playground, and although he says he’s profitable at the Showboat, I’m not sure that is the case,” Busler said. “He’s taking a risk, but he believes that Atlantic City must have more year-round, family-friendly attractions. He hopes the water park will be a destination draw that helps his Showboat, as well as being profitable itself.”

Will the virus get in the way?

“By June of this year, it appears that the vaccine will have been administered to about 70 percent of the population, which should be enough to wipe out the virus,” Busler said. “Assuming that happens, by this summer things should begin to return to normal so when the water park opens the virus should not be an issue.”

The CRDA says Blatstein has a time schedule if he wants the tax break.

“Construction must commence within two years of the approval of this project on December 29,” Martin said.