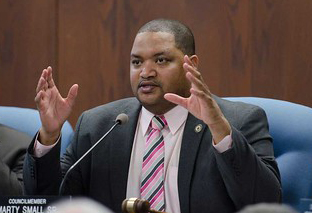 The New Jersey legislature approved an extra tax for municipalities and counties that host sportsbooks at the state’s two racetracks. But when it comes to Atlantic City, those revenues go to the Casino Reinvestment Development Authority (CRDA) to promote the city. Mayor Marty Small (l.) feels his city is getting shortchanged.

As of September 20, the Borough of Oceanport, New Jersey, expected to receive $172,570 as its share of sports betting revenue as the host site for Monmouth Park Racetrack.

The sports betting tax money can’t be spent on anything Oceanport decides, said Mayor Jay Coffey: “It has to be put to use for economic development.”

Economic development covers a lot of ground, according to the state: transportation and infrastructure, tourism, public safety, and properties located on or near the racetrack.

But the share to Atlantic City for hosting casino-based sportsbooks: zero.

And Mayor Marty Small Sr. is not happy about the situation.

“In 14 months, New Jersey has overtaken Las Vegas as the No. 1 sports betting destination, and a lot of it has to with the success of Atlantic City and online,” Small told a tax forum. “But we don’t get one penny. … That’s unacceptable.”

Small wants the additional sports betting tax from the city’s eight sports betting venues to go toward property tax relief, even if the law limits where the revenue can go.

“My first, and foremost goal, as it was as council president and will continue to be as mayor, is more ratables for the city and more revenue streams to offset our taxes,” he said.

Make no mistake. Sports’ betting has boosted the city’s casinos and their online gaming partners. Wagering has also grown state tax coffers. According to an article in the Press of Atlantic City, New Jersey sportsbooks have accepted more than $3 billion in legal wagers, generating $284.6 million in gaming revenue and more than $36 million in taxes.

In 2018, lawmakers approved an additional tax on gross sports betting revenues, including what the race track hosts get. The bill also mandated that an additional 1.25 percent tax generated by an Atlantic City casino from sports betting or a joint sports wagering operation, go to the Casino Reinvestment Development Authority (CRDA) for the marketing and promotion of the city.

The disparity in how New Jersey treats Atlantic City as a gaming jurisdiction compared to how other states handle theirs is not lost on industry experts.

Michael Pollock, managing director of Spectrum Gaming Group, told the Press New Jersey’s reluctance to allow the city to directly recoup a portion of the revenue may be a function of the history between the state and city.

“There has never been a great deal of confidence in the municipal government of Atlantic City to effectively manage its finances,” Pollock said.

Assemblyman John Burzichelli, a Democrat who represents Cumberland, Gloucester and Salem counties, said the legislation is not a reflection of how the state views Atlantic City’s ability to effectively manage its finances. He said the other sports betting municipalities do not have a redevelopment authority like Atlantic City does with the CRDA and that the provision reflects that dynamic.